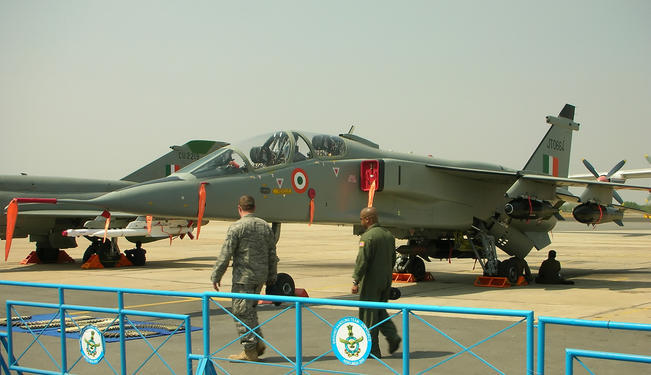 In the face of regional threats, India needs to undergo military modernization

Talking of defense preparedness, initial thoughts go to modernizing and equipping but when these are compounded by other military related factors, downward spiral is an abyss. Higher defense structures of India remain defunct with the military kept away from strategic security decision-making. India still has no national security strategy, and national security objectives remain undefined. Therefore, primary focus of civilian intelligence agencies is to bring down political opponents. The Ministry of Defence (MoD) has no institutionalized set up for strategic thinking and is without military expertise. No chief of defense staff has been appointed. The HQ Integrated Defence staff, which was to be part of the MoD, has come up as a separate headquarters. Services jointness, interoperability and revolution in military affairs are a misnomer. The services have not even developed standard protocols. Even the National Security Council, which is an advisory body, has reportedly met just once in the last three years.

The Indian foreign minister described the 19 kilometers-deep Chinese intrusion “a small acme on the face.” China makes repeated intrusions in areas that are held by the Indo-Tibetan Border Police (ITBP) with zero operational experience. Moreover, the ITBP demonstrate ineffectiveness, operating under the Ministry of Home Affairs with the home minister saying: “We have no jurisdiction in the area.” Yet the political hierarchy refuses to put the ITBP under command the army.

On top of this, a gag order bars the military from making any statement about China but can talk about Pakistan. Nehru’s disdain and policy of sidelining the military has continued over the years with service chiefs repeatedly downgraded in the order of precedence. A joint secretary level officer represents the government at the funeral of a field marshal. Military personnel are forced to approach civil courts to get their authorized financial dues, while the government has ignored Supreme Court decisions in this regard for years. The media hallucinates about possible army coups and the robotic prime minister has nothing to say. Following the recent cross-border Pakistani raid that killed five Indian soldiers, the minister of a state said: “People join the military and police to be killed.” Neither the chief minister, nor the central political apex have the guts to remove this joker of a minister. India has pointedly failed to develop its border infrastructure in sharp contrast to China’s superlative efforts on this count – a serious disadvantage to India’s defense preparedness.

Military modernization has been the biggest casualty under the current longest-serving defense minister. The military-industrial complex is at its lowest ebb, with the army seeking to import 66,000 assault rifles and 44,000 carbines – despite India boasting the white elephants of the Defence Research & Development Organisation (DRDO), scores of defense factories under the Ordnance Factories Board, and a host of public sector undertakings with a vice-like grip on the defense sector, having little accountability and failing to meet military requirements.

The MoD is currently conducting a probe into allegations of irregularities in the proposed procurement of 145 x M-777 ultra-light howitzers from the US in a deal worth $847 million — the probe being sparked by an anonymous letter. This comes despite the Indian army having fully evaluated the howitzer and selected it. The timing of the anonymous letter is perfect when, as per the MoD, the deal was on “the verge of finalization.”

Nothing has really changed over the past three decades as well. In 1980, 17 x 5.56 assault rifles from 11 countries were tried out to equip the then-three Parachute Commando battalions of the Parachute Brigade, but the deal was shelved on basis of another anonymous letter. The 17 assault rifles were then  given to the DRDO, who took 15 years to produce the current 5.56 INSAS, which is nowhere close to state of the art. The MoD’s emphasis on propriety is understood, but the penchant to ban firms at the drop of the hat without alternate arrangements to fulfill voids in time is senseless. Individuals must be punished, but stonewalling military modernization is criminal with enlarging China-Pakistan collusive threat. Ironically, the politico-bureaucrat-mafia nexus in scores of defense scams always goes scot-free, including under the current dispensation. Equally significantly, both China and Pakistan have developed advanced capabilities in the asymmetric field, but the Indian political hierarchy prohibits development of a requisite deterrence.

No new gun has been inducted into the artillery since the Bofors scandal of 1980s. The DRDO sat on designs of the Bofors gun for three decades and has now woken up to the need for national arms-manufacturing. The defense minister, A.K. Antony, admits: "New procurements have commenced… but we are still lagging by 15 years.”

Due to delays, enormously multiplying costs for the same equipment are incurred. The army’s air defense equipment is almost completely obsolescent. The indigenous Akash (meant to replace the Schilka) failed miserably in army trials and has been given to the Air Force as part of layered air defense of vulnerable areas. The BMP-1 and BMP-2 of the Mechanized Infantry also needs to be replaced. Aside from state of the art assault rifles and carbines, infantry equipping in terms of mini UAVs, shoulder fired missiles, BFSRs, HHTIs, sensors to boost surveillance, the Battlefield Management System, Battlefield Surveillance System, and so on, all need speeding up. Then is the need to boost operational capabilities of army aviation, engineers, signal communications, reconnaissance, surveillance, and target acquisition. The need for establishing the Tactical Communications System was never more urgent.

The Indian Air Force is upgrading its vintage MiG-21 interceptor aircraft and plans to eventually retain only 125 of these. Phasing out is scheduled by 2017, replaced by the indigenous Tejas aircraft, which is way behind schedule. There have been several MiG-21 (famous as “flying coffins”) crashes, with many pilots killed over the years. The IAF plans a fleet of 42 squadrons as new aircraft enter service and numbers recover. The Indian Navy is currently undergoing a 15-year modernization plan. The Russian aircraft carrier Gorshkov is likely to join by next year. India’s first indigenous aircraft carrier is likely to be commissioned by 2017-2018. In case of the BrahMos cruise missile, land and ship-launched versions are already in service and the air-launched version would join shortly. Underwater test firing of BrahMos has been successful. The BrahMos-II is also under development with an estimated range of 290 kilometers and speed of Mach 7. To meet operational need of a medium range cruise missile, India will have to go indigenous as developed nations are doing.

Pakistan has developed two versions of cruise missiles: the Ra’ad and Babur, which has a range of 700 kilometers through reverse engineering of unexploded US Tomahawk cruise missiles lost over its territory in 1998 and due to assistance from China and North Korea. They can carry both conventional and nuclear warheads. To this end, India’s development of the indigenous medium range cruise missile, "Nirbhay," is somewhat slow — though it can catch up.

The maiden test of Nirbhay on March 12, 2013, had to be aborted after 20 minutes of flight as it started deviating from its course. Once operational, Nirbhaya will enhance strike range of India’s cruise missiles and boost the country's nuclear triad’s second strike capability through the combined punch of the submarine-launched K-15 ballistic missiles and Nirbhay cruise missiles. Nirbhay is designed to fly at an altitude of 500 to 1000 meters at a speed of 0.67 Mach and is likely to have multiple warheads. The naval version will have longer strike range for effective second strike capability in case of nuclear war, and will be booster equipped. The naval version will be capable of carrying a 250 kg nuclear warhead and have a strike range of 1200 kilometerstravelling at a speed of Mach 7.

The Nirbhay must progress from subsonic to supersonic and eventually to hypersonic versions in order to make it invincible. India has never followed the reverse engineering route as is diligently done by China and Pakistan, enabling leapfrogging of technology. However, much catching up is needed by India in the space, cyberspace, and electromagnetic domains which are essential to balance out the existing asymmetries.

Ironically, the US is hell-bent on handing over Pakistan its cherished strategic depth in Afghanistan on a platter. a America’s continued support for Pakistan’s military will aggravate unconventional war and terror at the cost of India, even as the Obama administration wants to obfuscate its own misdeeds, blaming India for the problems in Pakistan, Baluchistan, and Afghanistan. Concurrently, the chances of an India-China limited conflict appears plausible in the near future.

The question that MoD officials need to ask themselves is can they provide the Indian military with the operational capabilities that are needed or will the service chiefs have to repeat what the army chief said during the Kargil conflict: “We will fight with what we have”?