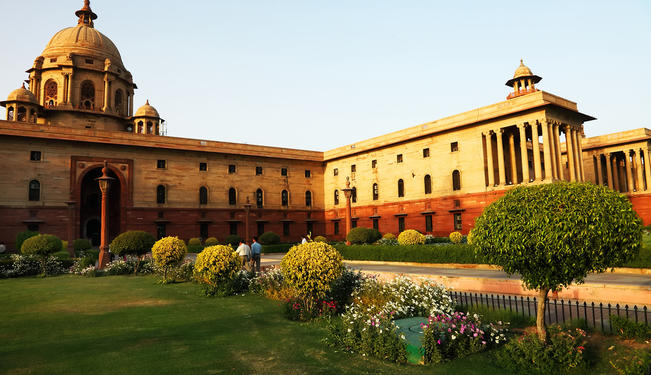 Old men dream of coming back to power, but it is young India who will decide the future.

On August 11, when Narendra Modi, the Bharatiya Janata Party (BJP) campaign committee chief as well as the party's prime ministerial aspirant, sounded the poll bugle for the 2014 Indian general elections with a phrase borrowed from US President Barack Obama’s “Yes, We Can,” it was not just an inspirational sentiment he was recreating but instead an articulation of the hopes and aspirations of a young India. With more than 65% of India's population under the age of 35, Modi was trying to nudge this young segment against the gerontocracy and dynastic rule that has been a characteristic of the political leadership.

This article is not about dissecting Modi or his policies or whether he is the right choice put forward by India’s biggest opposition party to lead the country. Instead, today, as India turns 66 on August 15, it will be a youthful India taking on the world — its working age population is rising by approximately 12 million annually — with its dreams, ambitions and expectations that are bereft of the “isms” and chasms of temple-mosque politics.

In the 2009 polls, 43 million new voters exercised their franchise and sent 79 members to the 15th Lok Sabha (lower house of parliament), all below 40 years of age. And in 2014, a new clutch of voters will be added to this 43 million, who will cast their ballots for the first time and the young MPs mark may even cross a hundred. The idea was that young members of parliament will echo their voice in the corridors of power and bring in change, write out and deliver policies for a tomorrow that will take them to the next level when old India will pass into posterity. Instead, it is still the old India setting the directives for a tomorrow which it will never see, creating disconnect with what young India perceives.

One of the news magazines, Outlook, in a recent article pointed out that even after four years, as many as 36 of these young MPs, including Rahul Gandhi — the son, grandson and great-grandson of India’s prime ministers — are yet to ask a question, while as many as 12 MPs are yet to participate in a debate. It came as no surprise that in 2011, when the youth rallied under the banner of the anti-corruption crusader, Anna Hazare, as he embarked on a hunger strike for Jan Lok Pal — a law that in pure and simple terms would bring to book the corrupt, irrespective of the office of power they hold. For a nation deluged by scams, scandals and corruption, this 76-year-old man from a remote village in Maharashtra became the voice of young India, as he took on the political class, even threatening to lay siege to parliament.

Even as the country stood behind this Gandhi-topi wearing crusader as he went on a fast at Delhi’s Ram Lila grounds, these very parliamentarians, elected and sent to represent them, remained aloof, keeping their lips sealed. There was disappointment, disillusionment and disgust, even a sense of betrayal as the youth came out on the streets waving the national tricolor. It was not about a party or a leader; they all wished for one simple thing — change. But what the young India failed to understand and realize when they sent one among them to parliament, was that each one of them was carrying baggage: They were from political families, promoting a legacy.

Be it the youth icon that Congress is popularizing, Rahul Gandhi — carrying the Nehru-Gandhi legacy — or Jyotiraditya Scinda, Jitin Prasada, Milind Deora or Sachin Pilot, they all have their father’s armband on their sleeves with the symbol of Congress firmly etched over generations.

But it isn't just the Congress: Anurag Thakur of the BJP, the party’s young star and answer to Rahul Gandhi and son of former Himachal Pradesh Chief Minister Prem Kumar Dhumal; Supriya Sule, daughter of Maratha strongman and NCP Chief Sharad Pawar; Harsimrat Kaur Badal, wife of Punjab Deputy Chief Minister Sukhbir Singh Badal; and Dimple Yadav, wife of Uttar Pradesh Chief Minister Akhilesh Yadav — to name a few — have all derived their lineage from political families, having made it to parliament by virtue of being either the son, daughter or daughter-in-law of the party leader.

So, it is no wonder today that these young parliamentarians who were supposed to be outspoken, and come up with out-of-the-box ideas, have remained silent rather than having tried to justify their party’s stand. When the whole nation rose in unison against the brutal gang-rape of a 23-year-old student in Delhi in December last year and came out braving the water cannons and batons unleashed on them by the government, these young scions chose to shy away, retreating to the plush confines of their interiors. Forget giving support and strength, they did not even utter a word for the girl who mirrored the aspirations of the country’s youth.

The anger and angst witnessed on the streets is a manifestation of government policies and a paternalistic attitude towards select constituencies that have not kept in step with the changing times. These young MPs, instead of changing the stride and steering the policies towards a new India, have stayed behind with the old guard, dragging the country into an abyss of deprivation and moral turpitude.

A case in point is the action of the youngest chief minister of India’s most populous state of Uttar Pradesh, the 40-year-old Akhilesh Yadav, who decided to suspend a 28-year-old IAS officer Durga Sakthi Nagpal for taking on the sand mining mafia. The ruse to suspend her was based on the claim that she pulled down a wall of a religious structure. But the distortion became clear when an official report concluded that it was the villagers themselves who took down the illegal construction, declaring Nagpal to be blame-free. Akhilesh came to power on the promise of changing the caste-ridden state of its old age notions and fast-tracking it on the path of development. But after 17 months in power, Akhilesh has all the trappings of his father, Mulayam Singh Yadav. The state has witnessed the highest number of riots, a complete law and order failure, and the young Yadav scion appears to be just another cog in the Samajwadi Party wheel that his father controls.

For India to get on to the next growth phase, a young workforce alone will not be sufficient. It has to have a definite roadmap to tackle rising prices, corruption, job creation, law and order, education and health. And the complacency of old India is not going to help. There has to be a sense of urgency for the reforms — be it economic or political. For the youth of India know that they can bring about the change, and even as the old men dream of coming back to power, it is the young India that will decide the future course of action.

*[The author wishes to remain anonymous and has used a pseudonym.]