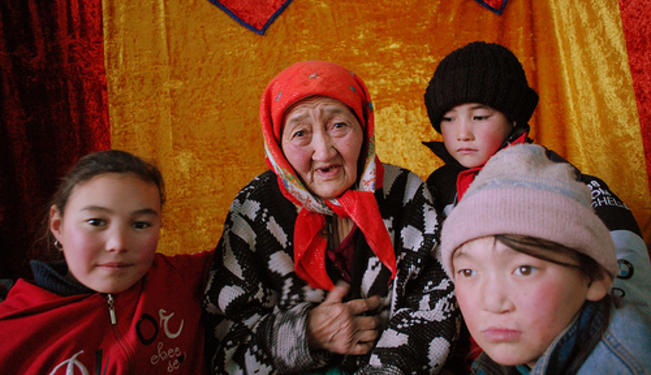 Even as Asia has been booming, the Arab world awakened and Africa now rising, Russia's "near abroad" is now on the ropes. The expectations following Independence have been dashed. Here is an account by someone who lives and works that regional trauma.

What happens if the current trends continue? What if Central Asia continues on its current path? What might life be like in 2025?

The current situation is characterized by little attention being paid by local governments and international donors to citizen opportunity within Central Asia. Rather attention is paid to securing the current order – drug trafficking, migration control, counter-terrorism and resource exploitation. These dominate the views of those who bother to look at Central Asia.

Private and public donors are increasingly leaving the humanitarian space to military actors and treaty organizations. If we look forward a little more than a dozen years, the current trends are not encouraging for Central Asia.  By 2025 Central Asia will be split between the resource rich countries of Turkmenistan and Kazakhstan and the new age basket cases of Kyrgyzstan, Tajikistan and Uzbekistan.

Kazakhstan and Turkmenistan will look outward while the rest of Central Asia looks inward and implodes. Kazakhstan will link with the Caucuses, Russia and Europe as the land bridge with China, the regional fuel depot and distribution hub. Turkmenistan will have completed its integration into world trade regimes. It will resemble an Arabian petro-state in structure and sustainability. By 2025 Turkmenistan’s biggest concern will be its dominant trading partner, Turkey.

There is danger ahead for the resources rich Central Asian countries. Russia and Turkey could become covetous. The rising wealth may leave a large plurality of the population dissatisfied enough to spark widespread civil unrest. Western powers seeking greater influence may foment destabilizing democratic revolts. The decade following the NATO withdrawal from Afghanistan will likely mean an influx of arms and some militants. This is the present concern of many donors but interest will wane if Iran becomes more dominant in the region. The Afghan contagion is likely over blown by security analysts. The border is long, porous and sparsely populated. NATO is not the first power to beat a retreat from Afghanistan. A level of lawlessness will settle in the region. The rich will employ body guards, walls will get higher and expats won’t venture far from cities.

Uzbekistan, Tajikistan and Kyrgyzstan will define the rest of region as a quagmire of marginal, nationalistic, mini-states of no significance. They will become less educated and more inequitable in the areas of access to land, water, education and health care. There will be a deep divide between rural and urban populations. Within the rural populations large landowners including foreign agribusinesses leasing tracts from government will dominate reconstituted collective farms. Most rural families will subsist on day labor and remittances.  Urban slums will begin to manifest themselves as older downtown buildings are replaced by government enterprises and high rises. The second generation of ruling elites will hold power by keeping the people isolated and unaware, demonizing the neighboring nationalities and the minorities within their borders.

At the household level, a vicious circle will perpetuate itself. High levels of poverty will continue to lead to increased vulnerability to natural disasters, leading to families being highly affected when natural disaster strikes, leading to higher levels of poverty and vulnerability. As household coping mechanisms and food security are weakened the impact of natural disasters on vulnerable households make a geometric progression toward household level catastrophe. Household debt increases and becomes a significant burden forcing further coping mechanisms that erode material and human capital. It will be common for many households that can’t afford to heat or eat to resort to the “chai chapatti” diet, consisting of tea and bread. It is a diet both protein and micro-nutrient deficient, lacking the kilo calories of even an emergency food ration. Children of Central Asia living in this state of chronic poverty are as vulnerable as children in emergencies to a lack of access to health care, protection and education. There will be no reversal in the long term effects of poor diet and care as stunting remains stuck in the 20-30% range. Poor mothers who are by 2025 two generations past the benefits of the Soviet system’s universal care increasingly rely on local traditional healers and quacks. The qualified doctors have migrated or are working in urban clinics. For those parents with no resources and little knowledge, health care for their children will have become unattainable.

Educational opportunities range from poor to dismal. By 2025 they will range from dismal to abysmal. The construction of schools has not and will not keep up with the population. Even in parts of rural Kazakhstan, the richest country in the region, access to services is lagging, but a government commitment to education and health care seem to be closing the gap. In the poor south western quadrant of Central Asia services continue to deteriorate.  In the poorest – Tajikistan – an additional 3,000 schools (costing $100 million) are needed along with 45,000 new trained teachers. Throughout the region most children will continue to attend school in shifts. Grades will be bought. Teachers will seek fees. Degrees will be known in 2025 to be worthless. As the third post-independence student cohort enters adulthood, few will graduate secondary school. Fewer still will be able to pass a standardized test in any subject.

As advanced literacy slides into basic literacy the digital divide will widen. There is little reason to believe internet access that is available in 2% of homes will become universally available even in schools. The internet in Central Asia will be the domain of men and boys. This will further divide men and women. Men will increasingly occupying a real and virtual world of music, conversation, games and sexual mores unknown to their spouses who occupy the world of the home. Migration will further aggravate this divide by gender and generation in families.

Migration within the region and to Russia is breaking up families. In the 12 years of this century migration has taken over as a dominant income earning strategy. All the dreams touted by micro finance programs are realized with remittances. The family climbs, briefly, out of debt. Small enterprises are started and abandoned. Livestock is bought and sold, houses are built and medical procedures are paid for. A worker from the family in Russia is a safety net. It is a safety net that ensnares families as often as its saves them. Children are pulled out of school to assist with household and day labor chores their overworked mothers’ can no longer handle in the absence of their husbands. Young girls are taken out of school and kept at home under the tutelage of mothers and grandmothers to protect their honor. With few adult men at home, families are under a great deal of pressure to protect the honor of adolescent and teenage girls. Keeping them home from school and working at home is the most logical choice for parents.

These are not irreversible trends. These are problems that can be addressed. Instead a spending millions each year on education policy reform,  build schools. Instead of training border guards to catch smugglers, teach teachers to actually teach and pay them. Instead of letting contracts to outsiders to build roads and infrastructure, keep the men in the region by employing them to build their own infrastructure. Instead of demonizing each other, Central Asians from their youngest years should find their common ground and strength. Instead of encouraging cash crops encourage growing edible local produce. Most of these actions will not enhance the security of the donor community or add much toward short term world trade patterns. It won’t change the course of world history. But it will change the lives of millions of Central Asian children who are in first grade this fall by dictating whether they have a chance to thrive or be forced to founder in 2025.