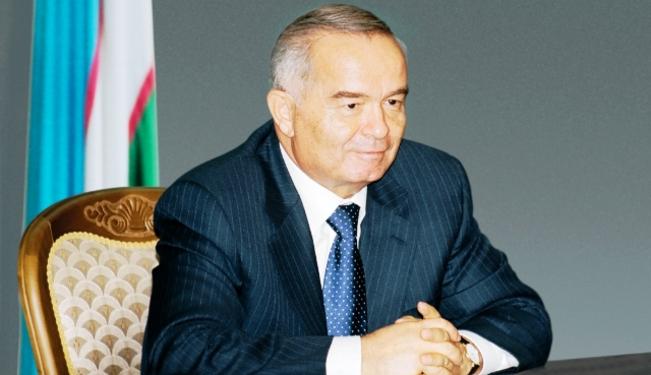 Perspectives and scenarios for regime transition in Uzbekistan.

* The Arabic: طاغوت (taghut) means to “cross the limits, overstep boundaries” or “to rebel” vis-à-vis divine authority. Traditionally a term connoting idolatry, it is mentioned in the politically significant Qur'anic verse 4:76. During the medieval period, it has was used by Muslims to describe the rampaging Mongol khans and their vassals. Today, in contemporary Islamic political theory, it has come to be used to describe dictatorships, i.e., as violating the will of God.

Although it can take some more years, eventually it's only a matter of time before Uzbekistan's ruthless authoritarian leader, Islam Karimov, dies from old age. In a three-part analysis series, Ghent University's Dr. Bruno De Cordier and NewEurasia.net's Christopher Schwartz examine whether indeed all hell could break loose when he finally does, and whether the Karimov regime's choices, both now and in the future, shall place their country on a direct path to Islamicization.

As Uzbekistan's ruthless authoritarian leader, Islam Karimov, turns 74 this month and celebrates 20 years as president, he must be hearing the sand-drip of the hourglass in the back of his mind. So, too, is his entire country, and indeed, much of the world, as everyone is beginning to wonder: what shall happen after he is finally gone?

Forecasting can sometimes be tricky, if not illusory. The danger of wishful thinking or reading the available data completely wrong is real. An expected or an abrupt death, reasonably natural in appearance or blatantly suspicious, in the presidential palace, while on a state visit abroad, or during a meeting overseas – these “little” factors shall actually determine a lot of whether Uzbekistan undergoes a transition either terrifyingly swift, surprisingly calm, or rocky and inconclusive. The devil of contingent details enjoys this guessing game because only he knows the nitty gritty of the how and why. Nevertheless, the inevitable death of Karimov promises to be a major turning point in the history of post-Soviet Central Asia, and so readers of the political signs we must be.

An obvious method of predicting what could transpire is to analyze other authoritarian regimes and re-apply the lessons to Uzbekistan. In this “redux approach,” the most ready characters for comparison are Turkmenistan'sGurbanguly Berdimuhammedov, Romania's Nicolae Ceauşescu, Libya's Muammar Gaddafi and Syria's Bashar al-Assad. These scenarios boil down to: quick death and smooth transition with little change, quick overthrow and smooth transitions or long overthrow and rough transition with either outside military intervention or not. Most importantly, only a few of these scenarios offer any potential for change.

Berdimuhammedov’s swift rise to power in late 2006 based on a bloodless palace coup and widespread shock, stoicism or apathy among the grassroots of Turkmen society, led to no change. This type of scenario in Uzbekistan would end in “stability” because the appropriation of national resources would not change, particularly in the most lucrative industrial sectors (natural gas in Turkmenistan, cotton in Uzbekistan), and totalitarian oppression of the masses (notoriously flamboyant in Turkmenistan, but no less insidious in Uzbekistan) and the deep secrecy with which the regime makes decisions would remain.

The fall of Ceauşescu in late 1989 was preceded by unstructured social unrest in the provinces, followed by violent protests in the capital that culminated in the demise of the president, his family and their key cronies. Applied to Uzbekistan, much can potentially change depending upon the leaders of the revolt. We've seen some sort of Ceauşescu scenario in Kyrgyzstan in 2005 and 2010 but the first revolution, which saw the rise of Kurmanbek Bakiyev, also experienced a reversal of gains for the general public, both in terms of civil liberties and prosperity. Moscow and Beijing would prefer a transition similar to Berdimuhammedov’s but Washington, Brussels and the major European capitals would be left feeling morally queasy. In a case like Ceauşescu’s, Moscow (if not implicated in the coup) and Beijing would likely cringe and try to influence the results via their intelligence services and economic levers. In the West, only Brussels might have some sway over the situation while Washington could only tentatively approve but have little ability to shape the course of events.

In a situation similar to Assad’s, demonstrations in places like Ferghana or Urgench, joined by a mutiny within the armed forces and police, would drive out still-loyal security forces. Rebels could consolidate control over their own areas, creating a civil war with frontlines or unraveling Karimov's position in his own regime. This would force him to flee and be replaced by a government of (ostensible) national reconciliation. Gaddafi’s situation in Libya was similar but would entail outright armed rebellion in Uzbekistan, triggered by umpteenth abuses by local officials and police, breaking out in the politically disenfranchised Ferghana or Urgench regions, and soon consuming the country. The fate of the revolt in Libya hinged upon the controversial NATO intervention however, and NATO may not get as directly involved in Uzbekistan. Although Uzbekistan borders NATO-occupied Afghanistan and has a NATO supply route running through its territory, Russia considers Uzbekistan part of its direct backyard and would feel provoked by a Western military intervention. The furthest NATO might go would be to airlift humanitarian aid into the country, but even that could risk Russian accusations of weapons- or intelligence-smuggling. It is also doubtful that the region's NATO equivalent, the Shanghai Cooperation Organization(SCO), would intervene, especially when Uzbekistan is a member-state. We have previously seen Russia turn down a request by the Kyrgyz government to militarily intervene during the ethnic riots in Osh and Jalalabad last year, which suggests that bad memories from earlier interventions into Muslim lands may still be vivid. Solutions to both these situations would have to be homegrown, not only for legitimacy's sake but also because the major powers would simply not know how to proceed.

Which of these is more likely? At the moment, we are doubtful with respect to the prospects of a Gaddafi or Assad scenario for one historical reason: the Karimov regime has already defeated one significant urban revolt. On 13 May 2005, the army violently put down an uprising in the Ferghana Valley city of Andijan, almost certainly on the orders of the government. This act resulted in the deaths of 300-500 people, mostly civilians, according to the Organisation for Security and Cooperation in Europe (OSCE), and doubtlessly the Karimov regime has no compunctions repeating Andijan across the entire country if necessary.

Now, it is true that the Libyan and Syrian cities of Benghazi and Hama had also been violently repressed by the Gaddafi and Assad regimes prior to 2011, only to then become seemingly unpluggable volcanoes of revolution. Consequently, we do not want to say that a successful violent uprising from an Uzbek city is impossible. In fact, the memory of Andijan is quite alive among the Uzbek grassroots; indeed, it blew up the illusion that Karimov himself is not as ruthless as his cronies and satraps, a myth that had quite some currency among the grassroots for many years before. Moreover, in the view of Sarah Kendzior, a blogger with Registan.net, one of Central Asia's leading analysis websites, “Whereas previously state violence took place away from the public eye – in prisons, in interrogation rooms, in the constant, quiet surveillance of the security services – the Andijan massacre was an open act of bloodshed that made it clear that the government would go to any length to suppress dissent.”

It is also hard though to see Karimov, who is not a soldier and mercurial visionary as Gaddafi was, but a Soviet apparatchik who is extremely apt at identifying and surviving byzantine intrigues, go underground and try to launch a guerrilla war sided by his daughters. Even towards the end, Gaddafi still had some sort of tribal base, loyal security units and partisans ready to fight for him – quite to the outside world's surprise, we might add – which was what allowed him to hold on for about eight months after the start of the uprising. The structure and character of power in Uzbekistan, which is manipulative and divisive to say the least (and which we shall review in the next part of this series), leads us to question the real extent of Karimov's support base among the conscripts and lower echelons of his own armed forces.

Nevertheless, Karimov has a control over his subjects that is as about tight as what Gaddafi once had. Consider: Uzbekistan is widely condemned for brutal authoritarianism. In its 2011 Nations in Transit Report, Freedom House flunked the country with an average “democracy score” of 6.93 (on a scale of 1 to 7, with 1 signifying highest level of democratic progress and 7 the lowest). The government has kicked out most foreign non-governmental organizations and its intelligence services have converted the mahalla, a traditional informal neighborhood network that had a complex role in Soviet-era Uzbek society, into a formal committee that on the one hand provides several important and perfectly normal social services but on the other hand acts as surveillance tool on the population. To give you an idea of the sheer scale of surveillance: according to GlobalSecurity.org, there are an estimated 12,000 mahallas in operation throughout the country, the majority of which are probably concentrated in high density urban areas, true, but this should suffice to show that any revolt is going to have find a way to either enlist or liquidate the mahallas.

So, is a Berdimuhammedov or Ceauşescu scenario more likely? We think so, but not verbatim. In fact, we lean toward the possibility of a Ceauşescu redux, but with a strong caveat: it may not be what it seems, i.e., a popular revolt. We explain why in the next part of this series.