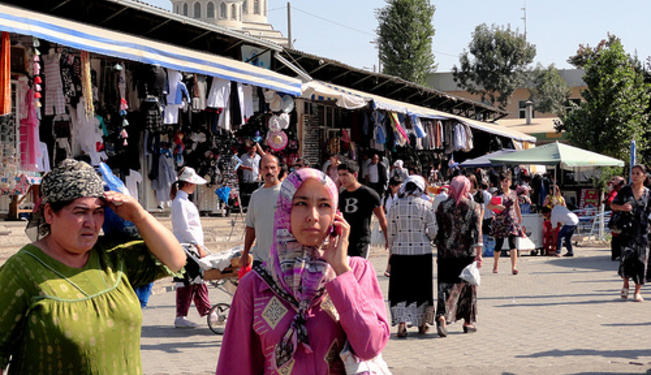 Perspectives and scenarios for regime transition in Uzbekistan.

* The Arabic: طاغوت(taghut) means to “cross the limits, overstep boundaries” or “to rebel” vis-à-vis divine authority. Traditionally a term connoting idolatry, it is mentioned in the politically significant Qur'anic verse 4:76. During the medieval period, it has was used by Muslims to describe the rampaging Mongol khans and their vassals. Today, in contemporary Islamic political theory, it has come to be used to describe dictatorships, i.e., as violating the will of God.

Although it can take some more years, eventually it's only a matter of time before Uzbekistan's ruthless authoritarian leader, Islam Karimov, dies from old age. In a three-part analysis series, Ghent University's Dr. Bruno De Cordier and NewEurasia.net's Christopher Schwartz examine whether indeed all hell could break loose when he finally does, and whether the Karimov regime's choices, both now and in the future, shall place their country on a direct path to Islamicization.

In the first part of this series, we reviewed several possible scenarios for the fate of Uzbekistan during and after Islam Karimov's death derived from the experiences of other strongmen dictators. We concluded that Karimov and/or his regime could go the way of Romania's Nicolae Ceauşescu, but we also advised that the resemblance would only be skin-deep. To understand why, we first need to explain the nature and character of power in Uzbekistan today.

Karimov owes his position to what proved to be fateful decisions on the part of the Soviet Union's central planners. From their perspective, the Uzbek Soviet Socialist Republic (SSR) was the beginning of Central Asia (the relationship between the Kazakh SSR and the Soviet center was somewhat similar to that of French Algeria and the métropole), and as such, the region's keystone republic. The Uzbek capital, Tashkent, was thus made the site of both a major military installation, various industries, and the Soviet muftiyya (Muslim religious administration). However, they also took steps to ensure the Uzbek SSR's dependence upon the larger Soviet framework, such as drawing its borders in such a fashion as to place sizable chunks of the ethnic Uzbek population all the neighboring SSRs, as well as to divide up the irrigation system that was so vital to the country's cotton production, the key industry even back then. The central planners also manipulated the ruling elite, finding a way to effectively split them into two rival micro-regional networks centered around Tashkent-Ferghana and Samarkand-Jizzak. Traditionally, the Tashkent-Ferghana network was the favored of the two, but then in the eighties, in an attempt to realign social networks that had become too autonomous from the Russian center, they maneuvered the Samarkand-Jizzak network into power in the form of a then-young apparatchik – Karimov.

Ever since taking power, Karimov has worked hard to keep the two networks at odds with each other, and he has become quite adept at it: relatively frequent cabinet reshufflings and partitioning and re-partitioning the country's military, security, and police forces between them kept the two networks on their toes – perhaps dangerously so. Strings of explosions in 1999 and 2004 may have been a power-play between the micro-regional blocs and networks. Karimov has also concentrated wealth and influence into the hands of his immediate family, quietly sapping mammon from the old networks, thereby changing the character of power from the micro-regionalist structure of the Soviet era into one based upon personal relations with the presidency.

Were this not unsavory enough, Karimov appears to have reached out to criminal elements on the periphery of the established networks: according to a United States diplomatic cable published via WikiLeaks, there are “close connections between organised crime and the government of Uzbekistan” and that both public and private sector jobs are routinely “bought” (although we should note that the phrase “organized crime” should be treated loosely here, since it could implicate the established networks, as well). Even small ethnic minorities, such as the Koreans who had had been exiled to the Uzbek SSR duringthe ancien régime, have been co-opted: two of the twelve security officials temporarily declared persona non grata in the European Union after the Andijan massacre, for example, were ethnic Koreans, and Uzbekistan's ambassador to Seoul, who has facilitated business ties between the Karimov regime and South Korean companies, is also an ethnic Korean.

Now returning to the question of Karimov's successors, to the outside world, the two most likely candidates are his daughters. You've probably heard of them: Gulnara, also known as “Googoosha”, a pop singer who organized an arts festival in Tashkent last year during which Western chart-topper Sting performed, reportedly for 1 million USD; and Lola, an aspiring philanthropist who in 2009 held a now-notorious gala event at Paris' Museum of Modern Art that rented the services of super-model Monica Bellucci and plenty of other beau monde like French actor Alain Delon, textile entrepreneur and brother of the French president Guillaume Sarkozy, and the former French first lady Bernadette Chirac. Both women already occupy fairly high level official positions with the government: Gulnara serves as a deputy foreign minister and as head of Uzbekistan's mission to the United Nations in Switzerland, while Lola is her country's permanent representative to UNESCO.

Internally, however, handing power to another Karimov is not such a clear option. For one, our suspicion is that Karimov is playing his cards very close to his chest in terms of his succession, so that whatever he may be indicating or promising to this or that person, including his own flesh and blood, it is all part of the poker game (indeed, we would not be surprised if Karimov actually has no solid plan at all, for if one studies his political career very closely, he appears to be more a gifted survivor than a visionary). For another, it is doubtful whether his daughters really possess the cunning, much less political capital, to actually be taken seriously by the rest of the regime's players. Indeed, at least one of them, Gulnara, is said to be, according to another WikiLeaks cable, the single most hated person in the country at the grassroots level – and most likely throughout the political system, too.

So, there are two possibilities: either the daughters are shown the door – and perhaps the way in which they have been amassing real estate and business properties in Europe could be interpreted as preparation for a rather glamorous exile – and replaced by a hitherto unknown or low-profile individual, or one of them is erected as figurehead and the other's acquiescence is somehow bought. We suspect the daughters' more or less gentle exit is the most likely of the two options, but either way, a kind of shadow junta, most likely predominated from the security services, would be really calling the shots. That seems to be the case in Turkmenistan at the moment, wherein a triumvirate of presidential advisors, Viktor Khramov, Vladimir Umnov, and Alexander Zhadan, appear to have in various respects more power than the president himself.

Those of our readers who are familiar with Uzbekistan might notice that we are not anticipating areturn of an historical opposition-in-exile around personalities like Muhammad Salihand Abdurahim Pulat. Although very active outside the country, their movements are fragmented and have been absent from the grassroots in Uzbekistan for far too long to still have a serious base in the country. We cannot over-stress the importance of that. And again, we do think that a dynastic succession by one of Karimov's daughters is less likely. Not that it is out of the question, though. It has happened in Azerbaijan with Ilham Aliev. He, however, capitalized upon the aura of his father Heydar, an erstwhile Soviet KGB mogul and politburo member (one of the few Soviet Muslims to go that far) whose rule, at least initially, came as a relief after a years of internal turmoil and the disastrous war with Armenia in Nagorno-Karabakh. Simply put, Karimov does not have that kind aura, not even among the elites. Whoever is installed upon the Uzbek throne, they are more likely to come from “the system”.

That leads us to our real concern: recall that in the first part of this series, we warned that any seeming repeat of Ceauşescu will be in appearances only. That is because, in our view, there is likely to be a lot of skirmishing between the various factions that constitute the Uzbek political structure, out in the open, in the streets of the cities. Even apparently popular demonstrations should be viewed skeptically, as the world should have done back in 2005 with Bakiyev's revolution. We also anticipate rounds of score-settling in the streets of several towns and cities, and indeed, the much-dreaded and detested hokims (province governors and district prefects), police and security officers, and some minorities perceived to have been favored by the regime (e.g., Koreans) could get the full blow of popular wrath.

When the dust settles, what then? Whether any real structural change, much less a just change, shall ensue, is very uncertain. Much depends upon both the successor's personality and the interests behind him (or her). Again, the Turkmenistan example could be instructive: Berdimuhammedov is not entirely powerless, as he has been both changing the demographic face of the Turkmen bureaucracy and, in a decision that may prove fateful, overseeing the expansion of the Internet into the country. The successor could also attempt to make linkages with Uzbekistan's still-incipient but percolating Islamist movement in order to gain leverage vis-à-vis the junta. That would represent a major change from the rigid antipathy currently exhibited by the regime toward almost all forms of Islamic religiosity and political activism, but that does not mean that some of the Islamists would not take the bait. However, in the long-term this could prove to be a turning point for Uzbekistan's social and ideological development, and it is to this question we turn in the concluding part of this series.The views expressed in this article are the authors' own and do not necessarily reflect Fair Observer’s editorial policy.