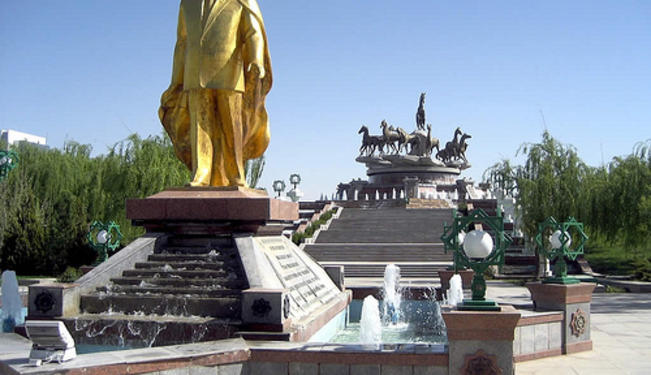 Commentary on the recent elections held in Turkmenistan, and what this bodes for the country’s political future.

Elections in Turkmenistan are quick affairs. While the eve of the 2012 presidential consultations in the Central Asian republic was characterised by a low-key campaign, life reverted to its normal pace immediately after the vote that saw the (re)-election of Gurbanguly M. Berdymuhamedov to the Presidency. It was only on the voting day (Sunday 12 February) that the festive atmosphere auspicated by the regime came to the fore, with traditional Turkmen music providing a lively background to the voting procedure.

The Turkmenistani population has nevertheless little to celebrate after the election, which granted the incumbent president a second five-year mandate. The grip of the regime over the Turkmenistani socio-political landscape does not seem to relent, and Berdymuhamedov’s power over the elite is now unchallenged. In late 2006, the current Turkmenistani President was a relatively unknown member of the elite, backing long-term dictator Saparmurat A. Niyazov. After Niyazov’s sudden death, Berdymuhamedov had to rely upon the support of a relatively restricted group of top-level cadres (mostly those in charge of the so-called power Ministries and the country’s armed forces) to emerge as the victor of the ensuing power struggle set into motion. . His election in the first multicandidate vote held in post-Soviet Turkmenistan (February 2007) was hence the outcome of elite plotting, rather than the expression of popular will. During his first mandate in charge, the newly elected president devoted considerable energies to purge the Turkmenistani elite of members that could pose a challenge to his power. This might explain the number of high-profile dismissals that have characterised the last 2-3 years of Turkmenistani political life. Interestingly, high turnover rate at cabinet level was a most peculiar feature in the modus operandi of the Niyazov regime as well.

In 2012, the scenario was completely different. Turkmenistani politics is currently undergoing a rapid process of (re-)personalisation, as further testified by the progressive emergence of a cult surrounding the President’s personality, whose latest elements include a number of presidential escapades on the Turkmenistani pop music scene and the propagated glorification of Berdymuhamedov’s immediate family, and particularly his father and grandfather. Berdymuhamedov is also strengthening his monopolistic control over the lucrative gas industry, whose revenues account for the bulk of the Turkmenistani budget. If we consider that the separation of powers, within Turkmenistan, is treated as a constitutional formality, it can be concluded that President Berdymuhamedov is gathering absolute power in his own hands, following in the steps of his mercurial predecessor.

The surreal circumstances in which the 2012 campaign was held and the striking result of the vote itself seem to suggest that the election was nothing more than an opportunity for the regime to showcase Berdymuhamedov’s power. To my mind, two key elements are more helpful than others in highlighting the essentially fictional nature of the Turkmenistani presidential election.

To begin with, the multicandidate nature of the election was to all intents and purposes cosmetic. The seven candidates ‘selected’ by the regime to run against the president were minor players in the domestic political arena – unable, in other words, to pose a serious threat to Berdymuhamedov. Their selection was not accidental, and a look at their profiles reveals a deliberate plan to establish a seemingly inclusive field. They were carefully selected to represent not only Turkmenistan’s geographic diversity (the field included candidates from the five provinces) but also mirrored the country’s economic complexity (four candidates were directly involved in the country’s energy industry, including the Minster of Power and Industry, while two others held positions within Turkmenistan’s agricultural sector). At the same time, these candidates, during their campaign, illustrated relevant sections of the president’s political program to the wider population. This practice, already implemented in 2007, confirms the subordinate nature of the ‘minor’ candidates, and, ultimately, their complete adherence to the regime’s outlook.

Second, regime behaviour during the campaign unabashedly favoured Berdymuhamedov. The minor candidates indeed campaigned in the five provinces, but their electoral meetings were never open to the wider public. The visibility of the minor candidates was also constrained by the regime’s use of media, which restricted the attention of the main television channels to the incumbent president. At the same time, there were no televised debates amongst the eight presidential candidates.

The Turkmenistani population quickly picked up on the window-dressing essence of the election and went to the polls knowing that they had no real alternative beyond Gurbanguly Berdymuhamedov. Analogous conclusions were reached by the international community, which opted not to monitor the election. The Commonwealth of Independent States (CIS), in stark contrast to its Western counterparts, did indeed envoy a monitoring mission to Turkmenistan. CIS observers, in a bizarre twist, declared the Turkmenistani election to be ‘free and fair’ three days before the ballots were actually opened.

Popular disillusion with the range of candidates – and the electoral violations perpetrated by the regime – contributed to the landslide that accompanied Berdymuhamedov’s re-election: the President obtained a remarkable 97% of valid votes – a result which is all the more striking if we consider that the official figures reported a turnover of 96% over Turkmenistan’s 3 million strong electorate.

With regard to the election’s impact on the future of Turkmenistan, it may be said that the regime’s suffocating control of the domestic political landscape severely constrains prospects for reform. Paradoxically, the mere staging of the election – a practice that Turkmenistan abandoned during the Niyazov era – will feed into Berdymuhamedov’s rhetoric on political liberalisation. The regime will continue to boast of its commitment to political reform, in spite of its blatant violations of international democratic standards. In this regard, it might be worth remarking that Berdymuhamedov himself, in the months preceding the 2012 election, announced the creation of a multiparty system within Turkmenistan and invited the opposition-in-exile to participate in the vote. A cursory look at the candidate list described above suggests that the regime quickly abandoned these promises.

Personalisation of power, oppressive authoritarianism, cult of the leader’s personality and empty rhetoric on democracy characterise Turkmenistan in 2012 just as they did during the Niyazov years. The continuity in the regimes’ outlook and governance methods is striking: the 2012 election confirmed, if anything, that the Berdymuhamedov years are not going to be very different from the Niyazov era.