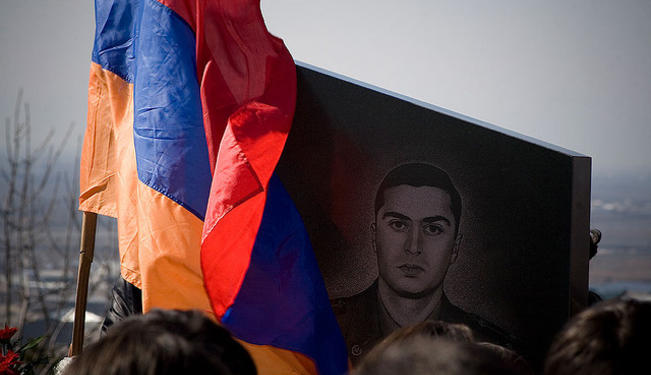 Azerbaijan has pardoned an Azeri who murdered an Armenian officer. Post-war, government produced hatred against Armenians expands in Azerbaijan where the assassinator becomes a national hero.

In August 2012, the convicted Azeri axe- murderer Ramil Safarov was transferred from Hungary to Azerbaijan. Despite Baku’s assurances of enforcing Safarov’s sentence, he immediately was pardoned upon his arrival. In 2004 senior lieutenant Safarov was participating in a NATO English course in Budapest and hacked an Armenian lieutenant Gurgen Margaryan with an axe to death while Margaryan was asleep. Safarov was jailed and sentenced to life imprisonment in Budapest in 2006.

It didn’t take long for the Azerbaijani government to support Safarov’s deed simply because he murdered an Armenian officer. He was rewarded and in return for his heroic action was freed, promoted to Major, granted an apartment in Baku, received a back pay for all eight and half years spent in jail in Budapest and was declared as a national hero.

Shortly after President Ilham Aliyev pardoned Ramil Safarov Armenia cut diplomatic relations with Hungary over Safarov’s affair. The Armenians in Armenia and across the world have protested against Safarov’s release condemning the Hungarian government’s decision and calling for justice.  European and American authorities sharply condemned Aliyev’s decision to pardon the murder and demanded a valid explanation from the Hungarian Government for the extradition.

The prime minster of Hungary Viktor Orban and the president of Azerbaijan Ilham Aliyev both claimed that the Hungarian government made a ‘’correct and right’’ decision in compliance with the rules of international law;  Hungary’s legal practice and Azerbaijan’s legislation.

Safarov’s extradition was a good exchange with energy-rich Azerbaijan which allegedly bought out Hungarian loans worth $2-3 Billion Euros.  The beneficial deal approved by the Hungarian Prime Minister Viktor Orban and the president of Azerbaijan, Ilham Aliyev was not so popular among Hungarian people. Thousands of Hungarians marched on the streets in the capital city of Budapest to show their disapproval and concern over Safarov’s release chanting anti Orban slogans and criticizing his administration.

The pardon shocked the international community. In Azerbaijan the picture was just the opposite: it was a long-waited day of national celebration. The barbaric murderer was met and praised like a hero. Azerbaijan with its poor records of human rights didn’t choose the right path to promote the country’s image at international level. Understandably, each war results in increasing bilateral tensions and mutual hatred between nations. However, the means to foster hatred against Armenians have reached the top in Azerbaijan. Nationalism is set on daily agenda in this country. The hate based strategy operates efficiently and Safarov’s case is yet another manifestation of it. After all, it is an official policy in Azerbaijan that people with Armenian last names regardless of their citizenship are denied entry to Azerbaijan as a state policy. No Armenian is allowed to enter Azerbaijan.

In the capital city of Baku where thousands of Armenians used to live before the violent war culminations still the abandoned Armenian church stands, locked and without the dome cross. The cross was removed from the dome by the Azerbaijani authorities and the church became state property. Nothing is shared between Armenians and Azerbaijanis not even sports: some years ago Azerbaijan denied entry of Armenian soccer team with the pretext that ‘’Armenian national anthem should not be played on Azerbaijani soil’’.

Recently, the President of Azerbaijan announced that the world Armenians are Azerbaijan’s enemies and that current Armenian Republic lies on ‘’Azeri soil’’.  The fact that history order and geography is taught and presented differently in Azerbaijan is not news but perhaps some serious scientific books and ancient world maps should be considered while educating a whole nation, an entire country, Azerbaijan which only appeared on the World map in 1918. The country’s first face, President Ilham Aliyev should be accurate and deliberate while addressing his speech to his nation: hate speech and imaginary history will only delude and lead Azerbaijani nation to deadlock.

Towards pending road of peace

Armenia and Azerbaijan fought a bloody war over historically Armenian territory of Nagorno-Karabakh (Artsakh). Stalin’s plan to detach this territory from Armenian Soviet Socialist Republic and unify it with Azerbaijani Soviet Socialist Republic aimed at advancing respective relations with Azerbaijan’s ethnically related powerful neighbor, Turkey.  The war broke out between two USSR members, Armenian SSR and Azerbaijani SSR, when the parliament of Nagorno Karabakh Autonomous Oblast (NKAO) voted in favor of reintegrating Nagorno-Karabakh back into Armenian SSR. This caused severe inter-ethnic clashes between Armenians and Azerbaijanis and the undeclared war started in 1988 which gained a new impetus after the fall of Soviet Union. The ceasefire was signed by both sides only after 6 years in 1994.  Presently, de-facto Nagorno-Karabakh Republic is under care of Republic of Armenia.

Little progress has been made on peace building process as there is no room left for mutual understanding and cooperation. All the international proposals of ‘’Confidence Building’’ UN program have been turned down by the Azerbaijani side. More importantly Azerbaijan has rejected withdrawal of snipers from frontlines. Finally, it refused to participate and provide its assistance in investigating border incidents.

The unresolved Nagorno Karabakh conflict is a sensitive one and the international community is in favor of giving peaceful solution to the land disputes between Armenia and Azerbaijan as it bears a crucial geopolitical significance: this territory is an anchor for precious resources, strategic oil and gas pipelines and a hot zone of periodic ceasefire violations which can change the course of security dynamics and trigger regional instability with the possibility of engaging other ally actors such as Russia, Iran and Israel.

With this step of spreading hatred and xenophobia against Armenians the Azerbaijani government shows that Azerbaijan is not ready for further peace talks but quite the reverse it is only interested in promoting ethnic hostility and calling for warfare in the region. Promoting hate and brutality against a particular nation happened to be one of the political tools utilized by Aliyev’s authoritarian regime to take away Azerbaijani people’s attention off domestic affairs and politics. Twenty one years gone by since Nagorno Karabakh declared it's independence from Azerbaijan. Distorted media news, controlled by the government that constantly spreads anti-Armenian propaganda undoubtedly generates anger and frustration among Azerbaijanis, thus helping the government conceal its imperfections and blame Armenians for their country’s poor socio-economic conditions, although oil-rich Azerbaijan could have offered far better life for its citizens.

The brutal axe-killer’s extradition and pardon will not assist in peace building process between two neighboring countries, Armenia and Azerbaijan; it will not only limit the possibilities of peace dialogue but also might raise the risk of a new war after the ceasefire of 1994.