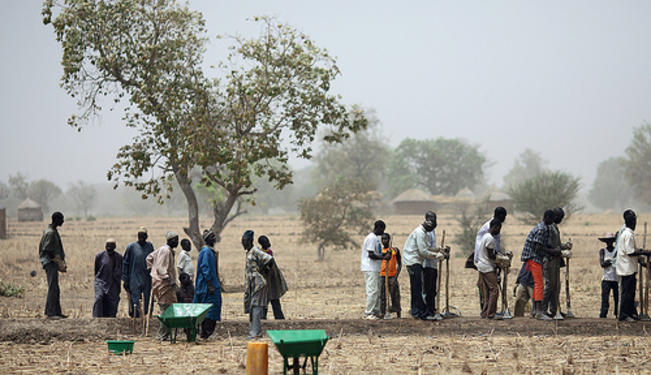 Following another food crisis in the Western Sahel, is there hope of a new policy direction tackling the causes as well as symptoms of food insecurity?

The Western Sahel region is facing its third humanitarian crisis in less than a decade and it seems that the cycle of famine in the area is set to continue.

This year, millions of dollars will be spent on alleviating the immediate symptoms of the crisis and on returning rates of malnutrition to acceptable levels. But once again, a focus on the underlying causes of famine seems unlikely.

Currently, 10mn people in the Sahel are targeted for emergency assistance. In 2010, a near identical number of people required help, and in 2005, a crisis affecting mainly Niger, left approximately 3mn people threatened by extreme food insecurity.

However, unlike two years ago, the contributing factors to the current crisis, including the widespread loss of livestock and a sharp decline in cereal production, were forewarned.

Reliant on rain-fed agriculture and with no backup form of irrigation, farmers in the Sahel are particularly vulnerable to periods of low food production. Households are particularly prone to food shortages during the lean season as stocks decline before the harvest approaches.

In the context of famine, where consumption deficits are sustained, malnutrition becomes entrenched and households experience extreme levels of food insecurity.

In response to previous crises, overstretched and uncoordinated aid efforts were unable to meet the severe demand.

Several aid organisations targeted only the most severe cases of undernourishment and typically focused on short-term measures to ease food distribution rather than strengthening the capacity of households to deal with the root causes of famine – namely, low crop productivity and the vulnerability of fragile food systems to climate shocks.

Furthermore, aid is often difficult to secure. In 2010, Oxfam reported that aid provided was severely insufficient to deal with the crisis or meet large-scale post-emergency needs. The organisation claimed that donor pledges covered only one third of the total aid required.

Current responses follow this recurrent theme. In February 2012, urgent calls were made for united action in the Sahel at a high level meeting in Rome by the UN Food and Agriculture Organization, IFAD and WFP, joined by USAID and the European Commission.

Despite consensus being reached on the urgency for humanitarian action, the actions necessary to deliver resilience to smallholder farmers were barely defined. And, more importantly, the gap between funding pledged and that amounts necessarily to combine emergency relief with long-term development has been striking.

International support for long-term strategic investment in agriculture, regarded as critical if repetitive food crises are to be averted, have long been muted by short-term efforts focusing on the disbursement of food aid and elementary measures to mitigate chronic food insecurity.

The food crisis in the Sahel has exposed the frailties of this present system, and rising food prices have dramatically increased the proportion of income that the poorest households in the region had to spend on food.

While development agencies can play a critical role in achieving transition from post-emergency to sustainable development by improving early warning systems and extending service support to farmers, interventions have been typically underfunded and understaffed with little potential to build local capacity.

Government support for unfettered liberalisation has inevitably waned as the number of vulnerable households affected by long term food insecurity has peaked without strategic safety nets to protect them. Meanwhile, risks to political stability and the possibility of social unrest pose threats to national development.

Building resilient food systems in the Sahel is likely to require a scale-up approach, moving away from a focus on individual projects or flash appeals and moving towards the establishment of national and regional programmes. This will need to be sustained by ongoing funding from government, regional institutions, and development banks.

Within the region, popular measures to address cyclical food crises have centred on investments in rural infrastructure with a focus on enhancing food supply. Improving techniques to limit post-harvest losses and build up strategic food reserves provides a safety net for vulnerable households.

Indeed, grain reserves have already been successfully implemented in countries such as Mali and Ethiopia which has reduced the impact of variable rainfall and low crop production on food security.

The role of regional institutions has been paramount to regional food security interventions, especially in areas where donors have been hesitant to provide funding.

An initiative led by the Economic Community of West African States (ECOWAS), points to a new policy direction in addressing ways to break predictable cycles of famine. ECOWAS plans to implement a regional food reserve with built-in capacity to effectively respond to chronic food insecurity as part of a series of instruments used to regulate agricultural markets. This reserve is designed to complement national measures, acting as a ‘third line of defence’.

Following priority action within those areas defined within the ECOWAS agricultural policy, the food reserve aims to support the establishment of social safety nets while ensuring regional market integration. Implementation of the reserve is scheduled for later this year.

The establishment of regional instruments to safeguard food access may not mean the end of famine in the Sahel. The move, however, reflects growing internal political recognition of food insecurity as more than a humanitarian event, but as an issue of national and regional development.

By moving away from the laissez-faire doctrine, direct intervention in securing food supply represents a substantial policy shift for the West African sub-region, marking perhaps the beginning of an era of African food sovereignty.

*[This article was originally published by Think Africa Press on March 29, 2012.]