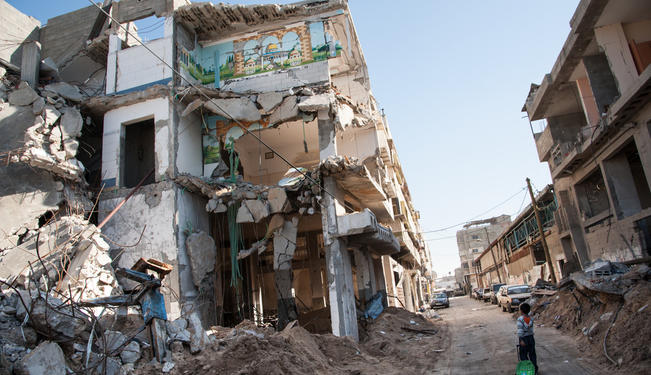 Over the past five years, humanitarian health workers Peter Smith and Catherine Thick have visited the Gaza Strip and the West Bank numerous times, providing health clinics and witnessing the everyday lives of the local population. The suffering they have seen in Gaza has prompted them to share their experiences, and call for a just and equitable peace between Israel and Palestine. This is the last of a two part series. Read part 1 here.

Medical Inadequacies and the Lost Generation

In 2010, we visited Al-Shifa Hospital. It had holes in the walls, no windows, old and broken-down equipment and few sufficiently trained surgeons. An exhausted doctor there remarked: “Additional expertise, hospital beds and staff will be needed in the coming years to serve a growing population. While some of our health indicators are comparable to middle-income countries, quality needs to be improved. Most of our health facilities are unable to provide safe and adequate services and urgently need to be rehabilitated or upgraded. The infant mortality rate here is 23 per 1000 live births, comparable to Nicaragua. Many of the children brought to us [have] permanent afflictions caused by hypoxia or other birth traumas which the hospitals cannot deal with.”

Although Israeli authorities permit the entry of medical supplies to Gaza, there is a shortage of replacement parts for medical equipment, which frequently break down, and a lack of people with the training to make the repairs. The doctor described the consequences: “Severely ill patients need to be transferred to hospitals in Israel, the West Bank or Jordan. There can be endless delays with applications for transfer, which costs lives.”

While in Gaza, we typically stayed in an apartment building mostly occupied by members of foreign non-governmental organizations (NGOs). They spoke more freely than some of the patients. An educational trainer told us: “Life is further complicated as Gaza is becoming increasingly radicalised under Hamas, [which] restrict[s] civil liberties, press freedom and the rights of women. The blockade and internal repression have political, developmental and cultural consequences which benefit fundamentalist forces because people are resorting to religious thinking and behaviour, abandoning intellect and creativity.” She concluded sadly: “The children who are old enough to be aware of their situation can become withdrawn, aggressive or radicalised. So [it’s] another lost generation.”

Witnesses to the Suffering

Two years ago, Ibrahim, who helps us arrange the clinics, took us to a village that had suffered heavy shelling and many casualties. Families were living in tents next to their bombed-out homes. We held back because we wanted to take photographs but felt uncomfortable doing so. However, Ibrahim beckoned us forward and explained that the villagers wanted us to witness how they were forced to live. They welcomed us.

Ibrahim looked almost ashamed. “The people of Gaza are denied basic human rights, and everyday life is filled with hardship,” he said. “Medical supplies, all services, many foods except for the basics, civil rights and liberty are harshly restricted, regulated and enforced by the Israeli authorities. Gaza is forced to buy and import food from Israel as it does not have the means now to produce enough locally.”

Clearly angry, Ibrahim continued: “Although Gaza, unlike the West Bank, is no longer occupied, it has become, in effect, a huge prison. When Israeli [Prime Minister Ariel] Sharon became convinced that the Gaza Strip was no longer worthwhile, he abandoned it and closed its residents within an enormous ghetto with no opportunity for self-sufficiency.” He concluded: “Even more worrying, society is fracturing, [and] traditional community life and values are being destroyed.”

After leaving the village, we walked with Ibrahim through the crowded and noisy streets of Gaza City. He explained that the power station in Gaza runs on petrol imported from Israel and Egypt. To make matters worse, the power station was heavily damaged by shelling, and a third of the facility is still out of action because the Israeli government rarely allows any spare parts or building materials into Gaza.

As a result, there are power cuts during which homes, shops, hospitals and offices are forced to resort to petrol-driven generators, which are expensive, dirty and unreliable. Ibrahim remarked: “The noise and smell of all the generators hits us when walking down these streets, and it is a constant and depressing reminder of our situation.”

Another, more serious, effect of the power cuts is that local water purification plants do not have enough electricity to run, so most of the water in Gaza is unsafe to drink. “It is hard sometimes not to feel that the endless chaos the blockade causes is a calculated control tactic and a form of spiteful, collective mass punishment,” Ibrahim commented. He is right. Denying millions of Palestinians the right to travel to and from Gaza is collective punishment and is illegal under international law.

After Ibrahim invited us to his home for dinner, exhibiting a hospitality that we have experienced many times on our visits, we returned to our apartment building, where we passed by the bright lights of a film crew and an obviously agitated mass of people talking and shouting. We did not stop to ask what was happening, but we soon received a phone call from Ibrahim explaining that an Italian peace activist had been kidnapped and murdered by an extremist Salafist group. Ibrahim insisted that we do not to leave our apartment unescorted.

We sat on the balcony into the early hours of the morning with a United Nations Development Programme (UNDP) worker, discussing the “tunnel industry” in Gaza. He explained that since supplies are restricted, a lot of goods, especially construction materials and cheap fuel, are smuggled in through hundreds of tunnels dug along the border with Egypt. This distorts the economy. The smuggling has supported a modest construction boom in Gaza, employing thousands of people. In addition, a large percentage of the goods that stock Gazan shelves, everything from food and medicine to cement and iron, have come through the tunnels.

Though the tunnel industry has contracted since Israel began allowing more goods through the crossing in 2010, Gazans say they still need the passageways to supplement what the Israelis do not permit to cross, making the tunnels necessary for their daily survival. According to Human Rights Watch, Israeli and Egyptian policies toward the Gaza Strip have impeded economic recovery by banning nearly all exports.

The UNDP representative further explained that the challenges confronting the people of Gaza will only intensify over the coming years. With a ballooning population, it will become all but impossible to provide the energy, education, health, water and sanitation necessary for the inhabitants of Gaza to lead healthy and productive lives in peace and security. As a heavily urbanised environment with little room for growth, Gaza needs to be open and accessible to the West Bank and the world, and to be in control of its own airspace and coastline.

It is only in conversations with NGO and aid workers that we could talk about the political tension in Gaza directly. Most of them see the increasing radicalisation of Hamas as a barrier to the formation of a united government with Fatah, undermining the Palestinian Authority’s ability to negotiate for all Palestinians on the international stage. The United States has created an additional barrier by threatening economic sanctions if Fatah and Hamas form a unity government.

The Hamas government has also begun imposing new restrictions on residents of the Gaza Strip, forcing them to apply for exit permits to enter Israel or the West Bank. The Palestinian Center for Human Rights, a Gaza-based watchdog, said in a press release that: “This decision increases the suffering of the already limited groups of people who are permitted to travel via the crossing by the Israeli forces.”

Additionally, the NGO and aid workers explained that the “tunnel economy” is frequently fraught with internal and external political issues. Within Gaza, the tunnels mostly benefit the authorities since Hamas controls many of them and uses them as a source of income. Across the border, Egyptian security forces recently flooded many of these tunnels in an effort to restore order to the beleaguered Sinai Peninsula and quell the flow of contraband, including arms.

The victim mentality has become a political tool in this conflict, and much time has been spent apportioning blame. The Palestinians and Israelis have differing views of the “facts” and of the history and future of the situation. Even more worrying is the international community’s mounting catalogue of failures over the last six decades to commit Israel and Palestine to full equality under international law.

Blame and apologies aside, surely it is time to take a pragmatic approach to break the current impasse in this complex conflict — a festering wound in a region in turmoil. The US, UN, European Union and Arab League have the necessary political, legal and economic tools to break the diplomatic deadlock. Hopefully, President Barack Obama’s visit to the Middle East last month marked the beginning of a renewed international effort.

Visiting Gaza and the West Bank stamps a vivid impression in the heart and mind of the consequences of a major social injustice: oppression and dispossession. While standing on the balcony at Ibrahim’s home looking out over Gaza City with Emy, a university student and our interpreter, we talked about life in Gaza. Emy said quietly: "We barely have enough to survive. We don't want pity; we want our freedom. And this loss of liberty is what we find most difficult to endure."

This is the last of a two part series. Read Part 1 here.