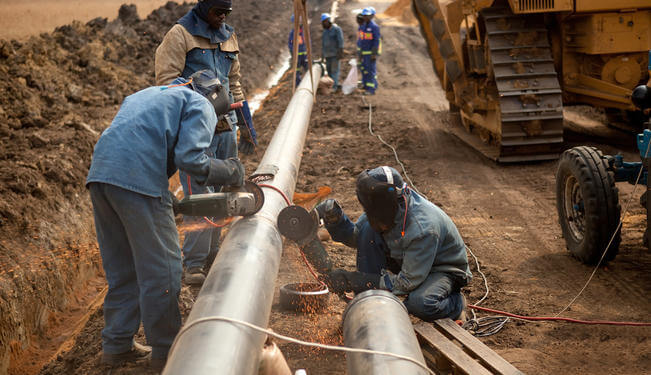 In order to make its current growth sustainable, Africa must rethink its economic focus.

In 2013, a major policy discourse within and between the supranational bodies that influence policymakers in sub-Saharan Africa was the industrialization of the continent. These bodies include, but are not limited to, the African Union (AU), the United Nations Economic Commission for Africa (UNECA), and the United Nations Industrial Development Organization (UNIDO).

Industrialization is defined as: “The process in which a nation or continent transforms itself from a primarily agricultural society into one based on the manufacturing of goods and services.” During the trans-Atlantic slave trade and later the colonial era, Africa supplied raw materials and labor for the industrial development of Europe and North America. This practice continues until today. Much of sub-Saharan Africa still has a high dependence on primary products, exporting much of its raw materials without adding value to them while importing manufactured goods.

The crux of the continent’s development narrative is how to leverage the current economic growth in the region, in addition to other favorable conditions, as a bridge to help facilitate industrial development.

Gross Domestic Product (GDP), the economic indicator, is defined by the World Bank as: “[The] sum of gross value added by all resident producers in the economy plus any product taxes and minus any subsidies not included in the value of the products.” Economic growth is linked to creating value by adding value to a nation’s raw or intermediate materials.

Unfortunately, however, adding value to sub-Saharan Africa’s own natural resources has not been a strength of the continent. In spite of this, the World Bank Africa’s Pulse and the IMF World Economic Outlook (WEO) state that the economies of sub-Saharan Africa have, since the late 1990s to 2013, been experiencing consistent economic expansion. Six of the world’s fastest growing economies are currently within this region. Whereas economic growth slumped for most of the world in recent years, sub-Saharan Africa’s growth has stayed resilient right through the global recession.

The IMF’s World Economic Outlook for October 2013 estimates that 16 countries in sub-Saharan Africa will experience GDP growth greater than or equal to 6%. It forecasts 15 more countries to experience economic growth of 4-6% — meaning 31 out of the total 45 countries analyzed in sub-Saharan Africa are expected to experience economic growth greater than or equal to 4%. This is significant when one considers that the growth of advanced economies in the same period is forecasted to be 1.2%.

The reasons suggested for the economic growth are many. According to Bretton Woods Institutions, much of the growth is a result of increased world commodity prices. The 2013 Africa progress report concurs and enumerates other reasons for the growth such as improved macroeconomic policies, increased investment in infrastructure, institutional development, the deepening of financial systems, and rising productivity.

As recommended by the 2013 Africa Progress report, it is advantageous for African governments to fully implement the Accelerated Industrial Development for Africa (AIDA) plan, signed in 2008 in Addis-Ababa. The AIDA is a comprehensive framework for achieving the industrialization of the continent. If Africa can successfully steward its natural resource wealth, investing it wisely and using some to industrialize, then whether the resources run out or not or whether commodity prices fall, Africa would be on a good economic footing.

Moreover, not only will industrialization create the environment for adding value to Africa’s natural resources, but it will also provide much needed employment at various stages of the value adding chain for Africa’s 1.1 billion people — leading to wealth creation.

Industrialization will address many development gaps in sub-Saharan Africa. Some of these gaps, as noted in a UNECA Southern Africa Office Expert Group Meeting Report, include:

The Time is Now

Is Africa ready? The answer is an emphatic yes. The phenomenal growth is one reason why Africa is ready, but growth on its own is not enough. Other conditions need to be considered: Does the continent have access to enough raw materials for production? What is the proximity of these natural resources to the continent? Is there adequate land, labor, and capital? These are the traditional factors of production or inputs to the production process.

Yes, Africa has access to the raw materials necessary for production. Unlike already industrialized nations who have to import raw materials from Africa and elsewhere over long distances, Africa enjoys close proximity to these resources.

With regards to the factors of production, Africa is the world’s second largest continent and therefore is home to plenty of land — most of which is arable.

Africa is also the world’s second most populous continent. The average age of an African in Africa is under 19 years. This means Africa has enough manpower or labor to industrialize.

Capital refers to man-made products used in the production process such as buildings, machinery and tools. Africa does have a measure of this, but instead needs to do more in this area — hence the need for greater infrastructural and skills development. In fact, African policymakers as well as their counterparts in the developed world should realize that it is high time for a shift in the nature of aid to the continent — from primarily monetary aid to the type of capital aid needed for industrialization.

Finally, when Africa successfully undergoes industrial development, its huge populace will serve as a market for the outputs of its production processes; any excess supply can be exported and swapped for foreign exchange. Africa is ready and the time for it to industrialize is now.