US Secretary of State Mike Pompeo wants everyone to understand that the bombings in Sri Lanka on Easter Sunday provide a justification for the war on terror initiated by George W. Bush, which has become a permanent and dominant feature of US foreign policy. His tone sounded almost thankful for the atrocity when, in its immediate aftermath, he proclaimed that the “vile attacks are a stark reminder of why the United States remains resolved in our fight to defeat terrorism.”

On April 24, he followed up by saying: “Every indication is that this was at the very least inspired by ISIS [Islamic State].”

Suggested by or influenced by in some way, meaning that a cause has been found and action to suppress it is required

In the segment of this CBS News interview that has been released, Pompeo says a number of things that are worth deconstructing or at least wondering about, if not psychoanalyzing.

He tells us, for example, that: “We have Al Qaeda in the Arabian peninsula that still has real capacity to put the United States at risk through its expertise.” Parsing that sentence reveals the following logic. “We” (the subject: the US) have something (the object: al-Qaeda) “in the Arabian peninsula” (the location). This would seem to indicate that Pompeo sees the US as being materially present in or even part of the Arabian Peninsula. In terms of sovereignty, what could that mean?

The next curious turn of phrase is al-Qaeda’s expertise. What al-Qaeda “expertise” is he referring to in the Arabian Peninsula that can put the US “at risk”? As so often in the bellicose rhetoric of Washington, politicians suggest that local events abroad are putting the homeland at risk. But the kind of political risk this evokes is unimaginable. So, the only thing it can mean is that the status of the empire — its control over certain geographical zones — may be put at risk. Which, again, is an admission of empire.

Secretary Pompeo then offers this mysterious proposition: “There are lots of pockets we could walk through.” He appears to be referring to an action to be undertaken with specific nodes in the networks. But how do intelligence analysts “walk through” those pockets? Is it about infiltrating the pockets or possibly disrupting them. The Daily Devil’s Dictionary needs to know more about CIA jargon to make sense of this.

Pompeo’s conclusion is clear: “But this challenge of taking down these networks is something the United States is going to have to continue to stay right on top of.” By “stay on top of” he means “follow through” or possibly “remain in control,” but the expression also conveys the idea that the US sits above everyone else and manages their affairs. That’s how empires operate.

Like everyone else in US politics and media, Secretary Pompeo speaks as if the role of the US in the world is to offer guidance and assistance when necessary against evil. That’s why terrorist incidents have become so valuable and necessary. They justify actions to oppose terrorism that, when taken all together, end up curiously resembling empire.

Former West Point instructor and historian Danny Sjursen reminds readers of Truthdig of the role that all presidents are expected to play, whether, as Republicans, they play it with a threatening scowl or, as Democrats, with a seemingly empathetic smile. He writes: “Obama — just like Clinton, Carter, LBJ, and Truman before him — served as little more than a polite emperor.” Contrasting the Republicans and Democrats who have held the office, he points out that “the foreign policy differentiations were more about manners than substance.” Americans see the difference between the two parties through the prism of their own domestic culture of hard-nosed individualistic meritocracy versus a tender-hearted meritocracy that distinguishes itself by the concern it shows for the downtrodden at home. When it comes to foreign policy, the president has no choice. He must represent the empire and its interests.

One interesting twist to speculate about in Pompeo’s statements is this one: “Even apart from the Sri Lanka incident, it’s absolutely the case that the capacity for ISIS and other radical Islamic terror groups, Sunni terror groups remains.” As President Donald Trump’s foreign policy in the Middle East has been essentially constructed around the alliance with militantly Sunni Saudi Arabia, coupled with an aggressively anti-Iranian Israel, currently enamored with the Saudis’ courage in opposing Shia Iran, it was tempting to think that after announcing the definitive defeat of the Islamic State’s caliphate, the Trump administration would have focused all its energies on defining the Shias, led by Iran, as the enemy.

This would have paved the path forward toward a tripartite alliance of a new alliance of virtue (the US, Israel and Saudi Arabia) against the diabolical Shias. But the empire, to maintain its imperial vocation, requires the persistence of a second front against the Sunnis, even if Saudi Arabia remains the spiritual heart and putative leader of the Sunni umma (community).

Pompeo reveals why this is necessary, as CBS News relates: “Yeah, almost certainly the case that they show no sign of ideologically having waivered [sic] from their desire to conduct attacks on the West. And that means we’re going to have to be vigilant for an awfully long time.”

The US needs a reason to be seen as indispensable in its actions across the globe. The “desire to conduct attacks on the West” ensures that indispensable status. Some might find it peculiar to hear Sri Lanka referred to as “the West”? For Pompeo, nothing could be more natural. Sri Lanka is a province of the empire, just like neighboring India, a nation with four times the population of the United States that has now learned it no longer has the freedom to purchase oil from the most convenient and trusted supplier. 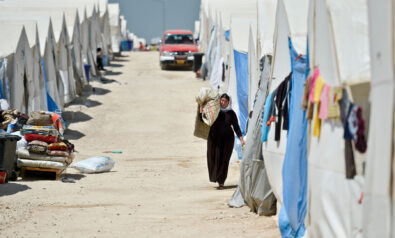