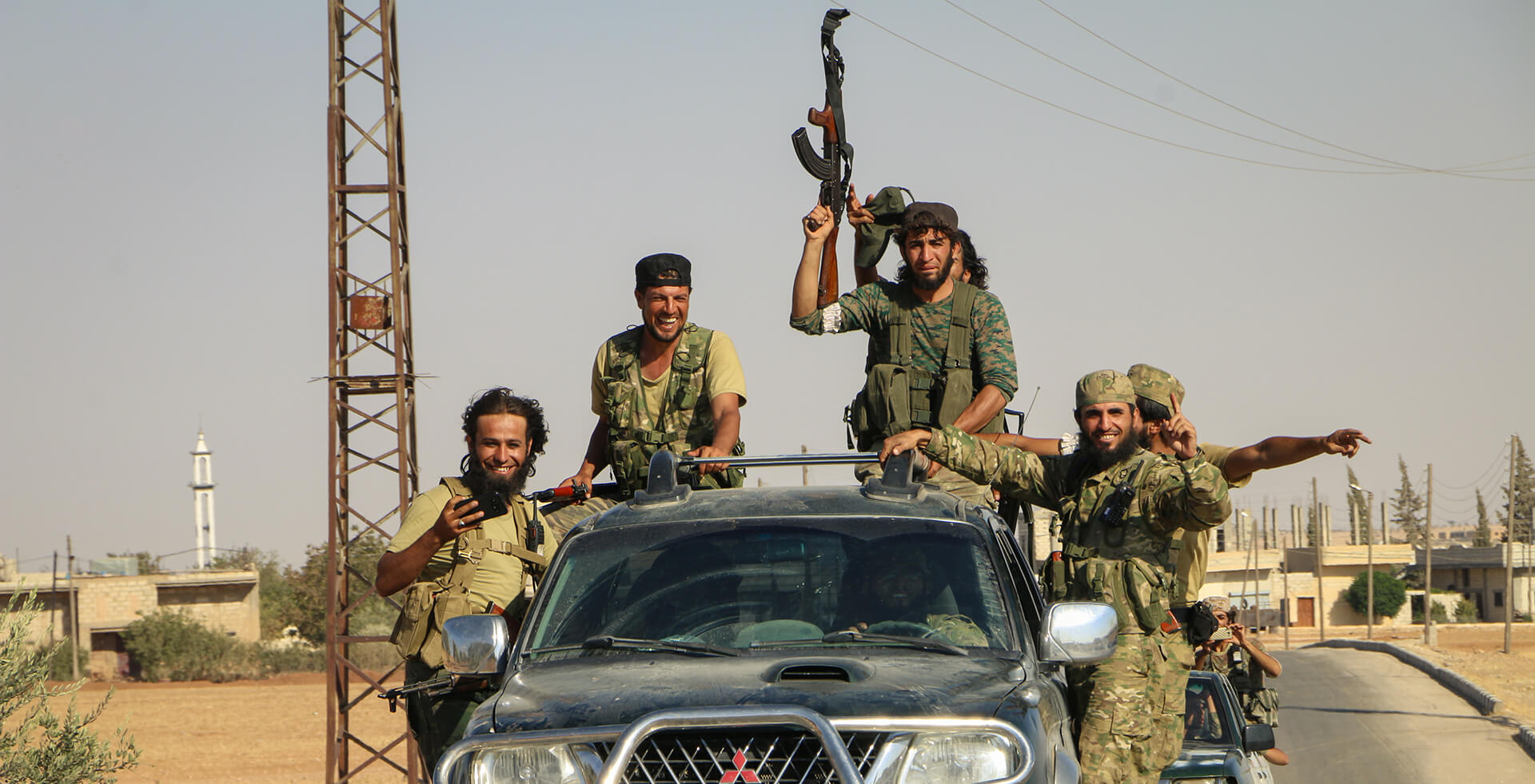 Aleppo, Syria 16 October 2016: Syrian opposition fighters raise their hands of victory over the military vehicles after the victory over ISIS © Mohammad Bash / shutterstock.com

A study released by the International Crisis Group (ICG) on Monday paints a detailed picture of a resurgent ISIS in Syria. The final defeat of the so-called caliphate in 2019 was achieved largely with the Syrian Defense Force (SDF), a mostly Kurdish force backed by the US. The assumption that somehow that meant the end of ISIS in Syria and Iraq was always misplaced. As with Taliban fighters in 2001, ISIS ones melted into the local population who, either because of threats or shared grievances, supported them.  For some, the extremist ideology continues to hold attraction and they form terrain where ISIS continues to flourish.

The ICG report details the apparent ease with which small units of ISIS fighters, in groups of four or five, conduct raids on Syrian troops and SDF forces, conduct assassinations and mete out other forms of punishment on those deemed to have “collaborated” with any enemy. The report also details how ISIS runs lucrative smuggling and extortion rackets. These provide the funds to recruit and pay fighters and to equip them with weapons.

Of Prisons and Prisoners

The report points out the vulnerability of the 27 prisons holding ISIS fighters scattered throughout the northeast of the country as well as the holding camps for women and children, the most notorious of which is al-Hol. There, militant hardline women control much of the camp. The SDF, already stretched, is charged with policing and holding the prisons, the holding camps as well as IDP camps. “Our ticking time bomb” is how a senior SDF commander, citing a lack of personnel and resources, describes al-Hol where 15 murders were committed in the first three months of this year.

The SDF’s vulnerability was on full display in January when ISIS launched a full-scale attack on Ghowayran Prison in Hasakah:

“The attack showcased the shortcomings of existing security mechanisms. A prison holding thousands of ISIS fighters was guarded by members of unarmed self-defence units who had received minimal training before being deployed.  The inmates quickly overran this under-trained and under-equipped force.”

It took nearly two weeks to bring the attack to an end and it was only achieved with the aid of US and British airstrikes and special forces on the ground. The ICG estimates that 200 SDF soldiers died in the fighting along with hundreds of ISIS fighters and inmates. Hundreds more escaped.

That sort of full frontal assault as on Ghowayran Prison has been something of an anomaly. ISIS tactics in Syria by and large are classic guerrilla engagements of the hit and run variety: attacks on checkpoints and convoys by small mobile cells operating independently of a central command.

ISIS conducted an ambush on a bus of Syrian army soldiers in Jabal Bishri, Raqqa, on June 20, killing at least 13 soldiers. The insurgency flourishes in a climate of suspicion, resentment and fear that the Arab population holds for the Kurdish-dominated SDF. Add to that the extreme climate conditions that have significantly damaged harvests as drought conditions and high temperatures prevail and the elements for constant insurgency are all in place.

Details of the severity of the agricultural crisis are available in a report from the Turkish-based Operations & Policy Center which notes:

“Since the latter months of 2020, Syria has yet again fallen into a severe drought. This new drought is occurring in a country whose agricultural capacity has already been decimated by decades of  agricultural and water misgovernance, as well as an 11-year war, making it less capable of coping with a drought than at any point in its modern history.”

The ICG sheds light on a sophisticated and well-oiled machine that includes the bribing of elements both in the regime and the SDF:

“The north east has become a pillar of ISIS finances. The SDF-held territory is rich in natural resources, including oil and gas, and has longstanding economic links to other parts of Syria, as well as Iraq. ISIS relies on three primary funding sources: racketeering, taxation and smuggling. With this money ISIS buys weapons and supplies, offers stipends to its members’ families, bribes SDF guards to secure detainees’ release, recruits new fighters and pays the occasional hit man.”

“In many ways, ISIS operates like a mafia, preying on governing institutions and businesses through extortion and blackmail. In some cases, it has recruited local council employees to collect protection money from their colleagues. It also shakes down traders, artisanal oil refinery owners, bakers and smugglers. It is unclear how ISIS determines the amount of money to demand from each target, but SDF officials claim that oil investors and refinery owners pay thousands of dollars per month to avoid ISIS attacks on their businesses.”

The ICF report, though it paints a bleak picture, does not foresee the restoration of a caliphate. Rather it sees an ongoing insurgency, one that harasses and destabilizes, all the while building on the economic miseries that the still-unresolved Syrian civil war  and the drought have unleashed. Integral to any strategy to finally see off ISIS is cooperation between the many factions, both internal and external, that bedevil the conflict. With such cooperation seeming more a pipedream than reality, the ISIS insurgency will remain a constant threat within Syria, neighbouring Iraq and well beyond as it inspires the next generation of jihadist terrorists.