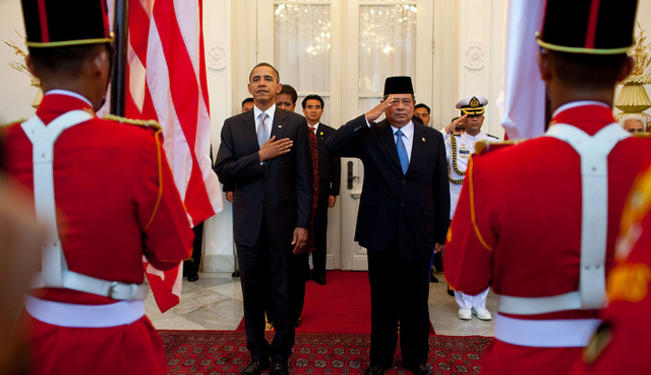 Barack Obama has been re-elected as president of the US. Given an increasingly complicated US – China relationship Indonesia now has to decide how to balance the two superpowers.

On November 6th 2012, it was announced that the people of the US had reelected President Barack Obama to a second term in office. This election and its result are of special relevance to Indonesia, as the two candidates had different perspectives on future US foreign policy outlook. The article’s assumptions are based on interviews conducted shortly before and after Election Day. Hence, while not claiming comprehensiveness, this article nonetheless allows a view into the intricate Indonesian perception of the US.

When CNN’s John King proclaimed Barack Obama’s reelection, in the ballroom of the Kempinski Hotel Indonesia in Jakarta, a crowd of about 500 people erupted into vibrant cheers. The majority of those who attended this event, organized by the American embassy, were mainly young Indonesian students. Their initial response to the re-election of Barack Obama was marked by joy. In the hours before CNN’s proclamation, when they had had the opportunity to meet and talk to the American embassy’s staff, they had displayed a deep interest in the mechanics of the US electoral system. Afterwards, interest subsided quickly: “Although the Indonesians are still fans of the president, they are clearly not as enthusiastic as four years ago”, an attending Indonesian journalist confided.

Before the election, this seemed to be a widely spread sentiment among the Indonesian population. In the days just before November 6th many did not know on what specific date the election was supposed to take place or who Obama’s opponent was. However, a majority was in favor of Obama. During the interviews conducted after the election, although there was a basic agreement that Obama was the better choice for Indonesia, two differing strands of perception could be identified. The first is marked by rather fatalistic or inwardly directed thinking. Obama is seen as just the lesser of two evils. People believe every American president is limited in his foreign policy decisions by international considerations. Romney’s and Obama’s Indonesia policy would have made no big distinction. The view of a former student activist, who worked against the authoritarian Suharto regime and is now actively engaged in the promotion of the Indonesian process of democratization, can be seen as exemplary. In his opinion Indonesia is unable to decide for China or the US, unless Jakarta   solves the most gripping domestic problems. Nonetheless, notions such as “staying free” (bebas aktif) or “rowing between the reefs” (mendayung antara dua karang) were not of relevance anymore, as “Indonesia is already too close to America. In the end, it will have to follow whatever America decides. ”Indonesia was indeed like “a pretty girl in a hostile world” and although “it has been betrayed many times, it still follows.”

The majority of the interviews agreed that Indonesia sometime in the near future would “inevitably” have to choose between the two superpowers. A closer relationship to the US would be more comfortable for Indonesia, as it already maintains closer ties with the US than with China. In this context, that one interviewee, a managing editor of the Jakarta Post, the leading English language newspaper in Indonesia, described as “a lurking danger of another Cold War”, it mattered greatly that Obama was elected rather than Romney. Although the majority of Indonesians would still disagree with many American foreign policies, the fact that Obama, who is perceived as one of them, is president has “covered up” much. With him as president, the tarnished image of the US in Indonesia, caused by the Bush presidency, has improved substantially. Obama’s rhetorical shift from confrontation to cooperation with the Muslim world was highly valued by the Muslim world in general. Indeed, some interviewees expressed the rationale that with Obama as American president, support for radical Islam would lessen in Indonesia. This would perhaps lead to a dwindling of influence of the radical Muslim parties in the parliamentary elections of 2014 and 2019.

Indonesian enthusiasm for Barack Obama has lessened in comparison to 2008, but the majority of Indonesians still feel empathetic towards him. Although many seem to lack detailed knowledge about the changes Obama brought to US foreign policy, they are inclined to view US engagement more positively under his administration. First Indonesians seem to agree that Jakarta already maintains closer ties to the US than to China and will most likely have to choose a side in near future. In opinion of the majority, Indonesia should lean toward the US in the future, a development that Barack Obama will make more likely. Furthermore, it is a simple fact that Obama’s personality and identity as president seem to “cover up”, or smooth over many details of American foreign policy that would usually be perceived negatively. Nonetheless, in the future, it is important that Obama keeps his first term promise: to be the America’s first Pacific president. Given the huge domestic problems that the US faces, he seems inclined to do so, as his first international trip after re-election took him to Southeast Asia. As an interviewed business man said: “it is about time” that the region got the attention it deserved.