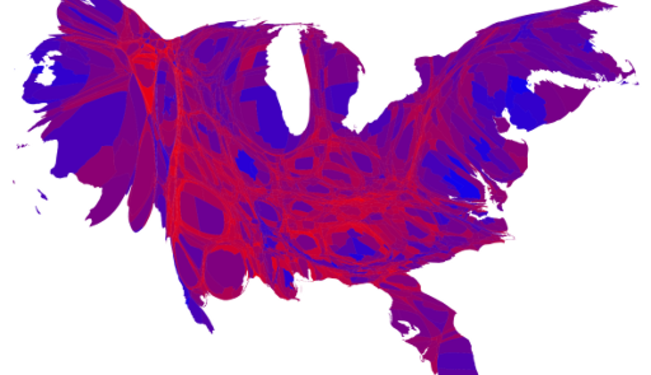 For all the talk of red states and blue states, much of America is really purple.

That simple observation has inspired some great alternatives to the standard red and blue maps depicting electoral outcomes. Princeton’s Robert Vanderbei, for example, has created an animation that makes three improvements on the standard red/blue map: he maps counties not just states; he uses shades of purple to reflect the mix of Democratic and Republican votes; and he uses green for third parties. Here’s his animation for the 1960 to 2008 elections; keep an eye out for Ross Perot. (Vanderbei also has a static version of the 2012 results.)

Michigan’s Mark Newman also adopts the purple view, with another wrinkle. Traditional maps emphasize geographic area, not the location of electoral votes (or population). Using some fancy math, he resizes and reshapes states to reflect their relative electoral import. The result resembles a smooshed butterfly, with blue areas (mostly cities) amid a red web: