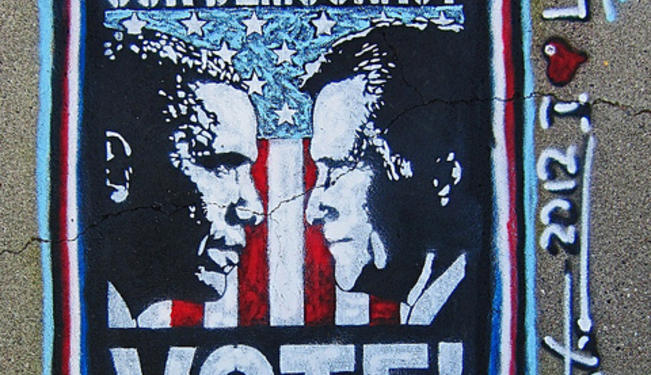 Non-compulsory voting has got to end. It is probably contrary to everything you have been told but it is true and it is time we recognized it.

The US has got to stop allowing potential voters to stay at home while others attend the ballot box and perform their civic duty and vote. Not voting has made the elections more costly, superficial and emotional. It impinges upon America’s ever-lasting search for the perfect democracy and has steered it into an ever-lasting sporting contest with the world’s last remaining super power as the prize.

I should state from the outset that I am Australian and we force all citizens over the age of 18 to attend the ballot box on Election Day. As with everything, there is a first step. The US needs to start talking about compulsory voting. Call it conscripted democracy, call it forced privileges, call it what you want but at least start talking about it. I want to start this conversation here.

If you start talking about it then maybe you will notice the one overarching theme that non-compulsory voting has provided. US elections are not about showing people you are the better candidate. They are about showing people you are worth obsessing over. It is not enough to show your policies are better, you need to convince people that you are worth taking time out of their day to leave the couch, drive to a polling booth and vote. It is a tiresome task and there are more effective incentives than a five-point plan for a better economy.

This obsession has made political campaigns extremely fashionable. Party alliance has become an identity that you show off to people you have never met with words that you may not even understand. The way you vote has literally become a part of fashion. Urban Outfitters is selling a t-shirt with Obama’s name on it, next to the faded jeans and knitted cardigans. It is pink and it forebodes the need for a secret ballot.

The idea that political allegiance can be “trendy” is simply a symptom of the underlying problem; fashion is an industry that is not concerned with rational thought or what is best for society. It is however reliant on convincing hordes of people that you are worth obsessing over and investing in – without giving any practical benefit in return. This has become the trend line of US political campaigns and it is highly concerning. For a functional democracy to work; ballots must be cast after the voter has engaged with the policies on offer; not after engaging with the pink shirt their friend is wearing.

Take the first Obama-Romney debate as a great example. It was a sporting match with the last remaining super-power as the prize and “zingers” as the play-by-plays. There are commentators before and after the match speculating on tangible details, drunken heckles can be heard in any bar in any city and the referee is always blamed for one team’s loss. You don’t support a sports team because they have a better economic policy, you cheer them on because you are obsessed with them and they have superficial advantages – your family likes them, they look better or they come from the same area as you. Sound familiar? It should, the first debate was pivotal in the polls, which sounds like viewers were more engaged. They were – just not with the policies. Commentary on Obama’s demeanour flooded the internet, the take away point from the debate was not the new economic plan that Romney had just laid out, it was that Obama had lost his “mojo”. He was becoming unfashionable and people were afraid that they would have to return their pink Obama shirts.

If you are obsessed with something then you spend money on it, like fashion. This year has already broken records for campaign finance and it is estimated that $6 billion will be spent on the campaigns total. This is insane and no one is complaining. On the contrary, the party that raises the most money is seen as the better party. That is right, the party that convinces people to take money from their pockets when unemployment is at 7.8% and spend money on a red or blue campaign factory is somehow better. You need to spend money to get people to cast a vote for you and $6 billion is apparently the bill. To put this in perspective, $6 billion is almost equal to Rwanda’s GDP.

So why are we not talking about it?

There are many systematic objections to the suggestion that we should force people to vote, the most common is that it is “compelled speech”. Freedom of speech is considered a right in this country, valued more than anywhere else in the world and for some reason people think this right should not be forced. They have apparently forgotten that citizens are forced to exercise other rights all the time. In many states, you cannot negate your right to life by committing suicide, you cannot negate the right to health by breaking health codes and across the country you cannot negate your right to education by skipping school. Voting should be no different.

The other argument is that if you choose to stay at home on Election Day then it is not anybody else’s business. This assumption relies on the idea that if a person exercises their prescribed right not to vote, they are not affecting anybody else. The fact is they are. The fact is the result of the US election now lies in the palm of a horde of political party die-hard fans and a shrinking handful of swing voters because everyone else can not be bothered turning up to decide.

Don’t misread this article. There is a lot that needs to be fixed with the U.S. elections and compulsory voting is not a cure-all. It is however a great first step in a country that is letting its future to be decided in an expensive, emotional sporting match. We have to start talking about it.