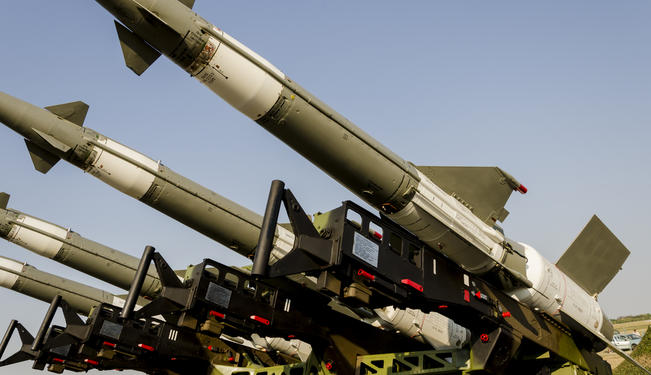 Allowing North Korea to keep its nuclear weapons may be the best way to secure regional peace.

North Korea’s unwavering and belligerent ambition to acquire nuclear arsenal has caused a great deal of tension amongst the international community in recent months. Driven by concerns over the security of its close ally, South Korea, the US was prompted to move some of its destroyer ships to Guam, off the coast from North Korea in April this year. Even though Pyongyang is now reluctantly talking about peace, its decision to return to the table has come after causing much consternation to the Obama administration. North Korea is, however, just one of the rambunctious states keeping international community on the edge with their nuclear ambitions.

Is complete disarmament the only practical solution to prevent threatening states from developing nuclear weapons of mass destruction, or can their proliferation actually be a force for establishing power equilibrium and credible deterrence?

Developments in the Korean Peninsula in recent months provide the perfect opportunity to revisit some of the political theories defined by Kenneth Waltz, the father of neorealism and who recently passed away, on nuclear weapons and how they may diffuse the threat rather than endanger global security.

Governments would be forgiven for not contemplating the idea of nuclear proliferation, for their concerns over catastrophic annihilation at the hands of states like North Korea or Iran are to a good extent justifiable. Fair Observer recently published an interview with Justin Dargin from the University of Oxford, who underlined some of the key concerns surrounding North Korea’s acquisition of such technology. Concerns surrounding the unpredictability and irrationality of the young Kim Jong-Un, who has chosen to replicate his father’s bellicosity and stubbornness on his country’s nuclear program, are most evident. Furthermore, the increasing concern over terrorist groups with similar animosities towards the Western world amounts to fears that such technology could fall into the wrong hands.

Firstly, it is important to assess the regional problems surrounding this. Most notably of course, there is an imbalance in the region. In the interview, Dargin argues: “South Korea and Japan will start thinking about building their own nuclear weapons for self-defence and deterrence purposes if they feel that the US security guarantees are not going to be viable in the future.” However, the fact that Japan and South Korea have not built their nuclear arsenal is what may be viewed as the sole reason for imbalance, and one that has allowed North Korea the opportunity to indulge in diplomatic blackmail.

It is not an isolated example. The Middle-East exhibits similar patterns in regard to Israel and its neighbours, much in compliance with what Waltz propounded in his political theories: “In no other region of the world does a lone, unchecked nuclear state exist.” The existence of such a power has led, most notably, to sanctions being placed on Iran’s nuclear program, which is suspected to be a nuclear weapon program rather than a civilian energy reactor as Tehran has repeatedly claimed. Similarly, those living in the Palestinian territory have repeatedly voiced their concerns over how the unchecked power of Israel is damaging the region as a whole. The difference could be that the nuclear powerhouse here is a US ally as opposed to North Korea, a belligerent Chinese ally and one of the last remaining communist bastions in the world.

Regional imbalance plays into the hands of the state that controls the weapons; and so North Korea, even though not the sole nuclear power in the region, is still causing imbalance in the Korean Peninsula and is seen as a threat by South Korea and Japan. It would therefore seem logical that in order to restore balance, both Tokyo and Seoul must indeed build their nuclear weapons to check Pyongyang’s hostility and aggression.

This, however, is in contrast with what Dargin terms as the “dream of non-proliferation.” Universal forfeiture of nuclear weapons and disarmament is the only way the international community can even come close to this utopian vision. But with no signs of the nuclear powers, including the five permanent UN Security Council members, ever renouncing their powerful arsenal, the only way to establish balance of power, at least in argument, would probably call for arming all other states with nuclear weapons.

Such equilibrium may, in fact, ensure that North Korea or other "rogue" states will never use their nuclear weapons as a tool for regional or global domination – a theory well argued by Waltz in the Theory of International Politics. States are self-interested actors and will do nothing to jeopardise any power that they have accumulated. Writing in the the Daily Beast, Jonathan Tepperman puts it even more bluntly: “When both sides have the ability to turn the other to ashes with the push of a button — and everybody knows it — the basic math shifts. Even the craziest tin-pot dictator is forced to accept that war with a nuclear state is unwinnable and thus not worth the effort.”

Dargin identifies that North Korea’s nuclear capability has been increasing over recent years. It is, however, well established that nuclear capabilities of the US and its allies far surpass those of North Korea. Pyongyang is acutely aware that any nuclear strike it may dare to launch, regardless of its scale, is not only highly likely to get intercepted but will also elicit retaliation of catastrophic proportions. Such a decision will be suicidal and even its closest ally, China, will not be able to protect it from the consequences. Despite North Korea’s history of aggression and bellicose, both Kim Jong-un and his father Kim have demonstrated to have understood where to draw the line.

It is the value placed on nuclear technology — both human and economic — that also stops this capability falling into the hands of terrorists. The sheer scale of technological challenges involved in devising and launching a nuclear device makes it impossible for terrorist organisations to launch a substantial nuclear terrorist attack, even though trickle of reports about nuclear black markets thriving on the fringe of former Soviet countries continues to frighten the nuclear alarmists.

There are, therefore, two solutions to the problem of international power imbalances. The first is the more agreeable, albeit practically unachievable, option of universal nuclear proliferation. The G8 summit has shown that reduction of weapons is a goal, but eradication of them is not an option. The other option, however radical or alarmist it may seem, is to allow for the development and transfer of nuclear technology in order to achieve power equilibrium in precariously imbalanced regions. For the United States, the key to keeping North Korea is not by suspending its nuclear arsenal, but by encouraging Japan and South Korea to build theirs.