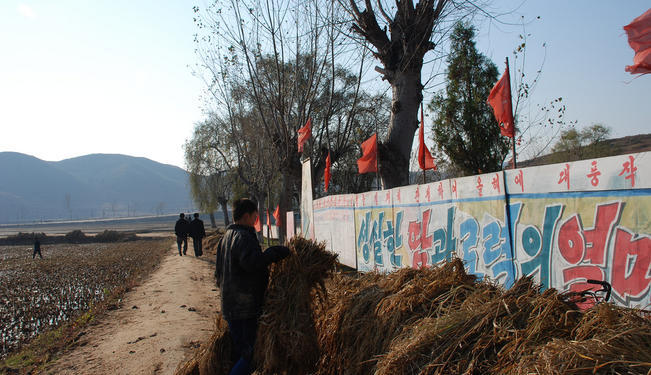 Nicholas A. Heras speaks to North Korea expert Michael Bassett about the country's internal society and its role in the international system. Read part one here.

Nicholas A. Heras: Is the peaceful unification of the Korean Peninsula under one state possible, and under what conditions?

Michael Bassett: Peaceful unification is not only possible, but it is inevitable. North Korea has wanted unification, as a top desire, since 1948. Kim Jung Un's unification policy is geared through engagement with South Korea. South Korea wants to unify when North Koreans are more socially developed, because such a rapid economic migration from North to South would result in social and economic chaos. The unification process would most likely and most smoothly occur if the US and North Korea were to normalize bi-lateral relations, and if the US was to lift all sanctions and embargoes, and help the North Koreans to develop their special economic zones much like the way China developed.

This also means separating the issues of contention from the peace process, i.e. nuclear weapons and human rights abuses. The US would most likely have to give North Korea de facto nuclear recognition, which is totally unacceptable for most people. But in reality, it wouldn't mean much difference or have any effect on anything. It's very much like a marriage certificate says something on paper but has no impact on defining the relationship of the couple involved. Next, a peace treaty would have to be signed, and then from there about 15 years of economic development would have to occur.

South Korea and China cannot economically afford the responsibility of absorbing a burden of 23 million indigenous peasants from North Korea. There would have to be some social and psychological modernization and transcendence that comes along with development. After that period of time, unification could take place. I imagine that with a peace treaty would come more ability for inter-peninsula travel, so it wouldn't be too shocking when unification takes place. Development of the sorts required wouldn't cost insane amounts of money, and it could come from public and private investors. The main challenge is getting sanctions lifted so it's all possible. Japan should lead the way in paying the initial sum for North Korea’s development, by issuing North Korea colonization reparations, which Japan has issued to every other country they have occupied except for North Korea.

Heras: On the topic of Japanese-North Korean relations, how likely is an expansion in North Korea's nuclear weapon stockpile would compel its enemies, most prominently Japan, to seek to obtain their own nuclear deterrence capability and is an "East Asian nuclear arms race" a realistic scenario?

Bassett: Japan has been drifting away from its post-World War II deals for over a decade. Though Japan’s government uses the North Korean government’s harsh rhetoric and military first policies, and its outlawed nuclear program, and kidnapping of Japanese citizens as justification for Japanese military expansion, North Korea’s actions do not justify Japanese military expansion. The US guarantees Japan’s security on paper and on the ground. The entire US Navy 7th Fleet is in the East Pacific, and the US military is a phone call away in Afghanistan. Japan seems to have ulterior motives for building up their military and successfully regaining the power of independent offensive action, but as to what they are, one can only speculate. It is my opinion that Japan should remain reliant on the security provided by their proctors.

Heras: Is it accurate to state that war on the Korean Peninsula is a more frightening prospect for the Chinese government than it is for the US government and its allies in the region?

If there is one thing that anyone should know about the North Korean government, is they are not suicidal. The number one priority of the regime is survival of the regime. South Korea most certainly does not want war. In response to the prospects of North Korea conducting a third nuclear test, the new Park administration has warned of sanctions, but has said that whatever actions they impose, would be sure to not result in continued development of a peace process. Park is very careful not to destabilize the region or South Korea’s relations with its neighbors. In spite of how the media portrays President Park, she is very much a pacifist.

President Park, often compared to her dictator father who was the former president of South Korea, is actually seeing the forest for the trees. She knows that nothing can be accomplished by rattling sabers, and that South Korea has worked incredibly hard to develop economically in the past 30 years, and they don't want to lose what they've worked so hard for. So again, the prospect of war is slight.

Heras: What do you hope that the international public understands about North Korea that it isn't always informed about?

Bassett: I would ask the international community to see North Korea through the eyes of its people like I do. We are all humans on this planet and are equal parts flesh and blood and have brains and souls and hearts. We can only communicate and coexist if we try to understand each other and put aside every slanted misconception we have about North Koreans. It took me a decade to understand North Korea, and I was focusing all of my time, energy, and resources on it. If you want to understand the relationship between the US and North Korea, read 1984 by Orwell. Then visit the North Korean social networking sites and read the blogs of foreigners who have lived there. My good friend Joseph Ferris is an American Ship Captain who, in his spare time, is a tour guide for North Korea. He has a very well developed blog called "An American in North Korea," which is a treasure trove of pictures and stories that go along with them.

Another good friend, Felix Abt, recently published a book called "A Capitalist in North Korea." He was one of the only westerners to have ever directly worked in Pyongyang on development and despite lack of funding, he made a huge impact in his seven years living and working there. Tourism, I would argue, is very important for the future of North Korea, and its relationship with the international community. The purpose of North Korea tourism is two-fold. One is the economic benefit, and the other, and most important one, is the cultural exchanges that take place. These experiences last a lifetime and are special. It humanizes the situation. Humanizing any situation is a good rule to live by in any dealing we conduct with anybody throughout our lives, and should be no different when dealing with North Koreans.