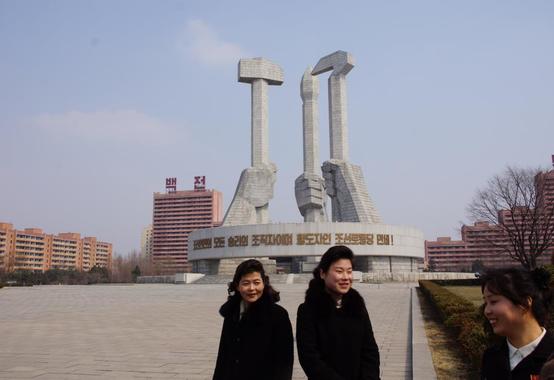 Brinksmanship is a logical tactic deployed by North Korea when it feels backed into a corner with nothing to lose, because it has everything to gain. [View, In Pictures: A Note From North Korea (Part 2)]

The annual round of brinksmanship between the US and the Democratic People’s Republic of Korea (DPRK) is seemingly more intense than in years past. This is a tactic that makes perfect sense for the DPRK, as no country has any political power over it. It is a tactic that is usually initiated by North Korea for the purpose of forcing the external world to give it concessions, and hopefully, a little respect. The DPRK wants mutual recognition and normalization of relations, and it sees the strategy of brinksmanship as an effective tactic because, at the minimum, it forces the world to ask the question: “What do they [North Korea] want?”

There are several myths regarding this tactic, which are false. First, China has no more political power in North Korea than the US or South Korea has. Second, the DPRK does not want temporary aid. It wants sustainable and responsible aid, which it can use self-sufficiently. Third, the North Korean government is not suicidal, so its threats are empty. Fourth, the core of North Korea’s foreign policy is centered on Kim II-sung’s dying wish, which was laid out in detail in his final book, “The Ten Point Plan for Unification.” Reminders of this filial piety are displayed in North Korea as one travels from the southwestern city of Kaesong towards the De-Militarized Zone (DMZ), when they must pass under the Unification Monument. When one arrives at the DMZ, there is one singular billboard. It states, “Let us inherit one unified country to our next generation.”

During periods of annual brinksmanship there seems to be some finger pointing between Washington and Pyongyang about who started what first, and as the Washington Consensus rules, it always settles that debate rather quickly. However, this period of brinksmanship is highly peculiar because Pyongyang’s position is that they tried to engage the US on numerous occasions since Kim Jung-un took power, but Washington ignored those efforts. There is truth to this, which is evident in the Obama Administration’s “Strategic Patience Policy.” This policy is designed to be totally unresponsive to any positive developments in Pyongyang, unless it regards the nuclear weapons Non-Proliferation Treaty (NPT). The administration has missed numerous opportunities to improve conditions and behavior within the DPRK due to this policy. These opportunities are evident of a regime ready for change, and are displayed by North Korea’s emerging entrepreneurial class, its Disney Performances, its Google Earth mapping, its Basketball Diplomacy, and direct communications requesting talks.

This period of brinksmanship begs the question, “why is this happening?” more than “what do they want”. The answer is hidden behind this distracting wall of brinksmanship. While the majority of the pundits focus on inevitable war with a regime that has no real capability or desire for it, the Obama Administration smoothly lays a legal framework for its “Asia Pivot Policy,” which was enduring a setback when pundits discovered that the Sankaku/Diaoyu Conflict was grossly misrepresented, and even seemingly fabricated by the talking heads in the media. A Maritime Act had resolved that “conflict” back in November, which divided the islands into three economic zones, and China had again successfully achieved its main goal of regional stability.

This year’s period of brinksmanship was on all historical accounts propagated by the media, sensationalist authors, movie producers, and pundits with little detailed empirical knowledge regarding the DPRK. The US narrative created mass profits for all the aforementioned actors, and effectively threw North Koreans under the bus. This rhetoric was not toned down by the Obama Administration, despite clear evidence that there were no credible threats. This was because the Obama Administration has larger strategic goals in the region, and it too fell in line with throwing North Korea under the bus for that strategy. The “Asia Pivot Policy” is really nothing more than a new Cold War in Asia and is designed to contain China. China has no political power abroad, but it is an economic threat to the national security of any country, which is why the Obama Administration desires to contain it. The legal basis for this, as stated, is based on irrational fears, mistrust, and realpolitik.

This is not sufficient for deploying forces to contain a nation, and even containing a nation isn’t acceptable in contemporary international law. The war in Afghanistan and the Asia Pivot promises to effectively contain China. The legal basis for the Asia Pivot was destroyed by the Senkaku/Diaoyu resolution. But using the Korean quagmire as a legal basis for the pivot is highly reliable and easily manufactured into a proxy war. Sadly, the South Korean government stated that it desired direct talks with North Korea — which would be a first step towards mutual recognition — until John Kerry met with the Park Administration. Soon, Park Geun Hye will report to Washington to kowtow to the Washington Consensus, as the US has, and always will be seen by the South Korean masses as the proctor of their existence and their comfortable way of life — much like the US has been Israel’s proctor for so long.

History repeats itself. The Korean Peninsula has been a “speed bump” in wars between the West and the East for centuries. The Park Administration may desire to tell Washington that, “this is our peninsula and we want stability and peace here.” It will be highly unlikely to stand up to Washington because it would be the political suicide for the woman who has the potential to be the next “Iron Lady.” South Korea’s younger generation has forgotten its shared history with the north, and is on the path to becoming as Westernized as Japan. This South Korean younger generation is not willing to gamble with their newfound economic prosperity and a pervasive culture of extreme neo-capitalistic superficiality, especially after the pain of South Korea’s post-Korean War development efforts.

[Note: The views expressed in this article should not be construed as the official position of 361 Security.]