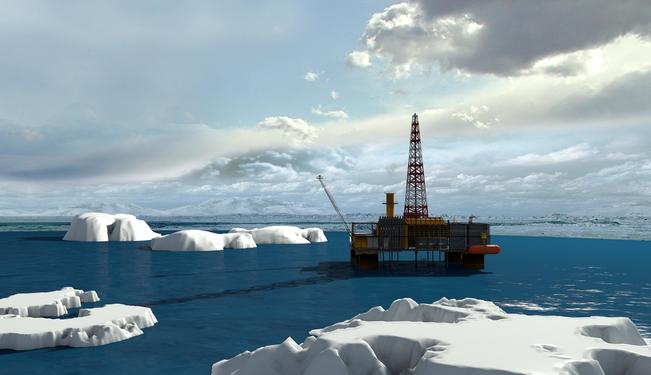 Will the Arctic be a site of conflict or cooperation?

The Arctic, a region composed of the area above 66.34° north latitude, may be the last great frontier on earth, but its time as a frigid backwater tackled only by the intrepid few may finally be coming to an end.

The Polar region encompasses only 6% of the Earth’s surface, but contains some of the largest untapped reservoirs of oil and gas in the world. The United States Geological Survey (USGS) estimates that the Arctic region likely holds 13% of the world’s undiscovered oil reserves and 30% of its undiscovered reserves of gas.

The Arctic is in the midst of a radical transformation. Global warming trends have caused sea ice to recede by record levels, about 8% per decade, unleashing the potential for wider exploration of hydrocarbons and minerals than ever before.

With the area opening to greater human activity, the Polar region has once again caught the eye of policymakers (the region was once the site of heightened Cold War activity), who are looking increasingly northward. Will the Arctic be the site of conflict over finite resources and crowded shipping lanes? Or will cooperation over resource extraction, environmental sustainability and the protection of indigenous cultures prevail?

The Arctic is currently warming more than twice as quickly as mid-latitude regions. The changing realities in the Polar region mean that steadily rising temperatures will continue to improve accessibility to the previously inhospitable area. Shrinking arctic ice caps, the depletion of summer sea ice, and receding on-shore glaciers now provide a wider seasonal window for off-shore drilling and have allowed trans-Arctic maritime shipping lanes to become a reality. Coupled with technological advances, warming trends will temper extreme weather conditions and will ensure the commercial viability of economic interests in the Arctic for years to come.

As the region continues to be exposed to increased activity, a host of problems will undoubtedly emerge. Foremost among them is the threat of violence erupting over the Arctic’s limited spoils – most notably fossil fuels. Hawkish observers discuss the High North as the site of a new "Cold War" and point to increased military activity as evidence of the stakes involved, whilst skeptics dismiss the possibility of conflict as an unnecessary distraction.

At the moment, there are eight Arctic countries. However, based on sovereignty, only five of them can lay claim to any of the riches found in the northernmost region of the globe. The United States (by virtue of Alaska), Canada, Norway, Denmark (by virtue of Greenland), and Russia make up the five littoral states of the Arctic. The eight, including non-coastal Finland, Sweden, and Iceland, are all members of the Arctic Council, an intergovernmental forum founded in 1996 to address issues regarding the Arctic and to facilitate cooperation. With only eight states jostling for their share of Arctic wealth, is there any reason to be concerned for security in the region?

Currently, there are five outstanding disputes between stakeholders in the Arctic:

Each dispute seems innocuous enough, being based more on historical chance and cartographical disagreement than any serious political difference. The United Nation’s Convention on the Law of the Sea (UNCLOS), which came into force in 1994, was meant to define the rights and responsibilities of nations’ oceanic activity, including the extraction of marine natural resources, in order to provide a basis for resolving maritime disputes. However, the US never ratified the convention and a number of issues related to its codification in international law have left its application in doubt.

Instead, in 2008, the five Arctic coastal states came together to agree upon the Ilulissat Declaration, which laid out a framework to resolve any territorial disputes and strengthen cooperation. This was a concerted attempt by the Arctic littoral quintet to create a regime for governing the Polar region. So far, the declaration has seemed to succeed as Denmark and Canada near an agreement on the future of the Hans Island or when in 2011, Norway and Russia came together to sign a deal splitting the Barents Sea equally, concluding long-standing disagreements over how to settle seabed and maritime borders. The agreement was emblematic of the way Arctic nations have recently renewed efforts to prioritize cooperation over conflict.

Despite decreasing sea ice in the summer, exploration and off-shore drilling possibilities are not without considerable challenges: severe weather, high operating costs, and the technical challenges involved in drilling beneath the Arctic seabed all present sizeable tests. Shell has spent over $4.5 billion developing its Alaskan Arctic program, with no material to show for it, beside an expensive lesson about operating in an Arctic climate. Recently, a Shell oil rig, the Kulluk, was damaged when it ran aground near Kodiak Island due to stormy weather, prompting Shell executives to scrap the program’s operations for 2013. In such an inhospitable region, geography and climate make coordination and cooperation preferable to antagonism.

Beyond multilateral diplomacy and operating difficulties, four of the five Arctic coastal states, excluding Russia, and five of the eight members of the Arctic Council, except for non-coastal Sweden and Finland, are members of NATO. Furthermore, the reality on the ground — or, more appropriately, under the ice — in the Polar Region is that according to Danish estimates, up to 95% of Arctic energy falls within delineated national boundaries. Conflict seems much more likely to occur over trans-Arctic shipping passages than over Arctic minerals. With the Arctic delineated by just five players, is the area even worthy of being considered a potential area of conflict?

Russia, the only non-NATO member of the quintet of littoral states, has the most at stake in the Arctic. If the Russian claim of the Lomonsov Ridge, currently under consideration by the UN Commission on the Limits of the Continental Shelf, is upheld, it will be in possession of half of the Arctic region. Even without the full extent of the Lomonsov Ridge, Russia will still be in possession of the lion’s share of Arctic spoils with the largest area of prospective off-shore drilling along its 10,000 mile Arctic coastline from Europe to Alaska — 43 of 61 significant fields falling within its jurisdiction.

Russia, obdurate to any interference in its internal affairs, has been remarkably subdued regarding Arctic issues. The extraction of mineral resources is a major component of the Russian economy, and the Kremlin is looking to expand its offshore activities in the Far North to offset the declining production of several major Siberian oil fields. However, Russia lacks both the expertise and liquidity necessary to jump-start the development its Arctic assets. Perhaps the primary reason the Kremlin has been amenable to Arctic related matters is the hope, or promise, of complementary assistance when it comes time to cultivate its sizable Arctic resources.

Rosneft and Gazprom, the Russian state oil and gas companies respectively, have both forged agreements with a number of multinational petroleum companies to assist in the development of their northernmost assets. In Russia, politics normally trumps commercial interests. But in the case of energy, Russia’s commodity driven economy is highly dependent. Taxes on oil and gas, MET (mineral extraction tax) and export duties account for approximately half of the government’s annual budget, while 60% of Russia’s exports are oil and gas-related. The willingness of Moscow to allow Western companies into Russia points to an increased willingness to cooperate and the creation of a peaceful equilibrium in the Far North.

In the end, it is difficult to imagine conflict erupting in the High North. Changing realities in the Arctic have shifted the focus back north, but heated rhetoric about an Arctic power struggle seems to be just that — rhetoric. Inhospitable conditions, the delineation of major assets, and signals by major players for sustained cooperation point to minimal friction occurring, which all amount to remarkably tepid geopolitics in the icy Far North.