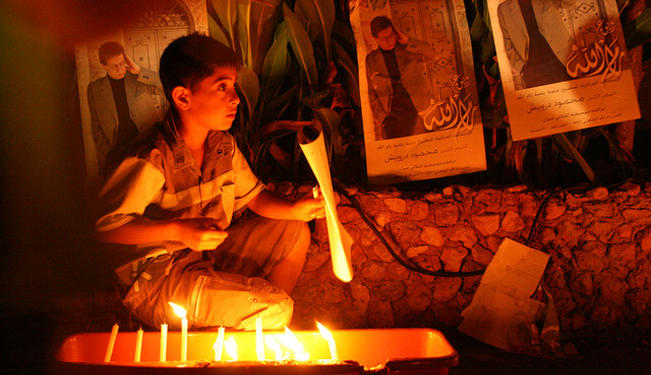 Can poetry help us through times of political upheaval?

“It is difficult to get the news from poems, yet men die miserably every day for lack of what is found there.”

Physical distance is difficult because of the helplessness it engenders. To see one’s world unraveling continents and oceans away and to feel that you can’t do anything can be terribly frustrating. But with distance, one also sees more clearly. Art, as I understand it, and this includes philosophy, is about cultivating a certain distance so that we might, in turn, lend our vision to those in the thick of historic events. One cannot evaluate the play while sharing the stage with the actors. This is how I justified my decision, as an Egyptian, to remain in the United States, my adopted home of the past six years, during the Arab Uprisings.

Since the Egyptian revolution began over a year ago, discerning the meaning of poetry in trying times has been a quandary very much weighing on my heart and mind. Until then, I pretty much viewed art and politics as separate spheres. Journalism, I thought, was better suited to tackle the here and now, like Kierkegaard’s parable of the “matchstick” men: upon their head is deposited something phosphorescent, the hint of an idea; one takes them up by the leg, strikes them against a newspaper, and out comes three or four columns. Artists were creatures of another order, I suspected; they were closer to Nietzsche’s lovers of truth (in “Zarathustra”): “Slow is the experience of all deep wells: long must they wait before they know what fell into their depth.”

Of course, Kierkegaard is not being entirely fair to journalists, and there is a place and a need in this world for both: speed of coverage and slowness in reflection. For a journalist to achieve his highest function, which is to serve as a kind of moral watchdog, it might be necessary to rush – to the battlefield and to print – to keep their eye on the moment and to tell the story as it unfolds. Such near-sightedness is a virtue. For their part, artists and thinkers excel in a form of far-sightedness, somehow seeing just past the moment, over its head, to tomorrow. That is how they are able to lend us their vision.

And so it is that I have come to realize the role of poetry in times of crisis: vision. By “vision” I mean that unblinking witness is only half of the equation. This is what I mean by seeing over the head of the times. It is not enough to bear witness to now; journalists, to an extent, do that. Poetry lends us a third (metaphysical) eye, one that collapses distances, at once reminding us of our essential selves and who we can become. This vision provides more insight than mere sight.

Back to the here and now. There is a very touching story (one of many that do not receive media attention) that came out of the Egyptian revolution that I’d like to share. A middle-aged man learns of a young activist having been (deliberately) blinded in scuffles with the Supreme Council of the Armed Forces, and calls in to a television show offering to donate one of his eyes to the unfortunate young activist:

“I’ve heard the dead can donate their eyes for transplants,” he reasons, “and so this should work since I’m alive.”

“And, you’d do this? Donate one of your eyes for a complete stranger?” the TV broadcaster, asks incredulously.

“Yes,” the caller confirms, with feeling. “That young man lost his eyes fighting for freedom, for all of us. So, while I can’t offer him both my eyes, I’d like to offer him one, to split the cost of freedom.”

Poetry, at its finest, can restore our sight. The pen is the seismograph of the heart, as Kafka is supposed to have said in conversation with Gustav Janouch. If writers are equipped with sensitive instruments to register inner quakes, then how can they fail to note when the entire world itself is in a state of convulsions? Yet, in order for the art not to be poorly digested, it might take artists time to process what has fallen into their depths.

An excellent instance of such witness-art, a form of spiritual journalism really, is Libyan-American poet Khaled Mattawa’s poem on the aftermath of Muammar Qaddafi’s death, “After 42 Years”. More drawn out than the uprisings in Tunisia or Egypt, the human cost in Libya’s revolution was (and remains) sickening – not unlike the current carnage in Syria. Enough was too much, and there seemed no end in sight. Then, out of the blue, we learned of Qaddafi’s capture. How to make sense of all the suffering, the waste of human lives, and to restore to the living their dignity, lost years and possibilities? This is the catharsis Mattawa’s masterful poem offers.

I wept, as I imagine countless others must have, as the poet traced the outline of Libya’s pitiable history, beginning with the bloodless coup: “The country like a helpless teenage girl / forced into marriage hoping her groom will be kind.” Sparing us no detail of the vicious atrocities, humiliations, and daily deprivations endured by his people over decades, as well as the psychological toll:

“What and who taught you, O' sons of my country, to be so fearless, cruel?

This is what poetry can do in difficult times, to speak our silences and make sense of our pain, harnessing the anguish of so many souls – what Kafka, in a letter (to Oskar Pollak) says about books being ”an axe for the frozen sea within us.” Someone once said: if you want to know what the moon is truly like, send a poet. Mattawa’s report from planet Libya on the moral aftermath of Qaddafi’s rule is heart-rending and more meaningful in a way than any of the coverage in print or on television. Why? Because it is journalism of both the outer and inner lives of a people; his poetry dares to carry upon its back the otherwise unimaginable agony of countless souls.

“State of Siege” by the late, great Mahmoud Darwish is another magisterial instance of witness art: a smashed vase of a poem, not unlike Eliot’s “Wasteland” (“these are the fragments I have shored against my ruin”), only in this case it is the very real wasteland of Palestine that Darwish surveys. It makes sense, in a time of war or siege, to speak in shards; in such times of duress, the world appears shattered, and fragments are what the artist is left with when they can muster the concentration, the energy, and the faith to put pen to paper and write something down.

Like Eliot’s “Wasteland,” the void is never far awayin Darwish’s “State of Siege.” Unlike the parched faith of "Wasteland," however, “State of Siege” is seared by a near mystical love; amid the rubble, an affirmation of earth and angels in the same breath. Faced with the abyss, hope obstinately arises. Hate is transmuted, and enslavement has the poet dreaming freedom: “A little, absolute blue / Is enough / To ease the burden of this time / And clean the mud of this place.” But first pain must be set aside, as an unsteady burden preventing one from traveling light, “like those who ascend to God do.” Interestingly enough, trafficking as Darwish does here with eternity as the nearest hope, the poet refuses to relegate poetry to a secondary concern, lamenting the cost of violence on art.

Out of the other side of his mouth, though, Palestine’s national treasure expresses an ambivalence, warning us against loving (his) words overmuch, during hard times: “We do not care much for the charm of adjectives…Do not trust the poem…Writing is a small puppy biting nothingness.” Instead, the poem expresses a deeper allegiance to the tribe of humanity, to beauty, to Home (in this case, Palestine) as a state-of-being. Things that people everywhere can appreciate, or should.

In this manner, the poet reconciles the false distinction between the active life and the contemplative life, since his words are also actions. Specifically, in those first heady days of the Egyptian revolution, a great deal of pent-up creative energy was unleashed in the streets, and much of it took the form of poetry. Before and after things got ugly – courtesy of the previous regime’s rent-a-mob – Al Jazeera reported spirited poetry readings at Tahrir Square. Protestors heartily sang the punchy poems of legendary Egyptian poet Ahmed Fouad Negm who, in his bold verse, has been using puns and colloquial speech to critique the state and mock its corrupt leaders for a few decades. A much younger poet, Tamim al-Barghouti, also came to be regarded as one of Egypt’s revolutionary voices. Though he couldn’t be in Egypt during the demonstrations that ousted Mubarak, al-Barghouti faxed a new poem back home after the government-imposed Internet blackout. His poetry was photocopied and distributed throughout the square and, when people erected two massive, makeshift screens in Tahrir, al-Barghouti was able to virtually participate in the revolution after all, by reading his words to the gathered crowds.

Despite these instances of political poetry, I believe that, at its heart, poetry is apolitical – even if it is sometimes employed in the service of politics – since it cannot take sides. In addition to serving as a witness in times of crisis, poetry can act as a sort of (inner) alarm system, activated when we've strayed, trespassed or tripped into unholy territory. Reminding us, like American soldier-poet Brian Turner does in his exemplary “Here, Bullet” that: “it should break your heart to kill…nightmare you.” This is what I mean by poetry as spirit journalism, a report on the life of our collective spirit, a reminder of our higher estate, and allegiances to one another and life.

Of Eros and of dust,

Beleaguered by the same

[A version of this article was originally published at The Mantle.]

No Velvet Glove Criticism: Towards a Political Effectiveness of Art
Friend and Foe: On Politics and the Arts