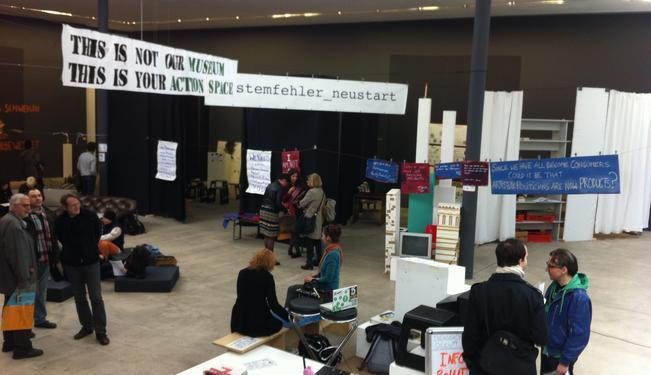 The curators of the Berlin Biennale dream of an art that has a direct impact on social life, one that transforms and designs it. Current developments in art, looked at critically, are blemished for feeding capitalist needs or illustrating social or political problems from a safe distance.

In his statement for the 7th Berlin Biennale for Contemporary Art the curator and artist Artur Żmijewski describes the concept in one sentence: “We present art that actually works, makes its mark on reality, and opens a space where politics can be performed.” The title of the Biennale,“Forget Fear”, is an expression of being not afraid of bringing about real effects and taking responsibility for them.

The jury of the Berlin Biennale invited the artist Artur Żmijewski to become the chief curator of the 7th Biennale. Joanna Warsza and the Russian group Voina joined as curators. As a point of departure for this year, the Biennale makes a fundamental critical observation that “art does not act, and doesn’t work” despite “its enormous potential for conceiving and creating a reality or practicing politics”. To put it differently, according to Żmijewski art has become impotent. To change this – to bring its potential to everyday life – artists and non-artists have been invited. Among the non-artists are a lot of groups summarized under “movements”. Their highly debated participation is seen as a “collective experiment” whose goal is not to present art but to push forward political concerns. Under the title “Indignados/Occupy Biennale”, one of the main spaces at the Kunstwerke is dedicated to various movements – from Occupy Berlin to 15th Movement (Barcelona, Madrid). They are considered as teachers for the curators, artists and visitors. It is a non-curated section that allows political activists to join the project, to participate in the funding, support structure, mediation and public attention. The individual artists range from Marina Naprushkina to Joanna Rajkowska, from Martin Zet to Mirosław Pateckiand are as heterogeneous as the invited organisations and presented projects. Besides open formations such as Occupy, institutions such as Stiftung Flucht, Vertreibung, Versöhnung or organisations like Key of Return – Aida Refugee Camp are joining the Biennale. Some of the organisations are initiated by artists who operate, in parallel to their politically or socially driven activities, successfully in the art market such as Olafur Eliasson, who is invited with his Institut für Raumexperimente or Yael Bartana, who initiated the project “The Jewish Renaissance Movement” in Poland. In addition, re-enactment groups can be found as well as new collectives such as New World Summit, initiated by the artist Jonas Staal and the Draftsmen’s Congress, initiated by the artist Paweł Althamer.

This kind of diversity is deliberately wanted. It is clearly mirrored in a project by Żmijewski himself entitled “Democracies” (2009-2012), which consists of 25 short video films: footage of crowds at political rallies, gatherings of soccer fans in Germany, a right wing politician’s funeral, political demonstrations, military re-enactments, border controls and uprisings in Gaza and parades. All videos document various manifestations of public opinion. Żmijewski’s “Democracies” series and the concept of the Biennale both suggest that society is essentially a struggle of conflicting interests which must be tolerated and constantly negotiated. (The curator/artist has highlighted several times the fact that he does not share all the agendas of the ones he has invited.) Consequently Żmijewski’s series and the Biennale make no distinction between lifelong political commitment, spontaneous actions, naivety or discrimination of others. Looking at this and reading about Żmijewski´s refusal “to ride the postmodernist merry-go-round of cultural pluralism”, one might be intrigued by the pluralism the Biennale offers when it comes to notions of politics. Politics diffuses to various expressions that coexist shoulder to shoulder. This follows the conviction that various rivalling political stances should be presented and thereby invite disagreement, confrontation and lose control over meaning. One could look at this also as not taking up a stance and hiding behind a multiplicity of expressions, but embracing them all. Ironically, the strategy of embracement is widely used in the capitalist sphere as well.

When it comes to the real effects of art one can hardly avoid asking: when and to what extent do they happen? How visible are they and who measures them? The impact leading to change can be made on a single person, on his or her perception, on his or her way of thinking and acting. In the end this depends largely on the opennessand willingness of the recipient. However, this kind of impact is not in the focus of the Biennale. Artworks are meant to shake society, loudly and aggressive, unavoidably, manipulatively – at least as pointed out by Żmijewski or Voina who plea for radical actions and revolutionary art. Harmless and meaningless art is drastically rejected: “Our guns are aimed at art, that it keeps away and that it does not spread its putrid smell.” To be fair, not all artworks and projects at the Biennale are that aggressive. Some play with manipulation and aggressive image policy, such as Yael Bartana, others consciously avoid any sensational speculation,such as Anna Baranowsky & Luise Schröder. Next to Mirosław Patecki, who designed the largest statue of Jesus Christ in the world in a small polish town called Świebodzin. Baranowsky & Schröder´s quiet film shows the organisation and inauguration ceremony of the monument´s erection and the clearing up procedure after, leaving the main event out of focus.

Rhetorically the Biennale addresses old conflicts in the field of art and in its relationship to society that have never been resolved and most probably cannot be at all, but they are the expression of a deep desire: the desire tobe socially relevant and not servea snobbish society. Without a doubt, it is worth intensively engagingin this subject and asking about the role of art in currentsocieties. But is it not time to overcome simple confrontations and old concepts of the enemy? The Biennale presents neo-liberal elites, the curator, the art-market, individualism, aesthetics and intellectuality as enemies without making any differentiationsat all but huge generalisations. There is a fundamental mistrust in aesthetic objects and aesthetics, in individual expression and in documenting non-artistic reality without interfering in its course. Instead political art is favoured that “acknowledges the superior status of life’s praxis over aesthetics and the superiority of that which is collective over that which is individual, seeing existentialism and spirituality as juxtaposed to the materialism of the system of social and economic organisation,” as Igor Stokfiszewsk, a member of the Polish community Krytyka Polityczna, puts it. According to Stokfiszewsk antagonizing tensions should be identified and conflicts that take these tensions to the extreme should be evoked “so that they may be resolved and generate a new collective, one in which the hitherto existing conflicts are no longer valid.”

Apart from the mystification of the collective and the practitioner – highly romanticising approaches in my eyes – this sounds like a message of salvation. Ironically, the Biennale finds itself in the midst of tensions that seemingly cannot be resolved and that lie in the social and economic fabric of the Berlin Biennale itself. Zmijewski is overfulfilling the expectations the jury had by appointing him.Whereas media rumours say that the previous Biennale was too silent and almost forgotten after its opening, this year’s has fed the machine of public attention well and helps Berlin to confirm its successfully sold image of being unconventional, experimental, innovative and now also self-critical. In the centre of attention is a strong individual, Zmijewski the chief curator, who presents himself as a rebellious anti-curator, actually confirming 100% of the non-conformance of art. Sure, one could look at this the other way round, saying that this attention helps to realise political ideas. And the curators try to play this game by using the Biennale machine, effectively installed by Klaus Biesenbach, a curator who works in the eye of the typhoon, at the MoMA in New York, an institution completely infused by capitalist thinking. Thus, who is instrumentalising whom? Who is complicit with whom? Who is acting on behalf of whose contract, and which interests are being catered to by whom? On the one hand the Biennale tries to challenge and provoke the economic system, on the other it feeds its needs.

The Poet as Journalist of the Spirit
Friend and Foe: On Politics and the Arts