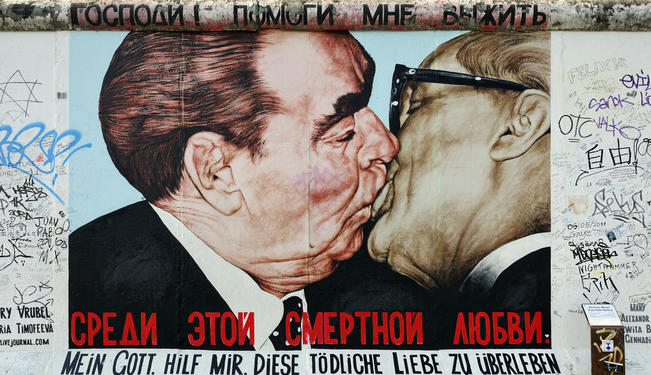 Yessi Bello explores the premise that graffiti is a valid form of political activism as opposed to a form of vandalism. The article outlines the reasons why graffiti should be considered as an art form serving as a political commentary of the time, using the Berlin Wall as a case study. This article is the first of a three part series.

From 1961 until 1989 Berlin represented the tangible division between two diverging forms of government on the political spectrum; an oppressive Communist regime in its Eastern sector and a democratic allied government in its Western sector. The pre-eminence of Berlin during this time period has resulted in the consequent exploration of one of its most notorious Cold War monuments: The Berlin Wall. The Wall represented a clear infringement of basic human freedom in East Berlin, but its Western-facing side became a widely recognised medium for political activism in the form of graffiti, which began to appear as early as the 1960s.

The analysis of the Wall’s graffiti poses a series of questions. There is no question that the Berlin Wall was a matter of national concern, which was specifically represented by the graffiti of those residing in West Berlin. But is it possible to use the Wall’s graffiti to claim that it was also of international political relevance? Was its surface used as a medium for protest on international political issues? If so, can we use the East Side Gallery as a pertinent case study to answer this question?

The Berlin Wall as a White Canvas

The final stage of the Berlin Wall was the most crucial for the emergence of graffiti. This was because its concrete slabs were seamlessly connected and boasted a perfectly smooth surface, which facilitated the paint’s adherence. Heinz J. Kuzdas, photographer and author of Berliner Mauer Kunst: Mit East Side Gallery, affirmed that this new and upcoming form of artistic and personal expression began to mirror the “zeitgeist”, i.e. the spirit of the times. Therefore, it was the Wall’s final construction that came to be regarded as a “white canvas” or a “tabula rasa” for artistic proliferation and political expression.

The artists’ work was facilitated by the Wall’s structure and context. The graffiti and artwork appeared on the Western side of the Wall, (which was in fact in the GDR’s territory). As a result, West Berlin was both unable and unwilling to prohibit the activities of those graffitying the Wall, which could be interpreted as a continuation of the West’s predisposition to ignore the construction and the intrusion of the Wall. This vacuum of authority served those wishing to leave a personal mark on the Berlin Wall. At first, most graffiti was carried out quickly and at night so as to avoid possible persecution by East Berlin guards. However, artists knew that they simply had to jump back into West Berlin’s territory to avoid being prosecuted.

Most graffiti in the 1970s was carried out by amateur West Berliners, whose work would have been directly fuelled by their personal experience of the restrictions imposed by the Wall, thus providing a primary political commentary. During the 1980s re-known artists such as Keith Haring, Christopher Bouchet and Thierry Noir became increasingly daring and began to express themselves regardless of the time of day or night in a more elaborate and professional manner.

There are a number of interpretations which treat graffiti either as a crime i.e. vandalism, a form of communication, as art or as politically or socially unacceptable. The history of graffiti enables us to claim that it has been used as a conveyor of social and political messages when no other means of expression were available.

The motives of graffiti artists are diverse and little attention has been paid to the causes of graffiti, which can be placed into two main categories: as a form of mass communication or as an expression of individual frustration.

Graffiti has been misinterpreted as a visual form of vandalism. However, viewing graffiti as a socio-political phenomenon it can be stated that vandalism and graffiti derive from a variety of personal motivations and socio-economic environments with most experts agreeing that there is a fine line between vandalism and graffiti.

As William F. Buckley JR, an American Conservative commentator claimed “in Eastern Germany when local people had no means of recognition in times of war and political unrest, graffiti was placed on the Berlin Wall as a form of self-expression”. This reflects the fact that graffiti has always been intimately linked to the reigning political and economic conditions.

The graffiti on the Berlin Wall may have been technically illegal, yet this did not mean that it was not an invaluable form of visual protest. Berlin’s division was the perfect environment for graffiti to flourish.

Graffiti artists consider that public spaces belong to the community and as such community members should decide what is displayed in them. They consider that a bare wall is “a symbol of a sterilized, tightly regulated environment” and that they are much more disconcerting to look at, than one covered in graffiti. With this in mind, it can be argued that West Berliners had the right to graffiti the Wall as they were obliged to co-exist with it. In their eyes the GDR was the culprit; it constructed a colossal structure and so it was their job to deface it. Two of the Wall’s most well-known artists; Thierry Noir and Christopher Bouchet argued that something had to be done in order to transform the Wall’s boring appearance. They believed that it was necessary for West Berliners to carry out some kind of physical reaction against the daily burden of dealing with the Wall. However, the objective of the graffiti was not to embellish or beautify the border. Instead, graffiti artists maintained that the inexistence of graffiti would lead the GDR to believe that West Berliners accepted the Wall. Since they were unable to make the Wall disappear, they attempted to show a kind of resistance that may otherwise have been more difficult to express consistently.

*Read part two of The Berlin Canvas on February 6.