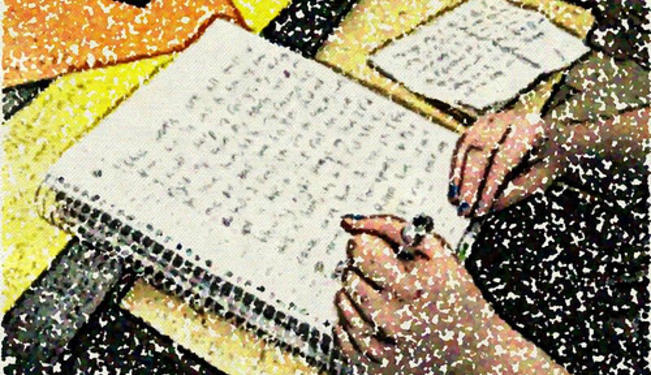 An examination of some questions generated by the controversial “Muhammad caricatures”, and wider implications for the freedom of speech.

On January 30th, the conviction of two Norwegian men on charges of terrorism against a Danish Newspaper that published the notorious “Muhammad caricatures” re-opened a five-year-old debate. Ironically, the news was timely at the University of Oxford’s launch of Free Speech Debate where a conversation with Wikipedia founder, Jimmy Wales, had earlier turned once again to the question of the Danish Cartoons. Subsequently, an op-ed article in Huffington Post derided the Wikipedia vote to introduce ‘image-filters’ for the Danish cartoons, considering the option to view the images through the click of a button as an implicit act of censorship. The article reproduced a portrait of an Arab-Muslim adolescent struggling to reconcile his wish to view the caricatures and fighting an inner battle in fear that the wrath of God may be unleashed on him. This image was upheld as a source of pity, humor and sympathy — and dare I add — condescension. As redundant as the tirade against ‘image filters’ may be in light of the bigger picture, it obliges us to revisit a controversy that resists popular amnesia for the defenders of the cartoonists, for the alleged terrorists reprehensible as they are, for free speech activists and the wider moderate Muslim population in Europe and beyond: the issue of freedom of speech.

As much as the Danish Muhammad Cartoons, five years post factum, continue to be dubbed as the “test” of free speech ideals — a yardstick for measuring one’s commitment to liberal ideals by some vanguards of the tradition — the debate, unfortunately, still lingers at the peripheries. In a world where the voices of the more powerful (and the more militant) continue to air the loudest, the principal protagonists in this debate remain the cartoonists in the name of ‘enlightenment’ and the extremist on the other end of the spectrum, issuing death threats or conducting road-rages to the chagrin of many. Swinging between these two pendulums, the actual discussion of the caricatures, the ‘moral injury’ or grievance caused to many Muslims who do not fit the mold of ‘ayotollahs,’ and the implications and consequences in a rapidly polarizing world seem oddly missing from the debate. Not least, the marginalizing impact on the religious minorities in what becomes an internationalized controversy. The essence of ‘free speech’ is to give voice; the danger, however, is when amidst a din of voices we create an environment that closes the avenues of alternative expression. Ironically, the Norwegian citizens, of Chinese-Uyghur and Iraqi-Kurdish descent respectively, convicted of terrorism serve as a case in point. Although the convicts admitted to the allegations of terrorism, they expressed their schizophrenic, personal motives. Sadek Bujak vaguely admitted entertaining the possibility of targeting Westergaard to punish him for the cartoons. Mikael David, on the other hand, insinuated his intention to target the Chinese embassy instead of Jyllands-Posten. His reason—to avenge the mistreatment of Chinese-Muslim minorities.

The Cartoons were initially published in Jyllands-Posten in September 2005, but it was not until 2006 that large protests across the board broke out in the Muslim world. Critics have pointed out the opportunistic exploitation of the cartoon controversy by Middle Eastern governments in order to bolster their own legitimacy as bastions of Islamic faith. Consequently, in September 2008, Jyllands-Posten and other Danish newspapers such as Politiken and Berlingske Tidende reprinted the ‘Bomb in the Turban’ cartoons. The newspapers claimed that the reprinting was in response to the reported arrest of three men of North African descent who were allegedly charged for plotting against the cartoonist Kurt Westergaard.

While many analysts dub the controversy as a theological grievance or a taboo caused by a depiction in an artistic form, this is not where the story ends. Indeed, Islam (more generally) does not promote artistic representation of any Prophets in order to maintain the emphasis on the interior as opposed to exterior pictorial forms. But the cartoons, like the ‘Bomb in the turban,’ are, above all, a misrepresentation and a provocation, reproducing the actions of the current day terrorists as embodied in the life of the Prophet Muhammad. As much as they are an offense to many Muslims of faith whose understandings of the life of the Prophet and the scripture remain radically opposed to those of extremist Muslims, the deep implication in identity politics is undeniable. For the militants they represent an opportunity, as much as a grievance, to rally their agendas which use the cartoons as a catalyst at best. For European Muslim minorities struggling to integrate they represent a further confirmation of a marginalized status. We must ask ourselves as we speak of free expression (or of discourse in general), with all its implications in Foucauldian power dynamics, at what point does freedom of speech become freedom to propagate hate and discrimination? And where can we draw the line between accepting the right of an individual to speak his mind (even if it instigates offense) and advocating the specific position of the speaker?

Now in the setting of a school playground where the notorious bully has conjured a malicious caricature of his fellow classmate, the consequences remain somewhat limited, assuming this is before the caricature is distributed across the school. The injured party would either cry and wail, decide to punch the bully, taking the aggression one step further, or behold the caricatures, unfazed, for what it is — a distorted portrait revealing more than anything the prejudices of the bully. But coming back to the reality of our times, an already deeply polarized world where such discourses will inevitably carry different implications for the religious minorities in Europe than for the majority Muslim countries, dare we speak of responsibility, of free speech with “robust civility,” of attempts to build bridges?

Arguably, the possibility of offense, in some form or the other, cannot be eliminated completely, neither can the ‘right to offend’ be discarded. But we have a choice. We can choose the Hobbesian view as our core premise, each in a state of warfare with another inevitably forcing us to develop thicker-skins in order to live in pluralistic societies. Conversely, we can step back from the extreme ends of the spectrum and introduce a ‘third’, seizing the apertures that still remain to pursue discourse creatively and constructively. We can remain cognizant, even as we seek to locate the concept of “civility” at the core of our discourse, that these categories, depending on how they are used, and by whom, are not immune from questions of power; that in pursuit of satire, we do not make the mistake — consciously or unconsciously — of entrenching further hatred and discrimination. That in this fierce, indiscriminate defense of language — inclusive of all distorted tropes and representations — we do not end up closing the very avenues of dialogue and alternative expression that may have existed.

Coming back to the question of ‘freedom to criticize,’ the blurred lines between insult and criticism can nonetheless be discerned by a careful eye in a case-by-case study. But now, let us up the ante of this free speech debate. By virtue of this article, we are now participating in the rules of the game. We do not call for criminalization in law of insults; we condemn the road-ragers and the death-threat givers; for those hailing the ‘right to information,’ we call for being given the option to view the caricature, but we do condemn the proliferation of stereotypes and distorted facts as an ‘educational enterprise.’ We uphold the right to be heard civilly as essential to the essence of free speech. And what about the right to criticize? What about the subliminal critique that some perceive in the Danish cartoons? The Legacy of Muhammad (considered last in the line of messengers of God) has been a tireless topic undertaken by academics and critics alike for centuries. One way to realize “robust civility” is to provide rigour, historical accuracy and methodology to our arguments. The floor is open.