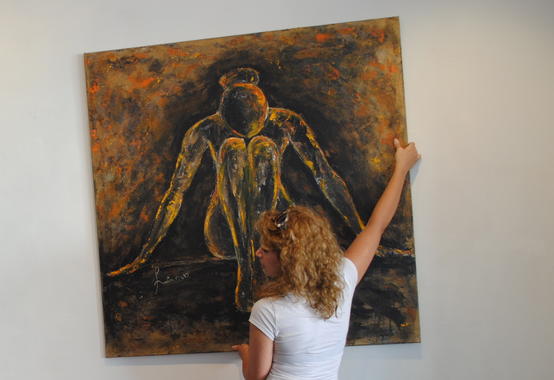 Syrian artist, Fadia Afashe gives a human face to the Syrian casualties we hear about daily in the news. Her exhibition in Los Angeles is a passionate plea and a deeply personal look at one of the most deadly conflicts in the world today. View the photo feature on her exhibition here.

Late at night on June 30, 2012, Fadia Afashe learned the terrifying details of a close relative’s arrest, interrogation, and torture at the hands of the Syrian regime. She was devastated. “He [is] like a son to me,” she said in an interview in October 2012.

In her new home in Los Angeles, thousands of miles away from her family in Damascus, Fadia did the only thing she could. She pulled out a canvas and a paintbrush. In less than two hours of frenzied painting, she had completed “Interrogation”—a painting which is now one of fourteen in her show, “I RISE.”

“Each painting is about someone I know…and [their] experiences during the revolution,” Fadia tells me as we sit outside the Levantine Cultural Center in Los Angeles, where her show is on display in the Inside/Outside Gallery until November 30, 2012. She hopes that her artwork will reach Americans, inform them about the Syrian conflict, and encourage them to help.

Fadia grapples daily with her decision to live safely in the US while her family and friends remain in danger at home, but she feels that she can speak more freely in support of the revolution here and reach a wider audience. Unfortunately, she has found that her audience may not be willing to listen.

Since Fadia moved to the US last year, she has given over 30 speeches about the Syrian revolution. “I believe in the power of people, especially in a democracy like [yours],” she says.

Sadly, she has found many Americans to be passive, uninformed, and disinterested. With the conflict now in its 20th month, she has lost much of the hopefulness she felt in the early days of the revolution and is especially disheartened by the bleak prospects for US support to the Syrian opposition.

Despite her frustration, Fadia has found inspiration among the youth of her country, who remain enthusiastic in the face of great suffering. Fadia recently learned from a young relative that among his group of 15 friends, only five are still alive. Even so, the young friends have continued to educate themselves about democracy and civil rights and have insisted that they “have two options: dignity or death.” Their passion has given Fadia the courage to show her artwork in Los Angeles despite her fear of retribution against her family in Syria. “Without [the youth] I [would] never be able to have this exhibition,” she tells me the day before the exhibition opens.

Inspired by the Syrian youth, Fadia continues to cling to hope that the revolution will succeed, and her hope is reflected in her show’s title: “I RISE.”

“I believe Syria will change the world even if all the world won’t help,” she insists, and so, if she could, she would say to her audience and to the world, “Go with this change. Help this change.”

Fadia’s final painting in her exhibition, entitled “His Soul,” depicts the soul of her husband’s 19-year-old cousin, who was tortured and died before his parents’ eyes. Fadia hopes that the painting will send her audience a vivid message: “I died for freedom. What have you done?”