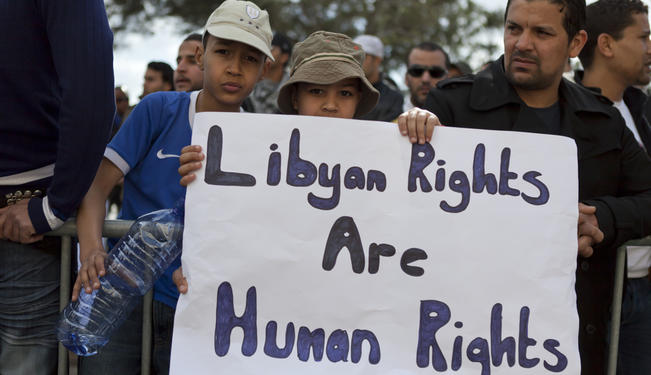 Western governments have watched with increasing perplexity as, over the course of the past year, militias stopped the bulk of Libya’s oil production, several regions were engulfed in bitter conflicts, and the political transition in Tripoli ground to a halt. Now the international community prepares for a March 6 conference in Rome to discuss how to stabilize Libya.

The picture is bleak. The government of Prime Minister Ali Zeidan has made no progress on reestablishing the security sector. Instead, local militias have strengthened their position. This allows organized crime and extremist groups to flourish.

In Benghazi, members of the army and the former security apparatus are being assassinated on a daily basis, without anyone having been held to account. The risk of insecurity in Libya spilling over into neighboring countries, or into southern Europe, is likely to grow in the coming years.

In Tripoli, the political climate is increasingly poisoned. Violence has become a routine instrument for exerting political influence, through kidnappings, attacks on media, or blockades of oilfields. While rival camps in the General National Congress (GNC) engage in endless turf wars, the political process has entered a deep crisis of legitimacy. The government has been on edge for months. Only a third of eligible voters had registered for the February 20 elections to the constituent committee, while less than half of those registered turned up. Ethnic minorities boycotted the vote.

The disinterest in the elections betrays a wider loss of confidence in the political process. Evidently, the key power struggles are not being fought in conference halls, but instead in the rivalries over the control of the security sector, borders, and oilfields. The post-revolutionary balance of power is far from settled.

The government is not an actor, but rather a stage for these power struggles. Representatives of individual cities, tribes, business networks, and different Islamist currents each control their respective ministries and public bodies. Many have ties to armed groups. The security sector is a patchwork of units representing particular political interests, and clashes are common. The boundaries between officially sanctioned militias and the army have blurred.

The Dilemma of Western Governments

Western powers had withdrawn after successfully toppling the Muammar Qadhafi regime, hoping that a Libyan-led transition would enjoy broader legitimacy and, therefore, have better prospects for success.

As Libya’s crisis deepened, calls mounted in Western capitals for stronger support to the country. But how do you support a government that isn’t one? How do you assist in rebuilding an army when it has not been decided who will control it?

The international community has no coherent answer to these questions. But that does not stop it from engaging. The US, UK and Italy have embarked on a large-scale training program. All in all, 15,000 recruits are to become soldiers. But nobody knows under whose orders they will be after having undergone training. Prime Minister Zeidan and his defense minister are wrangling with the GNC president and chief of staff over the authority to decide on force deployment.

Until now, the forces that have intervened in conflicts, upon the government’s demand or with its approval, are units that emerged out of the revolutionary armed groups of individual cities. These units can intervene because they have a political basis and clear objectives — contrary to the government.

The government does not lack trained soldiers, but the ability to take decisions and the necessary political backing to impose order. The training program will not change this.

The big topic at the upcoming conference will be initiatives for disarmament and the control of weapons and ammunition stockpiles. There is no doubt that weapons proliferation needs to be addressed urgently. However, will Western governments adopt measures that fit the realities on the ground?

No militia will hand over its arsenal to the government as long as it is not clear whose interests that government represents. A temporary solution would be to hold militias responsible for stockpiles under their control, and entice them to cooperate with the authorities. But such an approach does not lend itself to big announcements at international conferences.

Given widespread desperation over Libya, there are increasing calls for unilateral steps by Western governments. In January, the French Army’s chief of staff thought out loud about the possibility of international intervention in southern Libya. The region’s role as a jihadist sanctuary has been blown out of proportion in the French media for several months now.

But any form of external intervention would trigger broad rejection in Libya, and cause more problems than it would solve. Last October, already, the US-led abduction of al-Qaeda suspect Abu Anas al-Libi from Tripoli nearly brought down the Zeidan government.

In Libya itself, attitudes toward the role of foreign governments are often schizophrenic. Insistent pleas for greater external support to the transition alternate with the deep-rooted conviction that foreign powers are meddling in the country’s many conflicts. Discreet support in the form of advice and expertise is and remains the right approach.

The impression that foreign support is biased toward individual players or camps must be avoided. There are no quick solutions to the chaos in Libya — just some limited opportunities to support a political process that is protracted, unstable and open-ended.