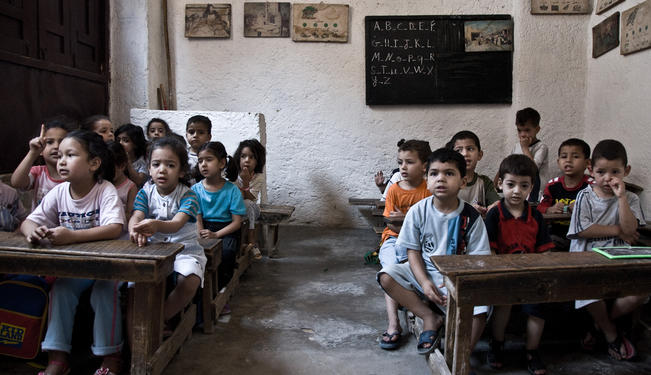 One of Morocco’s most pressing national problems is its high illiteracy rate. [Note: Read part one here.]

Moving on from part one, can we debate that the French system is only benefiting the middle- and upper-class in Morocco?

The French system generally requires students to be in the classroom approximately 30 hours a week and also demands they dedicate a considerable portion of their time to homework outside of class. The quantity of homework assigned is often difficult given the time constraints the students have, as they are in the classroom on a full-time basis.

In addition, the style of learning in the Moroccan version of the French system is largely based on rote memorization which discourages creativity and independent thinking, as students are solely focused on regurgitating facts and knowledge in order to attain passing exam scores.

Arabic is the fundamental language of instruction at the primary and secondary level. This author’s study proposes the following suggestion: Should it not be natural to utilize Arabic at the university level as a way of providing a sense of continuity and, thereby, security for the students who get thrown off with the sudden change of language?

French will remain to be the dominant language in Moroccan culture as most of society uses it for verbal and written exchange. This article does not argue that the French language should lose its prominence on the societal level, but should potentially be offered as an option at the educational university level, besides other languages, rather than having classes in just the French language.

While the Moroccan government has taken steps to modify education to suit the needs of the people, the bifurcated nature of the educational system has proven a major systemic hurdle to further progress.

In public schools throughout Morocco, Arabic is used as the primary language through the secondary level. From the university level onwards, however, French is used as the dominant language in academia. This practice presents a frustrating dilemma for Moroccan students, and even more so for the poorer women in rural Morocco.

The change in language to which Moroccan students must adjust in order to advance from one educational level to another is an unnecessary and counterproductive hurdle. While the sample size of students interviewed was small, their thoughts appear to represent the frustrations of many Moroccan students toward this divided and ineffective system.

An Akhawayn graduate student indicates that the education system is a complete “mess” and the differences in technical language between French and Arabic make it confusing and challenging for students. Their time is consumed by adjusting to the unnecessary transition from one language to another, when they could otherwise be spending this time focusing on their studies.

Meanwhile, another university student at Akhawayn suggests that Moroccans focus on their own language of Arabic and have the French language as an option as opposed to a requirement in academics. At the University of Rabat, another professor declares that implementing the French system while having only had Arabic schooling before is not effective.

Because students in the more highly educated urban centers struggle to adapt to changing linguistic environments, it is only logical that poorly educated women in rural Morocco will only struggle more. Rural women have less exposure to the French language and also do not have the privileges of urban students.

The lack of continuous streams in language through the Moroccan educational system makes it difficult for Moroccans to attain an education when they must overcome such linguistic hurdles.

To further complicate matters, the 2011 Constitution of Morocco recognized Tamazight as the second official language of the country. As many of the Tamazight speakers are from rural areas, the introduction of the largely oral Tamazight language into mainstream Moroccan society is still limited. This presents another challenge on how and to what extent Tamazight will be incorporated into the educational system.

The new government reforms help rural women gain better access to education; yet in order for these women to excel in that education and become active citizens in society, the primary language of instruction in the academic world must be continuous throughout the educational system, whether in French, Arabic or English.

Other institutional hurdles must also be eliminated to pave the way for rural women and other Moroccans to have easier access to an education. Moroccan students in their senior year of high school are currently required to take a baccalaureate exam in order to continue at university level in Morocco. Performance on this exam is supposedly meant to dictate to which particular universities a student has access.

However, there is a consensus between interviewed students and professors that this exam is unnecessary, as it does not guarantee admission to the top universities in Morocco, even with competitive scores. Furthermore, the baccalaureate exam does not accurately reflect students’ intelligence or their potential to succeed, and thus cannot give universities a reliable metric by which to judge students for admissions.

It should be recognized that the knowledge of the French language does in fact benefit working Moroccans, at a familial or societal level, given France’s colonial influence on Moroccan society. This language is only dominant in select countries across the world.

However, it is an undeniable fact that English has established itself as a universal language. Business, academia, and resources on the Internet are predominantly in English. English is such an important language to know in the professional and academic world, as the current global situation is very “Americentric.”

The world is rapidly globalizing, and many countries are trying to emulate things in America. One major factor is the educational system, which is widely recognized as one of the best in the world. In order for Moroccan students to look for higher education and professional attainment, knowing English is important while they absolutely need to be adept problem-solvers and critical thinkers — two skills that are highly valued in an American-like academic and professional world.

These skills can be learned in an American educational system, as they are emphasized in American-system schools from the day a student starts attending school. With a mastery of both the Arabic and English languages as more universities adopt an alternative to study English, Moroccan students will benefit with more opportunities to enter a rapidly globalizing world where characteristics such as freethinking is valued, something the American-based system embraces.

The American system will be less elitist than the French system, mainly because of the number of scholarships and financial aid American universities provide to qualified students who are unable to afford a private university education in Morocco or abroad.

In an economically struggling nation such as Morocco, such a benefit is vital for students who possess the intelligence and work ethic to excel at the higher level but do not enjoy the means to pay for their education. Students are able to get Fulbright scholarships to go to the best universities in the United States, and often come back to Morocco to improve their country economically.

The system instituted is a positive example of how a different educational system can and should be introduced across Morocco to engage all social classes. Thus, the benefits that will come with literacy across all levels can only be favorable.

Needless to say, however, in spite of the challenges the Moroccan government still faces within the educational system, it is taking promising steps to come to the support of women’s rights and empowerment, and is not alone in its efforts. In fact, nonprofit organizations are key allies in the fight for women’s empowerment through education.