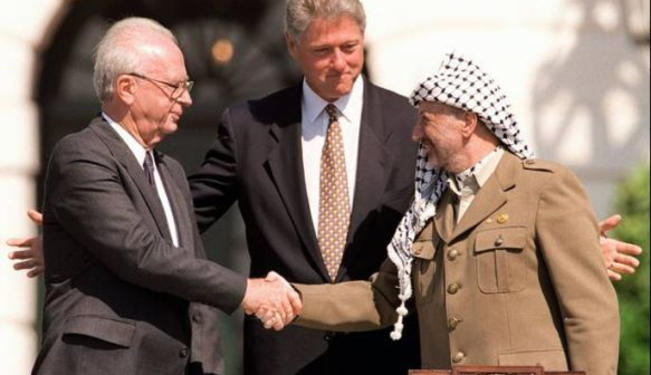 At a time where an armed conflict in the Gaza Strip is a very recent memory and future peace talks between Israelis and Palestinians are uncertain, it is pivotal to understand the history of past peace talks and agreements in order to evaluate the chances of a lasting peace settlement.

In the run-up to and after the creation of Israel in 1948, a large portion of the Palestinian population was displaced. Whether this happened by force or not remains a debate; so does the Palestinian right of return.

A crucial event was the 1967 war between Israel and several Arab states in which Israel occupied East Jerusalem, the Gaza Strip, the West Bank, the Golan Heights, and the Sinai Peninsula. In the aftermath of the war, the United Nations Security Council Resolution 242 called on Israel to withdraw from the Occupied Territories, and affirmed the necessity to achieve a “just settlement of the refugee problem”. It also introduced the “land for peace” formula. Furthermore, the Egypt-Israel peace treaty in 1979 signaled some progress with regard to an Arab-Israeli peace settlement.

The Palestine Liberation Organization (PLO), founded in 1964, emerged as an important representative of the Palestinian people. Its late leader Yasser Arafat often stressed the multi-faceted approach to liberate Palestine, including a political, diplomatic and armed struggle. In spite of its importance, the first major Palestinian uprising in the Occupied Territories, dubbed the “First Intifada”, was not initiated by the PLO leadership. During this period from 1987 until 1993, over 1,200 Palestinians and 150 Israelis were killed.

The 1991 Madrid Peace conference was an important step towards the establishment of a framework for peace talks, since for the first time both Israeli and Palestinian negotiators were present. Consequently, ensuing independent secret negotiations led to the Oslo Accords which intentionally excluded the issues of the right of return and Jewish settlements. Through this agreement the Palestinian Authority (PA) was created as a temporary self-government in the Gaza Strip and parts of the West Bank. The PLO was recognized as the legitimate representative of the Palestinian people; in turn, the PLO acknowledged Israel’s right to exist, forswore its intention to destroy Israel and the use of violence. Nevertheless, the Islamist group Hamas condemned the accords and Prime Minister Rabin was assassinated by an Israeli at a rally in support of the Oslo Accords in 1995.

Another crucial turning point was the failure of the Camp David summit in July 2000. In direct negotiations, Ehud Barak and Arafat did not reach a solution regarding the final settlement issues, the right of return and land swaps; a controversial issue was control over the Haram ash-Sharif or Temple Mount, a sacred site to both Muslims and Jews. The meeting ended after intense negotiations without an agreement. The Second Intifada, from 2000 to 2005, made any peace deal harder to attain. An Arab peace initiative led by King Abdullah of Saudi Arabia in 2002 had little resonance on the Israeli side.

Why is the Peace Process Relevant?

One year later the Middle East Quartet, comprising of the UN, EU, the US and Russia, published the Road Map plan. The goal was to end the Israeli-Palestinian conflict by 2005 with a “final and comprehensive settlement”. Three different phases prescribed an end to violence and settlement activity, the creation of a Palestinian state with provisional borders, and an international conference to deal with “final borders, the status of Jerusalem, refugees, and settlements”. In part due to ensuing violence the timeline was not realized. Israel has not fully stopped settlement construction and violence is continuing as the recent conflict in Gaza and earlier conflicts have shown.

US President Barack Obama tried to revive peace negotiations by facilitating direct talks between Israeli PM Binyamin Netanyahu and the PA’s President Mahmoud Abbas. However, after a temporary settlement construction freeze was not extended in September 2010, Abbas refused to participate in further negotiations.  As part of a separate strategy, he unsuccessfully asked the UN in September 2011 to admit Palestine, based on the pre-1967 borders, as a full member. The Palestinians were, however, successful in their UN bid to achieve non-member observer state in November 2012.

Indeed, pressing issues like the right of return, the borders of a potential Palestinian state, the status of Jerusalem, and the settlements in the West Bank remain unresolved.