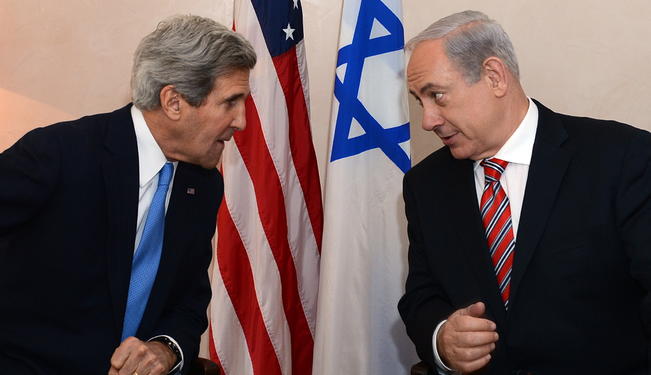 Circumstances for reaching peace are significantly more complicated than ever.

In fact, the environment today may be the worst in the entire history of the 65-year conflict, and certainly more so than the high-water mark of the 1993 Oslo Accords or even the ill-fated 2007-2008 negotiations between Israeli Prime Minister Ehud Olmert and Palestinian Authority (PA) President Mahmoud Abbas. This last attempt unsuccessfully concluded with the Fatah-Hamas split and the eventual election of Binyamin Netanyahu. Why are these negotiations for the Holy Grail of Middle East peace and stability so much more difficult today?

Shortly after taking office last year, US Secretary of State John Kerry undertook what many considered as a fool’s errand: restart Middle East peace talks between the Israelis and Palestinians. Kerry’s efforts to achieve peace now appear to be focused on getting the sides to reach a consensus on a framework agreement, which would ultimately serve as a basis for negotiating and concluding a final settlement.

Kerry's predecessor, Hillary Clinton, a strong supporter of peace in the region, had shied away from the challenge after President Barack Obama’s special Middle East envoy, former Senator George Mitchell, failed spectacularly. Following Mitchell’s resignation in May 2011, no one — with the possible exception of former UK Prime Minister and Quartet Representative Tony Blair — saw any hope or value in renewed talks, least of all Israelis, Palestinians or even the US president.

Reasons for the current problematic conditions are manifold. The first is obvious: today’s Middle East is very different from the Middle East of the last 60-odd years. Regional peace stalwarts are no longer able to lend their voice or weight to the process.

Egypt, which under Hosni Mubarak had provided strong support for Fatah and President Abbas, is wracked by internal conflict and instability; and Saudi Arabia, a passionate supporter of the Palestinian cause and a significant financial backer, is fearful of a greater nemesis — Iran. Both had been very active and generous supporters of the Palestinians.

Similarly, the rest of the region and especially the Gulf States, which had always been prepared to lend at least vocal, political and much-needed financial support, are either convulsed by internal conflict — Syria, Libya, Lebanon and Yemen — or have simply grown weary from previous fruitless efforts.

Also contributing to the changed picture is the rise of extremism and terrorism in the region. That has aggravated the region’s distraction away from Middle East peace and toward strengthening security, combating al-Qaeda, and quelling violence in Syria, the Sinai and (again) in Iraq.

The Israeli public, perceiving security threats rising in concert with the region’s instability, is increasingly skeptical of prospects for peace. According to a Pew Research Center poll published last May, only 50% of Israelis believe in the possibility of a two-state solution. Israeli interest in peace is directly tied to the region’s security environment — less security generally means less interest in peace ventures.

The external climate is not the only factor militating against Israeli-Palestinian peace. In Israel, there has been a rightward shift in politics, brought about not only by Prime Minister Netanyahu’s leadership but also by changing Israeli demographics.

Increased immigration from the non-Western diaspora, most especially the former USSR, and rising numbers of ultra-orthodox Israelis, have meant fewer Israelis disposed toward what they view as capitulation or surrender of hard-won gains in previous battles between Arabs and Israelis.

Likud, once Israel’s preeminent representative of the right, is now joined by newer conservative parties, including Naftali Bennett's Habayit Hayehudi (Jewish Home) and Avigdor Lieberman's Yisrael Beitenu (Israel Is Our Home). Each party has a significant anti-peace, pro-settler following. The mere mention of difficult issues, such as the 1967 borders or Jerusalem, could threaten the current governing coalition.

Also, the 2002-2005 Second Intifada severely affected Israeli public attitude toward peace prospects. As a result of that disastrous miscalculation by the Palestinians, many Israelis lost faith in the peace process, had their trust in the Palestinians’ desire for peace badly shaken, and consequently now believe that peace with Palestinians is not attainable — certainly not in the near- to medium-term.

Finally, Israel enters these negotiations under an existential threat unlike anything it has faced since the founding days of the Jewish state. That threat is Iran, its antipathy toward Israel, and its pursuit of nuclear weapons.

While it may be unfair to insert this seemingly exogenous factor into the Israeli-Palestinian equation — after all, Palestinians cannot be held responsible for Iran’s behavior — it cannot be ignored. Iran complicates the notion of Israel’s eastern border governed by an independent Palestinian state that might not — and, in fact, probably could not — successfully thwart subversive Hezbollah and Iranian Revolutionary Guard Corps infiltrators bent on killing Israelis and destroying the State of Israel.

If complicating changes have occurred in Israel, circumstances have not remained static on the Palestinian side. The most glaring change for Palestinians and obvious question for Israel is, who represents Palestine?

After the 2007 split between the two Palestinian factions, Fatah and Hamas — the former eschewing violence and prepared to negotiate with Israel and the latter renouncing both and sidling up to the likes of the Muslim Brotherhood in Egypt — is it unreasonable to question the efficacy of negotiations with only one side? How would an agreement reached by just one Palestinian faction be implemented over the whole of Palestine, both Gaza as well as the West Bank?

More profoundly, however, is what has not changed in Palestine. Both of its dominant parties are commanded by corrupt, ossified and opaque leaderships lacking both creative thinking and innovation when it comes to outreach to Israelis, the negotiations, and the future of a Palestinian state. Both still maintain an iron lock on Palestinian politics.

In Newsweek magazine in November 2011, Owen Mathews wrote that Turkey’s Kurdistan Workers' Party's grip on Turkish Kurds showed: "…the power that a group of well-organized revolutionaries can still exercise on a traditional, poor society with a strong martyr culture and an all-consuming sense of grievance." This is also an apt portrayal of Fatah and Hamas’ political monopoly in Palestine.

Both parties continue to play on that sense of grievance, making the same shopworn promises and holding firmly to tired positions, such as the "right of return" of Palestinians to historic Palestine, that bear little resemblance to facts on the ground.

In some ways, their thinking resembles the leadership of the Communist Party of the Soviet Union in the latter’s waning years. The Palestinian political leadership, both Fatah and Hamas, have done an exceedingly poor job of educating Palestinians about the reality of an eventual final settlement.

The Palestinian media also bear some of the blame. (Thankfully, most Palestinians follow the Israeli as well as international media and are not, therefore, clueless.) Is this the kind of enlightened and practical leadership capable of negotiating and implementing a permanent peace with Israel?

All of the aforementioned obstacles present a daunting task to the two sides’ negotiators and to Secretary Kerry and the US negotiating team. Nevertheless, as apparently insurmountable as they may be, they should not serve as an argument for turning away from pursuing peace in the Middle East. Rather, they demand that the parties and the US, as the indispensable facilitator and guarantor, engage and commit to finding a way toward a settlement.

These circumstances underscore that negotiations cannot be postponed, as has happened so many times previously, for a better day, which inevitably brings more unforeseen complications. The parties must — and must be made to — push through the seemingly most intractable issues toward agreement and final settlement.

Peace between Israelis and Palestinians as well as Arabs would not solve all of the region's problems. But it could provide a clearer lens through which to view and ultimately address those problems and set a course toward bringing stability to the Middle East. That remains the most enduring and ineluctable cry of all of those who live in this conflict-plagued region.