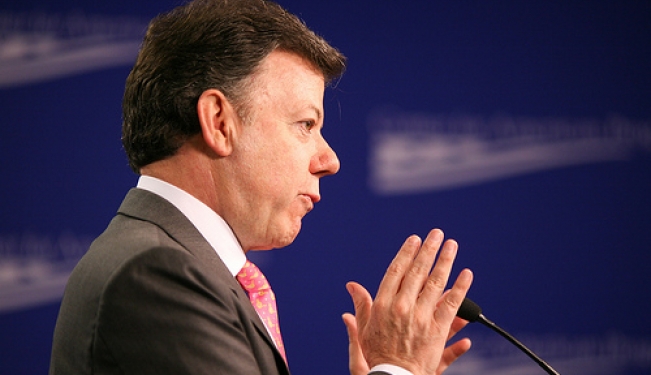 A matter of regional alignment or national interests?

President Mahmud Abbas announced his October 10th visit to Colombia as part of a set of visits to United Nations Security Council member countries, such as Bosnia and Portugal, to encourage support for Palestine´s candidature to full UN Membership and statehood. To this date, Brazil, India, Lebanon, South Africa, China, Nigeria, Gabon and Russia have pledged their full support. This leaves Palestine just one security council vote away from becoming  a full member of the UN—assuming that no permanent members (France, USA and UK) veto the initiative, and that the proposal has the support of two thirds of the General Assembly (which it already does).

Colombia is currently the only South American country that does not recognize Palestine as a state. In a recent declaration, Colombian President, Juan Manuel Santos stated that Colombia maintains the same position it has taken since the United Nations Partition Plan of Palestine in 1947 when the Palestine issue was first addressed by the Security Council in the wake of the civil war between Arabs and Jewish settlers.

The historical Colombian voting in the UNSC

Colombia was part of the Security Council in 1947-1948, at the time when the UN was deciding the outcome of British Mandatory Palestine. Colombia proposed to delay the partition and study in depth the conditions for partitioning the land in order to avoid future irreversible consequences, which inevitably did occur. Colombia abstained from voting when the Partition Plan was being debated in the General Assembly in November 1947.

As originally proposed by the UN Resolution regarding Jerusalem, Colombia has always maintained that the city and its surroundings must be internationally administered in order to prevent domination by any racial, political or religious denomination.

Colombia supports a comprehensive solution for the region wherein Israeli troops withdraw from the Occupied Territories, while Palestine recognizes the State of Israel. Colombia maintains abstention because it doesn´t see any effective commitment to peace between the parties. Colombia has always said that without a ‘peace agreement’, the creation of a Palestinian state is not sustainable given current internal conflicts among Palestinian authority, and the continued building of Israeli settlements in East Jerusalem and the Occupied Territories. In turn, the root causes of the current problem will not ameliorate with Colombia’s recognition of Palestine.

Colombia recognized Israel as a state in February 1949, and has been developing diplomatic, economic, and cultural relations with the state of Israel over the years. Since 1982, Colombia has sent soldiers to the International Task Force on the Sinai Peninsula in Egypt near Israel’s western border, to oversee the implementation of the Camp David Treaty between Israel and Egypt.

National security has been vital to both countries’ agendas and their bonds grew closer after President Uribe´s election in 2002. According to cables published by Wiki Leaks in December 2006, both countries decided to strengthen their bilateral relations after a period of tension caused by then circulating rumors of Israeli mercenaries training both guerilla and paramilitary forces in Colombia.

The Colombian army currently uses Israeli equipment such as the Galil rifle (which has been in use since the 1980s, and is now produced locally in Colombia). Colombian Special Forces are using the Tavor and the army has also bought the Israeli Neveg light machine gun to engage with counterinsurgency groups. The largest investment made by the Colombian government has been the order of 24 F-21 Kfir fighter jets (provided by the Israel Aerospace Industries as part of a 150 million USD contract). The contracts that were signed in 1989 were renewed to upgrade the planes in 2007 when the current President, Juan Manuel Santos, was Minister of Defense.

As Defense Minister, Juan Manuel Santos went on an official visit to Israel. He was received by Israeli President Shimon Peres who stated during the visit, "In the 1950s, Colombia defied international embargoes to ship weapons to the newly created Jewish state (…) in recent years the situation has come full circle, and Israel is able to repay Colombia in kind".

It is no mystery that Israel has become a major supplier of military hardware and expertise to Colombia in the last two decades. According to an internal Ministry of Defense document, roughly 38% of Colombia´s foreign defense purchases went to Israel in 2007. On the other hand, a leaked Wiki Leaks embassy cable from the former American Ambassador to Colombia reveals that economic relations between the two countries outside of defense cooperation remains relatively limited; although Santos as Defense Minister was keen to expand intelligence-sharing with the Israelis.

Autonomy or alignment with USA regarding the Palestinian request?

Colombia is regarded as a supporter of the US’ positions—for instance, it controversially supported the United States invasion to Iraq in 2003. Though the United States affirmed that it would veto the Palestinian statehood proposal in the Security Council, the proposal is only one vote short of having the nine votes necessary for it to continue to the UN General Assembly. Naturally, a lot of pressure falls on the Colombian, Bosnian, and Portuguese votes.

Colombia has been trying to play a leading role in the international landscape where it has been becoming key regional player. It has, for example, strongly supported United Nations relief efforts in Haiti. President Santos offered Colombian mediation between Israel and Palestine in his speech to the UN General Assembly last September. Colombia is trying to shed the stigma of having a foreign policy subservient to the commands of the US and which puts it in a non favorable position with regional actors and other potential allies.

However, it is important to note that Colombia has had the support of the US in its effort against drug trafficking and terrorism, and will sign a Free Trade Agreement next week after five years of negotiation. Many analysts would view the Colombian position on the Palestinian Statehood bid as an attempt to not compromise its relationship with the US, which remains one of its main military providers. Based on the Colombian government’s public declarations and Colombia´s stance on the UNSC regarding the Israeli-Palestinian case we could infer that despite its strong ties with Israel, Colombia maintains a strong stance regarding the expansion of ‘illegal’ Jewish settlements in the Occupied Territories. Nevertheless, it won´t support a recognition of Palestine that doesn´t come with a peace agreement signed by both parties. Thus, this vote is not necessarily a vote aligned with US policy, but it is the position Colombia has maintained since the issue first arose in 1947.

Is there any prospective of more effective Colombian support?

Could this be the opportunity for a change? Clearly the door is not closed as the vote has yet to be casted. It will not be the first time for Colombia to decide on issues of independence—as a Security Council member, Colombia was an important supporter of Namibia during its independence bid. Colombia recognizes and defends the right of self-determination of peoples. This is the window of opportunity for Abbas: to convince Colombia to cast a supporting vote in the Security Council. He must make himself and the international community understand that a recognition doesn´t preclude a peace dialog, as Israel has insisted.

International recognition as a state would empower Palestine to be a legitimate actor. It would make Palestine responsible for maintaining a ceasefire during dialogs; a reality that Colombia could support. Abbas must be keen to direct attention to the conceptual rights of Palestine and advocate for the support of Colombia for this end. Once the vote is cast, the details of a peace agreement can be reached by a negotiation among equals.