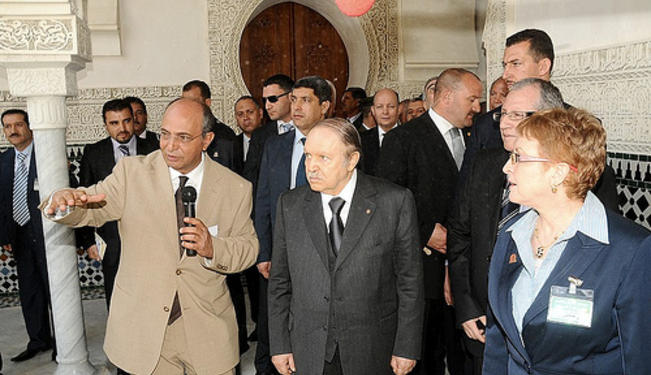 In Algeria, it seems that the existing regime, rather than the recent legislative elections, will have a final say and role in the reform of the country’s political system.

Located on the heights of Algiers, Martyrs Memorial stands tall over the city. Fashioned in the shape of three standing palm leaves, its concrete structure is a historical testament to Algeria's struggle for independence and unity. Next to the memorial is a lush forest with restaurants and a shopping centre, complementary tributes to Algeria's (economic) progress since. Taken together, they form the image of Algeria that its regime likes to project to the outside world — a beacon of freedom, stability, and progress when other countries are facing uprisings.

In reality, the first Muslim state to embark on a transition to democracy in the early 1990's is facing problems similar to those in other Arab countries – authoritarian and arbitrary rule, social injustice, and a restless and disenfranchised youth. No amount of revenue from oil exports has been able to hide the growing discontent. With its socio-economic climate deteriorating and unrest spreading through the streets in early 2011, President Abdelaziz Bouteflika seized the 2012 legislative elections as an opportunity for reform. He announced a revision of the constitution and an improvement of regulations on political parties, elections, and associations. Although members of the Algerian opposition and civil society criticized the president, political parties were cautiously optimistic that new legal provisions would guarantee a fairer, more credible, and more transparent election, and that the regime was serious about the gradual political reform that will help avert an Algerian Arab Spring.

The recent elections resulted in a splintered parliament dominated by the Front de Libération Nationale (FLN), the party that has ruled Algeria ever since its independence in 1962, and have left little hope for such reform. Call it apathy, or call it paralysis. The fact remains that the grave consequences of Algeria's first free elections in 1991 are engraved in the public’s memory. To many in Algeria, the violence of the ongoing Arab uprisings and the Islamist popular take-over is the triumph of the Algeria model. But the political elite (the opposition included) are all children of the “black decade”, the decade of civil war between Islamists and the military in the 1990s, whose brutality the country has desperately been trying to forget but has politically never been able to.

The Same Message, the Same Apathy

The regime's discourse of “responsible and gradual reform” has resonated less and less with the Algerian electorate over the last decade. The disinterest of citizens in the most recent electoral process, was reflected in an insipid campaign period and low turnout on election day, and has once again confirmed that Algeria's political class is largely unable to mobilise the electorate. In the wake of a crisis, it is not uncommon for a society to soul-search for new national identity. It is uncommon, however, for a society that has settled on such an identity a long time ago, to have its politicians conduct this exercise in perpetuum as a matter of urgency. At such a time, the state should rather be re-inventing itself to face a looming socio-economic crisis.

Rather than relying on an outdated narrative to justify its misplaced legitimacy as the heir to Algeria’s post-colonial, post-fundamentalist destiny, the challenge for the regime is to develop a discourse that addresses this crisis. In the words of a young man in one of Algiers' quartiers populaires: “We hear a message that emphasises our history and rallies around an idea of national unity, and warns for the threat of fundamentalism. All of these things are no longer an issue in Algeria. People want to know what they will do for their brother who has no job, for their parents who need medical care, [and] for their children who cannot find an apartment“.

At the same time, opposition parties have failed to rally voters around a new discourse. This is despite the fact that more parties have been competing in the 2012 legislative elections than ever before. In their defence, new parties were given hardly any time to prepare for the elections by the Ministry of Interior. In addition, they seem to suffer from a lack of expertise and resources to reach out to constituents.

Despite carrying a message of change and an (implicit) recognition of citizens' concerns, the opposition parties are battling a negative perception of parliament among voters. Particularly the youth feel that “parliament is just for raising hands”, and “that there is no real political will for change”. The boycott movement organized by the opposition party Rassemblement pour la Culture et la Démocratie(RCD) plays on such feelings but has not garnered the support necessary for making a serious impact either on the turnout or the legitimacy of a next parliament. In the mean time, the FLN and the Rassemblement National Démocratique (RND) have mobilised their base with overwhelming success.

With the FLN and the RND commanding a majority in parliament, they will most likely back constitutional reform that will further solidify the role of the elite. “We prefer a presidential system like in the United States or a semi-presidential system like in France” a member of parliament for the FLN confided in me. This does not necessarily mean that politics in Algeria will be undemocratic as many opposition parties argue. However, free and fair elections do not guarantee a democracy and neither does a parliamentary system. What is important, as political scientist Kaare Strøm has argued, is that “the choice between parliamentary and presidential government involves a choice of mechanisms designed to induce politicians to act in the public interest". In Algeria such a set of mechanisms has never developed, and in the absence of clear checks and balances, a small group, better known as “le pouvoir,” has been able to monopolise power.

Autocrats Will Never be Democrats

With the next elections scheduled for 2014, the question remains: if the radical change in discourse and government practice will not be ushered in by a revolution, through the ballot box, or by Western intervention (oil and regional stability being the main reasons), how will it come about? Traditionally, the replacement of one generation by another with new experiences and attitudes has led to socio-political change. In a speech two days before the elections, President Bouteflika said that the time of his generation had come.

In a recent article published by the Arab Center for Research and Policy Studies, Dr. Abdel Nasser Jassi outlines two scenarios that could follow: a reformist/non-revolutionary scenario that would involve the transition of political authority from the generation of the revolution to the older, second generation of Algeria. Or a second scenario, “in which we would have a transition from the first, to the young third generation which might become an alternative for the first in the event of its failure or if the first generation refuses to hand over the torch”. Jassi rightfully argues that the timing will dictate the ensuing scenario: “The longer the effectuation of political transition in Algeria lasts” the more likely a second scenario will become. “That would mean the third generation, a generation of youth and social movements, would take initiative and usurp [the] power of the first generation”, causing a rupture that many in Algeria want to avoid.

So far, political parties have betted on le pouvoir’s “political wisdom of age”. But the real political wisdom is that autocrats will never be democrats. Except for the words of an ailing president, none of the off-media political discourse indicates an imminent hand over of the torch. In the meantime, Algeria is living in its own matrix: A world in which reality is simulated in order to control and subdue mankind. We must dearly hope its citizens will not have to be woken up as roughly as in the movie.