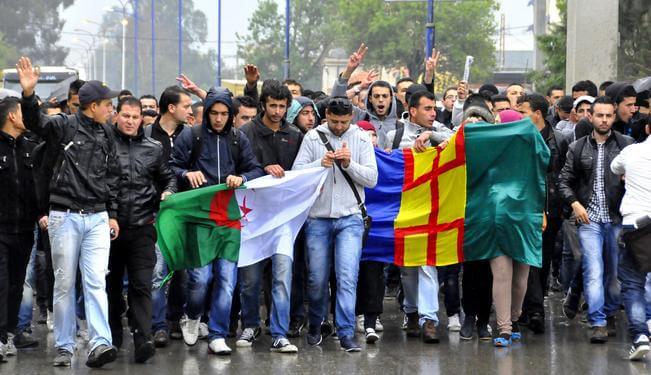 As the presidential election draws near, Algerian political activists are speaking up. [Note: Click here to view the photo feature.]

After three terms in office, starting in 1999, it seems that neither popular protests nor the political opposition’s statements could prevent the 77-year-old Bouteflika — who has difficulty with his movement and speech following a stroke in 2013 — from running for president once again. In fact, the Algerian president’s wish is to die while still in office. This was confirmed by his current campaign director and former prime minister, Abdelmalek Sellal, who stated: “Bouteflika wants to die as a mujahid (martyr) for Algeria.”

Since early March, the country’s security personnel used force in three incidents to disperse protestors, mainly supporters of the newly-born “Barakat” (Enough) Movement, which is opposed to having Bouteflika run for another five-year term.

The movement has seen its membership grow lately as the election campaign proceeds. Today, the Barakat Movement has its own “collegial organization” composed of 15 people.

On March 15, in what they called “a national meeting to sensitize young people to vote,” supporters of President Bouteflika held a large meeting in Algiers, gathering more than 5,000 people from various places around the country. During this popular meeting — organized by student organizations — officials from different groups announced they were ready to gather more than 1 million votes for Bouteflika on polling day.

At the same time in downtown Algiers, as usual, approximately 100 opponents of Bouteflika’s decision to run for a fourth term held their weekly demonstration without being disturbed by the police, in contrast to the state’s response to previously held protests.

“Enough of this election masquerade,” is the slogan used by opponents, whose numbers keep increasing on a daily basis across Algeria — especially in Berber-speaking regions such as Kabylie, Chaoui and Touareg.

Evoking this situation, an Algerian political analyst at the University of Algiers, Rachid Tlemçani, told Associated Press: “[The movement] is an alternative to the classic political parties that have failed and it makes us think of the youth behind the Arab Spring in Tunisia and Egypt.” He added: “The movement’s rough treatment by authorities [has] showed the system’s insecurity. [The government] is afraid that this movement could be a catalyst for a wider conflagration because all the ingredients for an explosion are there.”

Due to the decade-long civil war against an Islamist insurgency in the 1990s, Algeria’s population is no longer ready, nor able to accept falling back to those dark years of shedding blood. This partially explains why the Arab Spring did not manage to affect Algeria in the same way as it did in other parts of the Middle East and North Africa.

The fact now is that Bouteflika’s opponents (those against his reelection) seem to be more determined than ever, promising to strengthen their actions in the form of well-organized street protests.

The presidential election campaign that started on March 23 seems to be a race where the six candidates — just like Algerians have seen in previous election campaigns — promise the moon to the population. Algerians, however, do not seem to show real interest in those candidates’ electoral programs, as they strongly believe the polls will not be free, fair and transparent. For Algerians, the result has already been decided.

Another term for Bouteflika is likely to mean the status quo will be maintained. However, there is an imminent risk of implosion as Algerian society will no longer be as patient as they have in the past, according to analysts.

On this point, former Prime Minister Mouloud Hamrouche told two local newspapers, El Khabar and El Watan, in a recent interview: “The problem does not arise in terms of being for or against a fourth mandate. There are serious problems that will arise immediately after the presidential election, with or without a fourth term.”

Hamrouche highlighted fears that are affecting Algeria, saying: “These threats come from the risk that the system collapses.” He argued that the “system which has reached its limits and can renew itself no more, can no longer govern with coherence nor cohesion” because it ignores the national project. The former prime minister recently called on the army to “intervene and save Algeria from the impasse.”

Bouteflika’s successor, if there is one in the near future, will have to deal with many issues relating not just to politics, but also to Algeria’s social and economic environment. This involves an overwhelming system of corruption that plagues all institutions, including state companies; unemployment; a growing housing demand; and the urge to establish a non-hydrocarbon economy on which the state’s whole expenditures and programs are currently based upon, not to mention many other social problems.

For the young generation in Algeria, harm has already been done and the country has experienced social and economic failures under President Bouteflika. It remains unclear over whether election day will bring answers regarding Algeria’s future, as the real intentions of political actors remain a mystery.