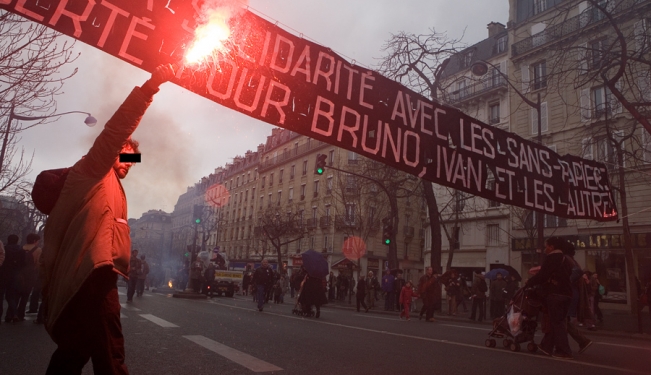 Zachary Propert argues that the French are turning anti-immigrant as a result of increased nationalism. They are refusing to adapt to globalization and burying their head in the sand. Instead, they need to embrace immigration and globalization, and all the possibilities they offer.

“Pervading nationalism imposes its dominion on man today in many different forms and with aggressiveness that spares no one. The challenge that is already with us is the temptation to accept as true freedom what in reality is only a new form of slavery.” -Pope John Paul II

On 4 June, Parisian police raided a compound outside the city believing that its residents were a part of the Kurdistan Workers’ Party (PKK). Incited by a rumor, the police acted with haste and arrested the residents. While the PKK is certainly a dubious organization, the police’s alacrity in making arrests with little evidence is in keeping with increased xenophobic acts on the part of French authorities.  Most notable of these acts has been the deportation of nearly 1,000 Romani people in 2010. These acts are indicative of deep seated prejudice among the nation’s ruling classes and are part of a long history of anti-immigration tendencies.  Nationalism can be both oppressive and obsolete, and in France this certainly seems to be true.

Despite its anti-immigration tendencies, France has long been a nation of diversity, with Moor and Roma populations living within its borders since the 9th century. However, serious immigration issues have manifested themselves since its period of decolonization in the 1960s. The first of a strong wave of immigration began in the 1950s when African and Indochinese people moved to France seeking economic prosperity, and this was followed by a second wave, between 1962 and 1973, when over one million North African people and nearly one million other pieds noirs moved from the Maghreb to France. Immigration was encouraged during this time because it provided workers for the rapidly growing economy. Moreover, nearly one million other African people decided to migrate in order to support their families in their home countries; these workers primarily emigrated from former colonies in West Africa. However, the era of French pro-immigration policies and mass influx of immigrants ended with the oil shock of 1973. From this point forward, the French legislature enacted laws that deterred immigration.

During the 1980s, both the French right and left focused heavily on immigration policy, but little happened because the numerous policies were continuously overturned, giving France the record for most legislative changes regarding immigration; legislation was overturned in 1980, 1984, 1987, and 1989. At this time while immigration rates were not as strong as during the previous two decades, immigration continued. Nevertheless, anti-immigration sentiment grew and an “immigration zéro” mentality was initiated in the early 1990s by Jean-Marie Le Pen of the Front National. The legislation most intimately linked to “immigration zéro” is the Pasqua Law of 1993. The purpose of this law was fourfold: to preclude foreign-born French university graduates from accepting jobs in France, to prolong the waiting time for family reunification from one year to two years, to nullify residency applications to non-French spouses who had resided illegally in France prior to marriage, and to criminalize illegal immigration.

However, in 1998, France chose a more liberal route to solving their immigration policy issues. Political scientist Patrick Weil, employed by Socialist Prime Minister Lionel Jospin, authored L'immigration et la nationalité, a text that decries the Pasqua law’s extreme measures, claiming that by completely restricting these workers, France loses potential citizens who can help the country to prosper economically. Reacting to this piece, the government enacted another law that allowed for foreign students and foreign scientists to work within French borders.

Since the immigration law of 1998, legislation has stagnated with both the left and the right agreeing to disagree on the subject because neither side is willing to make any more concessions. However, France has many more issues which were brought to light when the riots of November 2005 hit the streets of Paris and other cities. Immigrants living in impoverished suburbs suffering social discrimination and chronic unemployment reacted against police brutality by torching cars and public buildings.  Divisions in French society deepened as a result and anti-immigration sentiment rose.  In 2007, the Sarkozy administration created the Ministry of Immigration, Integration, National Identity and Co-development as a means to preserve French identity. This assumption is problematic considering France is diversifying more and more each year. Much like the United States and the United Kingdom, a definition of French identity seems a Quixotic exercise in the light of the fact that immigrants comprise 9% of the population and many more are second and third generation French. The idea of one French identity is antiquated and reveals antiquated chauvinistic nationalism out of sync with a new global era.

Admittedly, these issues afflict nearly every nation, but France places global immigration issues into stark light. There are two trends globally – immigration from poorer to richer countries in search of economic opportunity and reactionary efforts to prevent this immigration. Nationalism is not an answer to global immigration. It is only multinational cooperation that can succeed as every nation is increasingly absorbed into the global market.

Legendary French president Charles de Gaulle stated that “Patriotism is when love of your own people comes first; nationalism, when hate for people other than your own comes first.” In accordance with De Gaulle's words, these acts to expel immigrants from powerful nations throughout the globe do not result from patriotism but rather from nationalism because they focus on expelling immigrants who speak different languages and are not culturally assimilated. As De Gaulle stated, nationalism inculcates xenophobia within the hegemonic classes and breeds a notion that the natives are superior to minority communities. Nationalism is now the de facto ideology under which France is operating and minorities are having an increasingly hard time in that country.

Like other Western nations, France is undergoing serious demographic shifts that conservative politics and discrimination cannot quell. Immigration, in fact, is a result of an earlier era of failed nationalist policies that led to colonization.  In the process of the mission civilisatrice, hegemonic powers destroyed local economies and created dependant economies. While the great unwashed in these nations finally attained political independence, they did not quite attain economic prosperity. Hence citizens from these countries immigrate to nations such as France as a means of attaining economic stability.

Citizens of these powerful nations should not be shocked at mass immigration; on the contrary, they should anticipate it and accept it as inevitable, for these immigration trends are a judgement of globalizing activities. Clinging to old fangled notions of national identity are outdated in the modern global world. In any case, nations are figments of the imagination and codify themselves with an unreal sense of unity derived from linguistic, religious, and technological affinities. One observes this in the nationalism that drives French policy making. However, what is the way forward? For better or for worse, it seems as if the future is already evolving dialectically from the nationalism/globalization duality: multinational corporations. One must think of companies like Google and Apple that seek to unite people worldwide with their products and services. Such companies transcend borders and, like nations, embed themselves within our collective consciousness. France has to embrace the fact that globalization elides borders and that clinging to its revanchist nationalism will make it a backwater both economically and culturally. France and other nations must embrace globalization and the cosmopolitanism that it breeds.