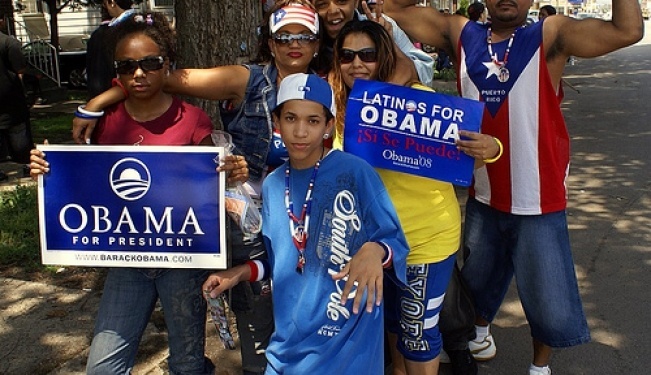 An editorial on the critical role of the United States’ Latino population in the 2012 presidential elections.

When Barack Obama burst onto the world stage during the 2004 Democratic convention, he proudly exhorted his multi-ethnic background, describing himself as “a skinny kid with a weird name… with a white mother and father from Kenya”. Fast-forward seven years and it seems the skinny kid has forsaken the significance of his weird last name. Part of the novelty and excitement of his presidential victory was due in large to the fact that he was so different and unlike any other U.S. president before him. Today, President Obama has alienated himself from those who believed in him the most, including Latino voters. Since the beginning of his administration, immigration-related deportations across the nation have risen sharply, outpacing the Bush administration's numbers to record levels.  In the 2010 fiscal year, almost 400,000 undocumented individuals have been deported. Concurrently, overall undocumented immigration has fallen sharply; however, today's faltering global economy has as much to do with this as Obama's draconian immigration tactics. How is this relevant? A simple look at our very own communities reveals how the supremely inefficient, expensive, and inhumane immigration system is tearing American families apart.

The main issue revolves around the Obama administration's Secure Communities Program (SCOMM). This is an immigration enforcement program that shares fingerprints taken by local police with federal authorities.

Potentially, an undocumented person stopped by the police over a broken headlight can legally be deported via this program. Although the proponents of the program proclaim that it only goes after 'violent' criminals, the numbers show that the majority of these 'crimes' range from petty misdemeanors to victims of domestic violence. Numerous cases reviewed by varying community organizations detail how undocumented individuals who were deported or face the process of deportation, were apprehended only because they made a call to their local authorities for protection. This not only undermines our tenets of basic human rights, but also the legitimacy of local law enforcement; if people become frightened to alert local police when they need help, a shadowy criminal underbelly may develop. The Secure Communities Program may be well intentioned, but it surely is counterproductive, inefficient, and inhumane. The other contentious aspect of it is equally as distressing. States cannot opt out of it as was once presumed; California tried but failed.  Washington in effect has strong-armed and extended Bush-era deportation tactics but has failed to take responsibility for it.

The effect of all of this is producing political ramifications that many in Washington and in state capitals across the country would rather not engage in. With so many open and widespread deportation raids taking place across the country, the Obama administration is finding it increasingly difficult to justify their implicit silence on a comprehensive immigration reform bill.  On August 15th, 2011 a large community forum took place in Los Angeles organized by an independent federal committee. The aim of the committee was to give community members an opportunity to voice their concerns over the SCOMM program. The resulting walkout of almost everyone in attendance did not go unnoticed by the local media, and within a week, similar walkout protests took place in other cities like Chicago and New York. The message of those in attendance was clear: they want a halt to all deportations immediately and a comprehensive immigration reform bill.

Perhaps it was no coincidence that only a few days later Homeland Security Secretary Janet Napolitano announced a temporary halt to mass deportations, extending the residence of primarily 'Dream Act' students, victims of serious crimes, the elderly, and individuals who have young children or are expecting. In all, Napolitano said they would review just over 300,000 cases where tenuous deportation cases were in process. The news was received with a mix of relief and skepticism within pro-immigrant rights groups.  Supporters of the indefinite deportation halt say it is a step in the right direction.  Opponents state the number of cases to be reviewed by the government is a mere drop in the bucket.  Regardless, the clear message of the announcement was that the political season for next year's presidential election had begun.

The Obama administration knows full well the support it received in '08 by the Latino vote was critical in propelling them to victory in the election, and Obama himself knows that the administration will need to rely on a similar showing from this rapidly-growing demographic if it intends to be re-elected. No longer can Obama neglect the campaign promise he made to the Latino population. Obama must take an active lead to ensure those in Congress are working toward a comprehensive reform package that includes a path to citizenship.  At stake is the legitimacy of working-class communities across the United States.  If Obama fails to make headway on this, more laws and legislation similar to those in Alabama, which criminalize undocumented immigration to the point of revoking business licenses that knowingly hire individuals without proper documentation, will spring up.  In times of economic strain, fingers tend to be pointed. In the upcoming presidential campaign the largest minority group in the country seems poised to point back.