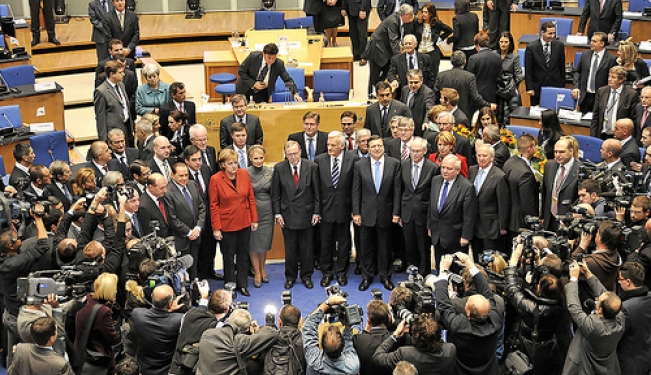 The German position with regard to intervention in Libya is marked by caution and hesitation.

They will be criticized anyhow

Scarred by the memories of being responsible for two world wars in the last century, Germany has always had serious psychological and internal problems with participating in UN peacekeeping and military missions. For decades, Germany did not participate at all, despite being one of the most important members of the European Union. However, since unification, Germany has played a more active role, deploying nearly 5,000 soldiers in Afghanistan and 7,000 worldwide.

Therefore nobody is surprised that a broad majority of Germans want an immediate withdrawal from Afghanistan – even if for the same reasons that United States President Barack Obama discussed at the end of June 2011.

Taking all of this into consideration, Germany still has a nightmare in responding to the unfolding crisis in Libya. Regardless of the decisions that the German politicians make, criticism is almost certain to follow.

Deciding on the no fly zone

On March 17, 2011, with troops loyal to Colonel Muammar Gaddafi coming closer to the rebel stronghold of Bengasi, the U.N. Security Council voted to impose a no-fly zone over Libya and permit UN members "all necessary measures" to protect civilians.

Ten Security Council members (including the United States, United Kingdom, and France) voted to approve the resolution. There were no opposing votes, but Germany, a non- permanent member of the UN Security council since Jan 1st 2011, abstained. The reason given was concern regarding a protracted military conflict, which provoked jokes about a German axis of peace.

According to the resolution, U.N. member states can "take all necessary measures to protect civilians and civilian populated areas under threat of attack in the Libyan Arab Jamahiriya, including Bengasi, while excluding a foreign occupation force."

The resolution was greeted in Bengasi with fireworks and gunfire. The Libyan opposition, devoted but untrained and under-equipped, had suffered serious setbacks. It seemed that the end of the uprising was near and a bloodbath was imminent.

When it comes to war and German involvement, the key question is a matter of ethics. In the early days of the Libyan uprising, Chancellor Merkel and Foreign Minister Westerwelle demanded that the Libyan leader step down. Berlin also quickly took measures to block Libyan accounts in Germany, thus making it more difficult for the Tripoli regime to transfer money in and out of the country.

At their summit in Brussels, European Union leaders, including Chancellor Merkel, called for Gaddafi to immediately resign. However, the German Chancellor made it clear that she was highly skeptical about a no-fly zone. Consequently, Germany abstained.

Foreign Minister Westerwelle explained, “The resolution contains significantly tougher international sanctions against the Gaddafi regime. We welcome and support this, as we ourselves had pushed in this direction. We are still very skeptical, however, about the option of a military intervention in Libya, also contained in the resolution. We see considerable risks in this. Therefore we cannot subscribe to this part of the resolution. German soldiers will not participate in a military action in Libya. The position towards the Gaddafi regime remains unchanged: the dictator must immediately stop the violence against his own people. He has to go and he must be held responsible for his crimes”.

For Germany it was a nightmarish situation. They found themselves not with their allies, but rather against them. Many Libyans were fighting to get rid of a ruthless dictator. Wasn't it the West's responsibility to support them?

Whether the international community intervened or not, civilians were going to be killed; non – intervention would probably imply a bloodbath committed by the troops loyal to Colonel Gaddafi whereas intervention would only add more weapons to the conflict.

And even if intervention prevailed, what was the exit strategy?

The German government found itself in a quandary. Peace-building experiences in Iraq and Afghanistan had produced negative, if not disastrous results. Berlin, which was participating militarily in Afghanistan but not in Iraq, decided that the risks of intervention in Libya were too great. The German public, already wanting an immediate withdrawal from Afghanistan, would not accept another military “adventure“.

The ruling conservative-liberal coalition in Berlin also had to take into consideration that a positive vote in the Security Council might hamper their chances in the then forthcoming regional elections in Bade-Wuerttemberg and Rhenania-Palatinate.

Additionally, Chancellor Merkel was opposed to the French initiative to recognize the National Transitional Council in Bengasi as the legitimate representative of the Libyan people. At the summit in Brussels, Merkel voiced her disagreement, "We cannot recognize the transitional council," she told the assembled heads of state and government. "The former justice minister is a member of this body and look at the role he played in the case of the Bulgarian nurses."

The Chancellor went on to express her reservations in supporting a no-fly zone: "What is our plan if we create a no-fly zone and it doesn't work? Do we send in ground troops? We have to think this through. Why should we intervene in Libya when we don't intervene elsewhere?"

Chancellor Merkel, as well as Foreign Minister Westerwelle, feared that the Federal Republic might be drawn into a full civil war in Libya without an exit, had Germany voted for resolution 1973.

Westerwelle explained, “The alternative to military operations is hardly inaction. After examining the repercussions of a military mission, with all of its uncertainties, which could possibly go as far as deploying ground troops and maintaining a military presence for years, I came to the following conclusion: no, we will not take part with German troops, no matter how honorable the motives of our partners who have decided differently.“

The German opposition supported the position of the federal government from the start. Not a single member of the Bundestag called for a no-fly zone.

With the resolution, the situation changed completely.

Germany’s former Foreign Minister Joschka Fischer (The Greens), who actively worked for German participation in the International Security Assistance Force (ISAF) in Afghanistan, strongly criticized the German abstention in New York. So did Germany’s former Minister of Development Heidi Wieczorek-Zeul, a leading critic of German military intervention and a member of the European Parliament, and Daniel Cohn-Bendit, of the Green Party. For Fischer, abstention was a fiasco for German foreign policy.

According to Fischer, Germany should have supported the resolution while stating that it will not participate militarily in Libya. The harsh criticism of influential German politicians dealt a blow to the Merkel-Westerwelle administration.

Similarly, public opinion leaned towards supporting the resolution. Polls indicated that a majority of Germans were in favor of a positive vote.

"In Libya, the most important thing now is to oust Gaddafi from power. While the international community agonizes over aid for refugees and new ways to increase the pressure on Gaddafi, people are dying every day, and the fear and despair of Libyans is increasing. The faster a decision is taken against Gaddafi, the better. Anyone wanting to help Libya must find a way to eliminate Gaddafi."

The center right Frankfurter Allgemeine Zeitung came to the conclusion that “the international organization acted wisely last week. After a week of UN diplomacy, Gaddafi has now received a clear message that no one in the world sees him as a brave anti-imperialist, resisting the West and offering hope to the oppressed of the Global South. Gaddafi … is isolated“.

No end in sight…

Today, nearly four months after imposing the no-fly zone, the end of Gaddafi’s regime is nowhere in sight. A stalemate between the west, mainly under Gaddafi’s control, and the east, held by the rebels, has materialized. It seems that a majority of Libyans want to get rid of Gaddafi, but the defiant colonel still has followers.

The Transitional National Council in Bengasi, which regards itself as the legitimate representative of the Libyan people, has seen diplomatic successes. France, Great Britain, Italy, Malta, Canada, Qatar and Australia have recognized the Council. German Foreign Minister Westerwelle recently traveled to Bengasi to officially open a liaison office.

For Bengasi, the question is no longer whether Gaddafi will be brought down, but what happens afterwards. France and Great Britain, the leaders of the NATO mission, want to prevent Libya from becoming an Iraq or Afghanistan on the other side of the Mediterranean. Similarly, Qatar, Turkey and the African Union have their own agenda. Even Russia and China have opened speaking channels to the Transitional National Council to further their interests.

However, while Gaddafi has been weakened and isolated, he is not yet defeated. Additionally, the latest developments in Syria and the possibility of another UN intervention have deflected Western attention from Libya. The Libyan future remains uncertain.

Germany’s nightmare is not yet over. In the aftermath of US Secretary of Defense, Gates’ accusations against NATO allies who dislike fighting and prefer digging wells, German Defense Minister De Maizière in a recent interview explained that the decision not to participate militarily was based on carefully considered reasons.  The German Minister said, “When you start something, you of course always have to know how long you can keep it up. I believe that each military operation must be analyzed to determine whether its goals can be achieved with appropriate means and within an appropriate time frame as well as how one gets out at the end. Everyone. “

These are strong arguments against European participation in Libya.  The German government’s position, despite its flaws and condemnations from home and abroad, might not necessarily be seen as the best choice. However, it may be the right one to successfully see an end to the Libyan conflict.