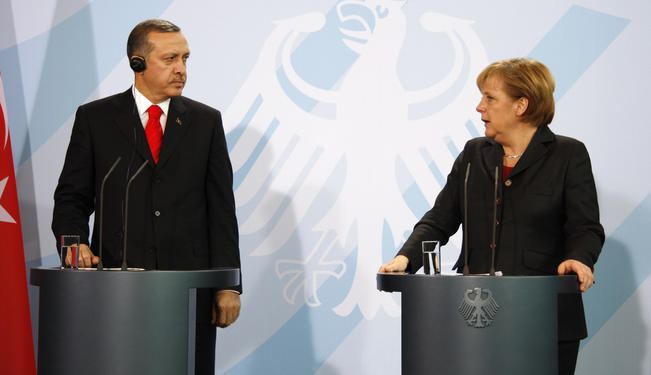 With domestic issues at play, Turkey has an eye on the EU.

Germany’s new foreign minister, Frank-Walter Steinmeier, who replaced Guido Westerwelle following the 2013 general elections, is famous for having donated one of his kidneys to his wife in 2010. His sacrifice attests a noble devotion to his beloved spouse.

As debates over Turkey’s accession to the European Union (EU) have reached new heights in the past few months, Ankara has been wondering whether the Social Democrat minister and his party will demonstrate such devotion to Turkey while Chancellor Angela Merkel’s reluctance remains unchanged.

As political tensions in Turkey are at their peak due to the ongoing struggle between the incumbent Justice and Development Party (AKP) and the Gulen movement, Ankara is in desperate need for its political climate to adopt a new direction. Indeed, the recent setback in the economy and the series of serious corruption allegations have tarnished the country’s prospects of political stability.

After its formerly strong alliance with the AKP broke down, the pro-Gulen cadres in the judiciary and police steered several large operations exposing corruption and bribery cases that embroiled cabinet ministers, as well as Prime Minister Recep Tayyip Erdogan and his son.

On the other hand, the potency of the Gulen movement in Turkey’s bureaucracy, evidenced by the unfolded telephone conversations of the movement’s leader, Fethullah Gulen, plainly indicate that Gulenists have already moved beyond the apolitical norms of a civic organization and rather turned out to have a very strong sway on politics, as well as on media and business.

While Erdogan and his supporters accuse Gulenists of forming a "parallel state" and a "secret clique," the movement underscored the corruption allegations by publicizing leaked videos and telephone calls that manifest bribery and fraud involving the government and certain businessmen.

The parties of the conflict also have major disagreements over foreign policy. Gulen, who has resided in Pennsylvania for the last 16 years, and his followers are known to have reservations toward Erdogan’s (and Foreign Minister Ahmet Davutoglu’s) very eager engagement in the Middle East’s chaotic issues.

In turn, they are accused by AKP circles of conspiring with Israel and the United States to undermine "Turkey as a rising star in the region."

Erdogan’s growing suspicions toward Washington seem to have restored Turkey’s once-lost appetite to sit at a table with Europeans.

On January 21, the Turkish PM paid an official visit to Brussels (the first one in four years) to meet with senior EU officials. A week later, Francois Hollande came to Ankara, marking the first official visit to the Turkish capital by a French president in 22 years. On February 4, Erdogan’s plane landed in Berlin, while Spanish Prime Minister Mariano Rajoy held talks with his Turkish counterpart in Ankara on February 11.

Meanwhile, Turkish and Greek Cypriot leaders, Nicos Anastasiades and Dervis Eroglu, reached an agreement in Nicosia to resume talks in Athens and Ankara, which were suspended more than a year ago.

This heavy traffic between Ankara and several European capitals is far from an ordinary occurrence, given the stagnancy of EU-Turkish relations throughout the last seven to eight years. It clearly indicates Turkey’s willingness to open a new page with Europe. However, other factors have also impacted upon this apparent resumption of relations.

In France, President Hollande is much more inclined to support Turkey’s EU bid than his predecessor, Nicolas Sarkozy.

As for Germany, although Merkel still opts for a privileged partnership with Turkey and opposes Ankara's full membership, Social Democrats are now part of the new government coalition and Foreign Minister Steinmeier favors more receptive policies toward Turkey.

Last but not least, Turkey’s new EU minister, Mevlut Cavusoglu, is the former president of the Parliamentary Assembly of the Council of Europe (PACE). His recent replacement of Egemen Bagis bodes well for refinement in relations with the EU, as Bagis was largely criticized for his flippant statements toward European leaders.

However, tangible progress would entail more substantial steps since the support of pro-Turkey politicians in Europe is not unconditional. They expect the Turkish government to embrace democratic standards such as freedom of speech, press freedom, judicial independence and the rule of law.

Besides, despite the recently resumed talks in Cyprus between the Greek and Turkish sides, the issue will probably remain unsettled for a long time. Turkish Foreign Minister Davutoglu believes the upcoming round of talks might be the very last chance for a lasting settlement in the island.

The bottom line is that Erdogan’s quest to counterbalance Washington’s potential siding with the Gulen movement has generated heightened diplomatic traffic with the EU and European countries, but it will remain difficult for his government to overcome the current constraints.