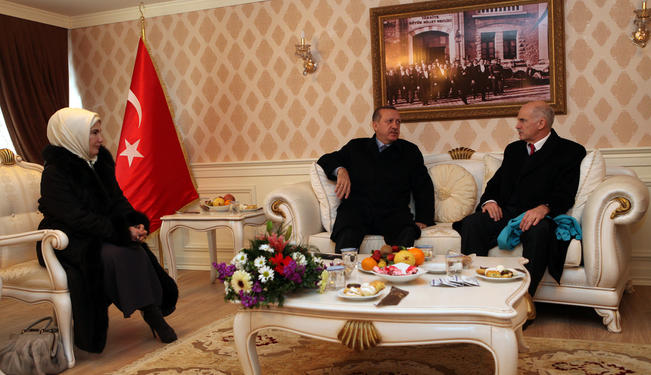 At a time when various countries in the region are going through different degrees of change, Turkey is often seen as a potential ‘regional model’ for the new Middle East. However, the suitability and replicability of the ‘Turkish model’ to other countries remains a highly debated issue.

Since the start of the Arab Uprisings, much has been written and debated on whether Turkey represents a ‘regional model’ for the post-revolutionary states of the new Middle East. Turkey is widely seen as an exception in the region; often considered a successful case of coexistence between democracy and Islam. It is also seen as the best example of what can be possibly achieved by a Muslim country embarking on the road to economic liberalisation, secularism and democracy.

However, the replicability of the Turkish model is highly questioned and it remains to be seen whether Egypt, Tunisia, or any other countries of the region are able or even willing to follow Turkey's steps.

The Western Model or the Turkish Model?

Supporters of Turkey’s ‘demonstrative effect’ argue that the country's regional charisma derives from its remarkable achievements in terms of sustained economic growth and trade expansion, democratisation and political stability. While most observers acknowledge that the Turkish democracy is still a work in progress, they also see its shortcomings as the key element that makes the Turkish model relevant for the other countries of the region. By looking at Turkey’s long-term history, they argue, the country’s improvement in terms of both democratic and economic standards is unquestioned. Turkey’s cultural affinity with the rest of the region, in addition, would make the Turkish model more acceptable to the Arab countries, rather than any Western democratic model imposed from outside.

Much of Turkey’s prestige in the region also seems to be due to its pragmatic zero-problems foreign policy. Ankara has been able to maintain friendly relations with the West while pursuing its interests with new emerging powers such as China and Russia. Moreover, they have played a leading role in regional affairs, often in open disagreement with Western governments. In handling the Iranian nuclear issue and the diplomatic crisis with Israel which followed the Gaza Flotilla raid, Turkey has shown the will to increase its influence through independent, more assertive policies, which reflect the aspiration of Ankara to become the political leader as well as the economic power of the region.

Although some Western leaders have interpreted Turkey's new foreign policy as a will to shift away from its traditional sphere of influence and pursue new interests towards the 'East', from a western perspective the Turkish model is still considered somewhat desirable: a Muslim country with a secular state, and a stable democracy with a liberal market. Its historic and cultural links to Europe, as well as its NATO membership and long-lasting aspiration to join the European Union, make Turkey a key strategic ally in the Middle East and a stable bridge to reach out to an often turbulent region.

Domestically, the new middle class of religious, conservative businessmen, those who have supported the emergence and consolidation of the Justice and Development Party (AKP), welcome the idea of Turkey as the centre of the Islamic Ummah (nation), not least from a very pragmatic economic perspective. This new class of entrepreneurs, represented by business and trade associations, is exercising increasing pressure on the government to expand Turkey’s influence into regional and new emerging markets.

Within Turkey, however, the issue is still lively debated and closely intertwined with domestic issues. While the AKP advocates Turkey's model as a regional leader and mediator to highlight the country's grandeur under the party's leadership, its opponents argue that Turkey's role is instrumentalised by the AKP to divert attention away from domestic issues. They point out that Turkey is not at all moving in the right direction when it comes to freedom of expression or respect of human rights. Before exporting its model abroad, such views argue, Turkey should focus on consolidating a pluralistic, inclusive and liberal democracy, as well as solving issues such as the Kurdish and the Armenian questions, or the Cyprus dispute. Accordingly, Arab states should seek their own models instead of following the example of Turkey’s ‘flawed’ democracy.

Turkey, the Levant and North Africa

When it comes to those directly concerned, such as the countries whose institutional and political structures are being reshaped as an effect of the Arab Uprisings, feelings towards the Turkish model appear more varied than they are usually portrayed. A survey undertaken by TESEV in 2011 showed that Turkey is seen 'somewhat favourably' across the region. However, a deeper analysis of the survey results suggests significant differences between the Levant and North Africa as well as a correlation between educational levels and favourability to the Turkish model. According to the report, more educated, higher income respondents are the most appreciative of Turkey's economic model.

Some would argue that these figures contradict the idea of Turkey as the hero of the 'Arab Street', but rather suggest that the Turkish model appeals especially to the Arab middle classes. While this objection is noteworthy, it should not be forgotten that the Arab Uprisings have proven the proactive role of the educated youth at the forefront of the 'Arab Street' protests. Significant differences are also evident by looking at the regional breakdown. North African respondents (91%) expressed appreciation for Turkey as a political model while respondents from the Levant region showed a less positive attitude (53%).

As the survey report suggests, Turkey's mild popularity in the Levant as opposed to a more positive perception in North Africa has suffered the effects of the 'Syria factor'. While Turkey's stance in favour of the Egyptian and Tunisian revolutions was immediate and without a second thought, in the cases of Libya and Syria the situation appeared more complex and consequently Turkey's attitude proved more hesitant. With the Syrian long-term ally under fire due to its violent repression of protests and reluctance to implement reforms, Ankara's cautious handling of its conflicting loyalties throughout the crisis has affected Turkey's reputation in the Levant, both among Assad's supporters and his opponents. According to many observers, the Syrian crisis has marked the end of Turkey's zero-problems foreign policy as an effect of Ankara's realisation that soft power alone might not be sufficient to play the role of regional mediator in the Middle East.

If Turkey's foreign policy has caused some frictions in the Levant, Turkey's secularism is not seen as a model to be followed light-heartedly by the new political leaders of North African countries. Although Prime Minister Recep Tayyip Erdogan's remarks during his Arab Uprisings tour highlighted the compatibility between secularism and democracy, the possibility of implementing a secular state model is still a highly debated issue within both Egyptian and Tunisian Islamist parties.

Tunisia's En-Nahda leaders have often compared themselves to Turkey's AKP, recognising themselves as a conservative, reform-minded, Islamist and moderate party. For this reason, the AKP is often seen as a political role model for Tunisia and a potential source of inspiration for En-Nahda's policies. However, the two parties are products of very dissimilar historic, institutional and political trajectories.

The AKP is an established political party with a clear structure, vision and policies. It embodies both a conservative, Muslim identity and a pro-Western – especially pro-European – agenda. The party has been able to find a synthesis between Turkish Kemalist nationalism, democratic reformism and Islamism. En-Nahda, on the other hand, is still at an early stage of its institutionalisation process, having turned into a political party only recently after being considered an anti-systemic movement under Zine El-Abideen Ben Ali's regime. En-Nahda's ideology is deep-rooted in Tunisia's history of European colonialism, and consequently anti-colonialism, while Turkey's descent from the Ottoman Empire makes the AKP distant from this political culture.

The path of Turkey's evolution from military guardianship to democratisation, with an increasingly limited role of the military in politics and a more inclusive democratic participation from the bottom up, is also seen as a potential model for the future role of the military in Egypt's democratic development. Turkey's partial or total deconstruction of the military guardianship, whose turning point is identified in the years between 2002 and 2007, has followed a path that is, once again, very specific to the national, institutional, political and socio-economic context.

Firstly, it is closely linked to the emergence of a new class of devout Muslim capitalists promoting their interests through their support for the AKP's economic agenda. Secondly, it was influenced by the European Union (EU) membership process, as the EU insisted on political liberalisation and the limitation of the military role in politics. It was also due to the fact that the Islamist-bogeyman theory was challenged by the experience of the AKP in power. This, along with the weakening of the military's traditional political allies, brought to the increasing convergence of Islamist conservatives and liberals towards the idea that certain institutional mechanisms were no longer necessary to prevent the threats of communism, Islamism and separatism.

Based on the Turkish ‘model’, it appears rather difficult, therefore, to determine whether and how the military generals in Egypt will return to the barracks, or whether Tunisia will embark on a process of secularisation, as this will ultimately depend on a combination of institutional, political, socio-economic and even intertwined external factors. These circumstances, nevertheless, are unique to each country's scenario. Turkey undoubtedly represents a successful work-in-progress towards democratisation, an inspiring example of economic development and social transformation, as well as living evidence that Islam, democracy and secularism can coexist, by setting a precedent in the region.

It is at best premature to talk about a Turkish model as such, let alone the possibility for other countries of the region to replicate it. Turkey’s achievements, whether they are considered inspiring or not, are the product of a specific historic, institutional and socio-economic trajectory that is hardly replicable elsewhere. What is most inspiring, however, is that the Turkish model, far from being perfect, is constantly adjusting, refining and redefining itself.
The views expressed in this article are the author's own and do not necessarily reflect Fair Observer’s editorial policy.