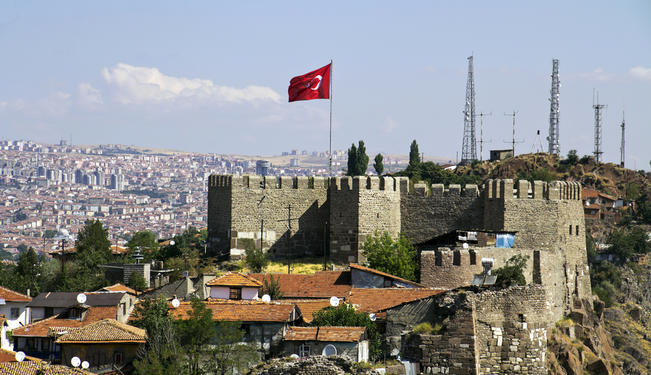 The AKP will reassert their authority at the ballot box, but they will feel the heat from the Kurdish vote.

Turkey is about to embark on a year and a half of pivotal elections — local elections in March, a presidential election in August, and general elections in June 2015. Whatever the exact share of the votes, Turks will opt for perceptions of conservative strength and reliability.

The year ahead will belong to the ruling Justice and Development Party (AKP) — particularly their pragmatic president, Abdullah Gül — and that despite some high profile protests at urban flashpoints, the gravest threat to the AKP at the ballot box will be from the pro-Kurdish Peace and Democracy Party (BDP) in the southeast.

The AKP Reveals its Appeal

From outside Turkey it appeared at times in 2013 that the AKP were the most hated party in the country. In 2014, they have the opportunity to prove to the world that they are not only a force to be reckoned with, but remain the force in Turkish politics.

What is their appeal? Firstly, they offer socially conservative, yet economically liberal policies with an Islamic flavor. Secondly, they are led by a charismatic leader – Recep Tayyip Erdoğan – as unswerving in his convictions as Mustafa Kemal Atatürk himself. And thirdly, they have ridden an economic wave.

The economic forecast may be unspectacular, but on the other two points, the AKP can still count on support. Most Turks are socially conservative and patriotic to the point of nationalism. Since the foundation of the republic as a one-party state by military men, a sense of obedience to strong men in positions of authority has been deeply engrained and widely respected.

Despite the recent turbulence, do not expect Turkey to break out into liberal politics any time soon. Steady hands matter to Turkish voters, and they will continue to show that at the elections of 2014.

The March 2009 local election results saw the AKP take 38.8% of the vote, and as this map of electoral districts in 2009 shows, the AKP have a stranglehold of rural Turkey.

The question mark is over Turkey’s top two cities: Istanbul and Ankara. These decisive population centers have remained AKP until now, but the chaotic events of 2013 will put pressure on AKP support among swing voters in these areas.

How they fare will be telling, though it should not be assumed that a mid-term slump would necessarily translate into failure at the general elections in 2015.

The two biggest names in Turkish politics right now are those of the prime minister, Erdoğan, and the US-based Islamic cleric, Fethullah Gülen. That in itself says much about the current state of Turkish politics. Despite Erdoğan’s trials in 2013, main parliamentary opposition leader Kılıçdaroğlu of the secularist CHP has still failed to make a major impression.

That the current furor around a corruption probe is ultimately the result of a battle between two Islamist leaders is also telling. Turkey has moved a long way in the past decade. This power struggle reveals the strength of Islamist politics in Turkey, as well as revealing its divisions. However, what it also reveals is how little has changed in Turkey.

Turkey is still a place in which personalities and networks of patronage matter. The most worrying thing about the current spat is that the question on everyone’s lips appears to be "who will prevail?" rather than "why are powerful individuals being allowed to manipulate public institutions?"

It makes the recent moves by Erdoğan to revisit the judicial cases in the Ergenekon and Sledgehammer investigations around attempted coup plots all the more ironic. Could it be that Erdoğan is now deciding to position himself as the military’s new best friend in a struggle with his rival, Gülen?

The quiet man of Turkish politics forms the other half of a political partnership every bit as intriguing as that of Tony Blair and Gordon Brown in the UK or Vladimir Putin and Dmitry Medvedev in Russia. Gül was a founding member of the AKP alongside Erdoğan in August 2001. Both men had been members of the Islamist Fazilet (Virtue) Party, which was banned two months prior.

Though the charismatic Erdoğan was leader of the AKP, his spell in prison for reciting a poem deemed anti-secular by the Constitutional Court meant he was ineligible to take office when the party swept to power in 2002. As a result, Gül led the first AKP government for a period of four months, before making way for Erdoğan.

Erdoğan then appointed him minister of foreign affairs until, in 2007, he nominated Gül for the presidency. Having faced down the military-judicial establishment to place an Islamist in the presidency, Erdoğan also achieved an amendment to the constitution whereby future presidents would be elected by public vote rather than parliamentary selection.

It sets up the highly likely prospect of Erdoğan once again changing seats with Gül later this year — Erdoğan becoming the first publically elected president in Turkish history, and Gül taking over leadership of the AKP (which Erdoğan must forfeit to become president). All this seems cosy enough, but the political landscape is becoming increasingly muddied.

The Gezi Park protests of 2013 revealed Erdoğan at his most politically combative and polarizing. It did not play well to the political middle ground. In contrast, Gül was notable for his measured approach to the crisis. He called for a more restrained and proportionate response from security services as well as praising the initial environmental focus of the protests.

The year 2014 will be cast as Erdoğan’s ultimate triumph, but it may appear in hindsight to be the moment of Gül’s ascension. He certainly offers the AKP a leader who is far more likely to appease the swing voter and build bridges.

It has been another rough year for Turkish foreign policy. Having risen to become the most influential soft power in the Middle East in 2010, the Arab Uprisings turned very sour for Turkey.

The AKP spent the 2000s espousing a foreign policy of "zero problems with neighbors," and the Arab Uprisings were delivering the final triumph of the so-called "Turkish model" of mild Islamism and democracy. Then it began to unravel.

Turkey has gone from a situation where it had bilateral trade deals with Syria and Iraq, was laying down nuclear deals with Iran, and grandstanding in Egypt, to one where it is an avowed enemy of the Syrian regime, at odds with the Maliki government over its engagement with the Kurdish Regional Government in Iraq, and has lost any sway in Tehran and Cairo. However, 2014 could be the moment for change.

Both the election of the pragmatic Hassan Rouhani and the nuclear deal has made Iran a potential partner in peacemaking for Turkey. Directly following the nuclear deal, Iranian and Turkish Foreign Ministers Mohammad Javad Zarif and Ahmet Davutoğlu held a joint press conference in Tehran on November 27, at which they called for a ceasefire to precede planned Syrian peace talks in Geneva.

Turkey now supports the official "Friends of Syria" line that calls for dialogue towards a negotiated settlement in the Syrian Civil War. Moreover, in a visit to Baghdad in December 2013, Energy Minister Taner Yıldız stressed Turkey’s desire to seek the central government’s consent to any oil deals between the Kurdish Regional Government and Turkey, though recent statements from Iraq show how carefully this issue must be handled.

All these shifts in policy bode well for generating a greater regional atmosphere of compromise. From appearing to be a conflict-maker, Turkey in 2014 may once more become perceived as a peacemaker, even if the shift is motivated by necessity rather than from a position of power.

It may well be that when historians look back on the Arab Spring it reveals a moment of blossoming opportunity for another ethnic group entirely. The Kurds have stood on the sidelines of the uprisings, but the 21st century has been their century so far.

The US-led war to topple Saddam Hussein finally consolidated the emergence of a de-facto Kurdish state in northern Iraq. The Syrian uprising has led to the abandonment of Kurdish regions to local control. In Turkey, the AKP has done more than previous administrations to try and bring about a political settlement to the conflict with the Kurdistan Workers' Party (PKK).

In March 2013, a potentially historic moment appeared to have been reached when imprisoned PKK leader Abdullah Öcalan declared a ceasefire in exchange for AKP commitments to deliver on constitutional and judicial amendments to protect Kurdish cultural and political rights.

As with every deal the AKP has attempted with the Kurds, it is a political tightrope. Conservative and nationalist Turks react badly to any hint of concession to the Kurds. In an election year, the mood in Ankara will be ever more cautious. This is likely to result in a strengthening of the pro-Kurdish BDP vote in the Kurdish heartlands.

In 2009, the BDP’s now-banned predecessor, the Democratic Society Party (DTP), took 29.7% of the vote in the Kurdish southeast, trailing only the AKP. This was in the year that the AKP launched the much-vaunted Kurdish Opening that was expected to propel Turkey towards a settlement of the Kurdish conflict.

In 2014, the mood is more frustrated, and the AKP could be hit hard. The BDP will run under the Peoples' Democratic Party (HDP), a new leftist umbrella party, in non-Kurdish areas, and likely to little effect. But expect that the BDP may even take the highest share of the vote in southeast Turkey this time around.