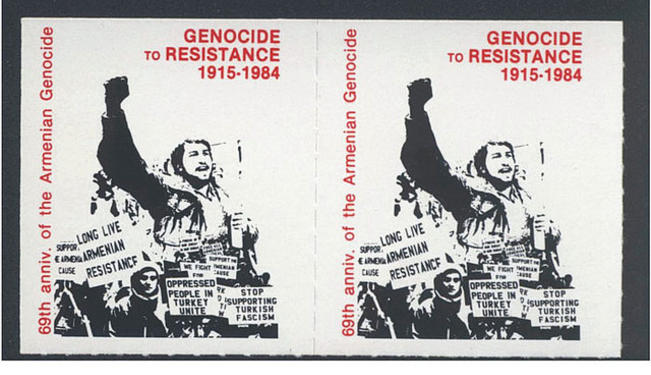 Today, close to a century later, a diplomatic row has erupted between Ankara and Paris. The cause is a proposed French law that would make denial of the Armenian Genocide a criminal offense carrying a one-year prison sentence and a $60,000 fine. Although ostensibly national legislation, it has international repercussions.

Turkey views the law as an attack on its version of history. The Turkish National Security Council stated: "If the proposal becomes law, this unjust measure will be contested in all possible ways." Turkey immediately recalled its ambassador from Paris and suspended military co-operation with France. Turkey’s prime minister, Recep Tayyip Erdoğan, called for investigations into France’s colonial past in Algeria and stated that: “The Algerians were burned en masse in ovens [and] they were martyred, mercilessly.”

Although some may dismiss this as a temporary spat, the issue is not insignificant. This incident shows Turkey beginning to exert influence as a regional power in the Mediterranean. It also shows the French ruling establishment trying to use the Armenian Genocide for electoral gain in the 2012 elections.

Historically, Turkey has had over 80 years of silence, historiography amendment, and official misinformation to reinforce its denial of the Armenian Genocide, and has thus carefully crafted a false narrative. The Armenian Genocide (1915-1923) bore the hallmarks of 20th century mass murder and was largely carried out by Turks. It was through the industrialized murder of unarmed Armenians that the blueprint of modern genocide emerged.. Adolf Hitler cited it as an example for the Final Solution: “Who, after all, speaks today of the annihilation of the Armenians?” It is a historical parallel Turkey would like forgotten.

France, however, has similar issues. Algeria’s War of Independence (1954-1962) saw many war crimes committed by French forces, involving torture and extrajudicial execution. Evidence also exists supporting extensive ethnic cleansing during and after France’s conquest of Algeria in the 19th century. The French establishment has long sought to distance itself from accusations of genocide by ignoring or distorting history through selective reinterpretation.

Therefore, the two nations are eager to forget these stains on their national discourses. Today, Turkey prosecutes those who seek to reveal the truth about the Armenian Genocide; France tries to bury the truth through official silence. Both nations perform a macabre dance of denying genocide but the question remains: What do the two nations now gain by altering the historical record?

It may seem unusual that Turkey would seek to intervene in the legal affairs of another country regarding an issue historical in nature, but implacable Turkish nationalism must be taken into account. Turkey has a long tradition of nationalism and with this comes a deep sense of pride in both nation and history. To that end, many Turks view the Armenian genocide as false, and seek to dismiss established historical facts with counter-tales. This and the belief that the international community is against them led successive Turkish governments to be openly hostile to any mention of the genocide. Indeed, the Turkish penal code (Article 301) states, "A person who publicly insults the Turkish nation…shall be punishable by imprisonment." Although this definition is deliberately vague, it is designed to prosecute anyone (such as the writer Orhan Pamuk) who questions the state’s assertion that the genocide did not take place.

Whilst Turkey’s defensive stance has long been the norm, it is now obvious that it is starting to project itself on the international stage in a more forceful and overt manner. Turkey has found its voice during the Arab Spring. It has embargoed Syria and taken part in NATO operations in Libya, emerging as a key player in the Middle East and North Africa (MENA). Consequently, Turkey is now emboldened to make its own foreign policy agenda, no longer beholden to established Western powers. In this respect it has cut off diplomatic relations with Israel over the 2010 Gaza flotilla incident and withdrawn its ambassador from Tel Aviv. Recently, Turkey has set its sights on securing its version of history by taking unprecedented action against France for the proposed legislation. By seeking to use its influence in this manner, Turkey is sending a clear signal that it will not capitulate to Western pressure when it comes to the Armenian Genocide or Turkey’s foreign policy course.

Furthermore, the cooling of Franco-Turkish relations indicates that Turkey is effectively ending its ambitions of European Union (EU) membership. For close to 50 years Turkey has aspired to join the union, but the EU has never been wholly keen on admitting a populous and overwhelmingly Muslim nation. Amongst the EU’s many conditions for Turkish entry was for an official acknowledgement of the Armenian Genocide. Yet, the long wait and the current fiscal woes of the Euro-Zone have made Turkey decide to refrain. Therefore, this diplomatic action against the legislation pertaining to the Armenian Genocide and openly threatening a key EU nation is evidence of Turkey’s new direction away from the EU. It also shows Turkey moving away from a European-facing foreign policy to one based entirely in the MENA region, demonstrating a shift in thought and a decreased worry about confrontation.

Additionally, not promoting its version of history threatens Turkey’s national security. If Turkey even tacitly acknowledges the genocide then it will also eventually have to acknowledge its crimes against the Kurdish minority. However, such an apology would be thoroughly unpalatable for Turkey, and will certainly not happen for many decades. This is a false economy in this time of the Arab Spring in the MENA region, as change will eventually come, but it explains Turkey’s recent belligerence on the Armenian issue.

On closer examination of the ruling French establishment’s motives for supporting this law, it is obvious that this is a vote-winning exercise for the ruling UMP party ahead of 2012 presidential elections. The Armenian diaspora in France numbers 400,000 people and represent crucial votes. Unsurprisingly, the law put before the French lower house of Parliament was sponsored by President Sarkozy's UMP party and is highly popular with Armenian heritage voters. It is clear that President Sarkozy is using this emotive issue to further his electoral campaign. Facing a tough re-election, the president needs all the help he can get and is willing to deeply antagonize Turkey to win.

This is a worrying use of controversial history for political needs and it implies that President Sarkozy will stop at nothing to achieve victory. The legislation has very little influence but deep historical connotations. That it is being signed into law just to further a short-term voting strategy is worrying for French politics.

However, French politics is no stranger to using history to further political ambitions. French history is today being manipulated in ways similar to that of Turkey. Recently, the ashes of General Marcel Bigeard (1916-2010) were moved to the Hôtel des Invalides. General Bigeard had, during the Algerian War of Independence, sanctioned the widespread use of torture by his soldiers. He should have been condemned by 21st century standards, not honoured.

In an editorial in Le Monde, it was argued: “This manoeuvre is dangerous, it manipulates history, but it also allows a considerable space for sickening ideas and ideologies.” President Sarkozy has begun to alter history, choosing to honour military men such as General Bigeard who were notorious for encouraging brutality. The question of why he is doing this is a simple one to answer. Faced with opposition from the right-wing Front National (FN), Sarkozy is trying to claw back votes by appearing strong on France’s military history and in his dealings with nations such as Turkey, whom the Far-Right is very hostile towards.

When the Armenians fled the killing fields of Anatolia and Syria in search of sanctuary, they found it in the land that is now Lebanon, then under French rule. Since then, psychologically speaking, the French have always sought to protect the Armenian people. This is a key reason for the large Armenian community in France.

Unlike the French population of Arab-Maghreb heritage, Armenians are very positively perceived by French politicians, press, and the public alike, and are being integrated to a far greater extent. Deep emotional ties play a part in this serious lawmaking process, with many French-Armenians, such as singer Charles Aznavour, lobbying intensely for this law. It is clear that Sarkozy is seeking to exploit the strong emotional ties the French feel towards Armenians for electoral purposes, proposing unnecessary and wholly unenforceable legislation to tempt voters to his cause.

In 2006, then French President Jacques Chirac said that whilst he supported the Armenians: "Writing history is the job of the historians, not of the laws." The law currently before the French Parliament is not in the right arena for debate on a historical issue. A Distortion of facts by either side would be unhelpful and wrong.

Turkey's diplomatic assault on France has shown its deep-seated nationalist pride and belief that as an increasingly important power in the MENA region, it has a right and a duty to secure its version of history. Nations need to make sure that Turkey does not use its foreign policy influence to exact an ersatz version of history. However, France and specifically the French political establishment should be wary of a showcase vote-winning piece of legislation because it achieves little. The ruling French party should cease to use history and controversial historical events to gain votes in this election year, as its action is as immoral as Turkey’s denial.