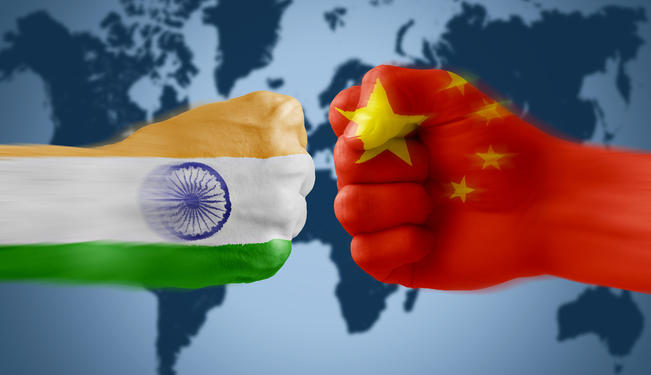 Border disputes between India and China are eclipsing a potentially strategic partnership between the two.

If history is any indication, India's failure to recognise the legitimacy of interests other than its own is a besetting flaw in its diplomacy and foreign policy. Reconciliation is the primary object of fine diplomacy and in some cases it may be difficult, if not impossible, to carry out this mandate.

At the root of India and China’s conflicting interests lies a border-dispute, and the process of negotiations between the two nations may be a rather assiduous climb. Since China deployed troops in the region of Daulat Beg Oldi in April this year, India was dragged into a politico-military imbroglio with its mighty neighbour. The dispute reached a crescendo when both countries deployed troops facing each other, ready for action on the ill-defined border. Thereafter, it took several flag meetings, in addition to an intense diplomatic flurry on either side to dial down the stress.

Yet, the abatement of tensions near the Line of Actual Control (LAC) in Ladakh came not a day too soon. In contrast, with its "idealism" and "romanticism" under Nehru that were dented by China’s consequent "betrayal" in the 1962 war between the two neighbours, the Indian government has acted more reasonably this time round. Remarkably, there was no exchange of fire between India and China even though their troops were on the brink of engagement. On the contrary, India has played a proactive role in seeking a diplomatic solution to the problem, which thankfully remains concilable.

In 1950, the Survey of India issued the first map of India as an independent country. In this map, the political divisions of the new republic were well-defined with Pakistan, both in the west and the east. They were also fairly clear with China, except in three areas where they were marked as “undefined". First, in the extreme east, the Tirap subdivision, which is present-day Arunachal Pradesh; second, the central region of what is today Uttarakhand and Himachal Pradesh; and third, the eastern Kashmir including Aksai Chin. However, in 1954, the Survey issued a new set of maps wherein the “undefined” colour wash was replaced by a hard-line depicting Aksai Chin as part of the Indian territory. Not only were the old maps withdrawn from the Survey archives, but drawing the Indian map in the old way was made illegal as well. Nehru’s speech to the Indian Parliament in 1950, after the first set of maps was published, is particularly significant in this matter:

“To admit that a lingering doubt remained in my mind and in my minister’s mind (K.M. Panikkar) as to what might happen in the future. But we did not see how we were going to decide this question by hurling it in that form at the Chinese at the moment. We felt that we should hold by our position and that the lapse of time and events will confirm it and by that time perhaps, when the challenge to it came, we would be in a much stronger position to face it. I may be perfectly frank to the House. It is not as if it was ignored or that it was not thought about.”

This speaks volumes about what Nehru’s intention was behind the unilateral act of changing the border at Aksai Chin. China was obviously not amused. When the devious act came to light, Nehru defended the new border repeatedly arguing that the McMahon Line was a treaty line, and historical evidence showed that the territories claimed in 1954 were always associated with India since ancient times. In the midst of this debacle, the then Chinese prime minister, Zhou Enlai, issued the following reply in 1959:

“First of all, I wish to point out that the Sino-Indian boundary has never been formally delimitated. Historically no treaty or agreement on the Sino-Indian boundary has ever been concluded between the Chinese Central Government and the Indian Government. So far as the actual situation is concerned, there are certain differences between the two sides over the border question… The latest case concerns an area in the southern part of China’s Sinkiang Uighur Autonomous region, which has always been under Chinese jurisdiction. Patrol duties have continually been carried out in the area by the border guards of the Chinese government. And the Sinkiang-Tibet Highway, built by our country in 1956, runs through that area. Yet recently the Indian government claimed that the area was in Indian territory. All this shows that border disputes do exist between China and India.”

The dispute became a thorn in the diplomatic ties between India and China, mainly due to the fact that the two neigbours never really sat down to discuss the issue. China’s case in 1962 centred on India’s unilateral action allowing them to justify their incursion. (This is, however, somewhat ironic when it comes to Beijing’s own claim on Tibet, especially when the communist regime has never been able to come up with a good case to justify it.) The Chinese empire was never clear about its western extremities. Further, it rejected any British attempt to demarcate the border and settle the issue once and for all.

Aksai Chin is a high-altitude uninhabited desert and of little strategic importance to India, but it is vital for China. Geographically, it becomes imperative for China to control the western border of Tibet in view of its strong claim over the disputed land. As a result, China entered the Indian territory and exploited the issue of an undefined border to its advantage. It developed the Aksai Chin road, which cut through the McMahon Line into Indian territory. Instead of negotiating the issue with its neighbour when it discovered Beijing’s advances into the territory in 1961, New Delhi plunged straight into a war only to suffer a crushing defeat at the hands of the communist regime. The indignation went deeper as India ended up losing even more ground to China.

Historically, transgressions have been made on either side. But it’s high time the two emerging world powers settled their thorny territorial disputes for their own good. At present, China’s incursion into Daulat Beg Oldi cannot be considered in isolation as it appears to be part of a larger strategic plan to strengthen its control over Tibet; hence, strengthening apprehensions over whether China will settle on anything at all. Until now, the LAC is only a notional line that has never been marked or accepted in mutually agreed maps, let alone defined in a document with specific geographical features. Nevertheless, it has been reasonably adhered to by both sides. In some parts of the LAC, however, either side has overlapping claims leading to conflicting border patrolling routines. In the past, China has on some occasions withdrawn from particular areas after an interval of time.

Even though China may seem to be dragging its feet on the border issue, there is hope that a lasting solution can be achieved under the new Chinese leadership. In a strong sign of Beijing’s willingness to warm up to its southern neighbour, Chinese President Xi Jingping described India as its "most important bilateral partner" at the Durban BRIC summit earlier this year. He further added that the working mechanism on border management between the two countries should strive for “a fair, rational solution framework acceptable to both sides as soon as possible”.

India and China are major trade partners, and each is monetarily invaluable to the other. Border transgressions and lingering territorial disputes stand to undermine a potentially strong strategic partnership between the two emerging economies. Despite China’s unquestionable militrary superiority, any showdown will inarguably hurt both neighbours and foster regional imbalance. With respect to the existing border disputes between the two, it is important to note that China has staked claims after developing the areas of Aksai Chin and Tirap, whereas India has shown no such interest in the regions.

New Delhi, in particular, needs to focus on other much more serious border issues it has with Pakistan. Its failure to resolve the dispute over Kashmir with Pakistan is far more damaging for India at national, regional and diplomatic level. India’s porous borders with both Pakistan and Bangladesh have been repeatedly exploited by terrorist outfits, and therfore, have cost it gravely. New Delhi has too much on its plate; It's time India shut the book on its border disputes with Beijing for good.