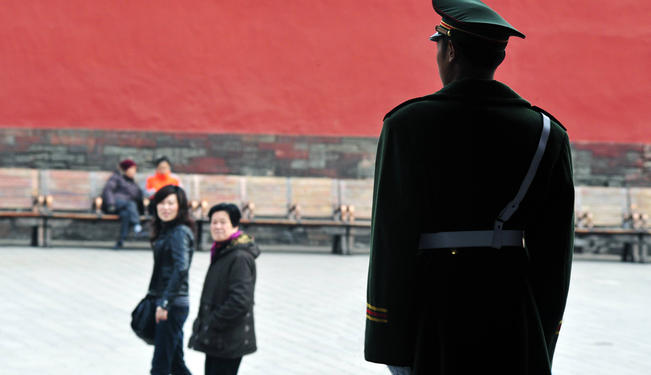 The recent border skirmish between India and China was part of long-held Chinese strategy.

On April 15, Chinese troops of about a platoon’s strength crossed the Line of Actual Control that separates India from Tibet, and penetrated ten kms into India with helicopter support and set up a frontier post. Not surprisingly, China denied the entire incident, accusing India instead of “aggressive patrolling.” The pattern is familiar, seen around China’s peripheries in its conflicts with Japan, the Philippines, Vietnam, and India.

This pattern is played out not only geographically, but also chronologically. China has always raised tensions along its border to keep other powers off-balance in their relationship with Beijing. This habit serves a dual purpose in that it also diverts its people from internal dissatisfaction. While Chinese territorial claims remain outrageous, the actual incursions on the ground are always small enough to tempt observers into arguing that the change from status quo is insignificant.

It is this seeming insignificance that is most worrisome. The Chinese leadership has mastered the art of creating small incidents at the most opportune time. The 1962 Sino-Indian War, for example, started in the midst of a very tense Cuban Missile Crisis, and the Second Taiwan Crisis in 1958 took place in the middle of US intervention in Lebanon. Chinese motives for continually stoking the tension along its borders has rarely had anything to do with actual possession of territory and more to do with creating leverage, both domestically and internationally.

One incident in this pattern, the Taiwan Straits Crisis of 1958, was orchestrated by China to signal its arrival upon the world stage. After living in the shadow of the Soviet Union under Joseph Stalin, Beijing took the opportunity of Nikita Khrushchev’s de-Stalinization to set itself up as another locus in the communist brotherhood and non-aligned world. While Beijing’s commitment to a single China may be serious, its posture over Taiwan in 1958 certainly was not. Diplomatic documents reveal that: “Chairman Mao said that the bombardment of Jinmen [Quemoy], frankly speaking, was our turn to create international tension for a purpose. We intended to teach the Americans a lesson. America had bullied us for many years, so now that we had a chance, why not give it a hard time?” In another meeting, Mao explained: “[Our bombardment] was merely aimed at testing and scaring the Americans, but we would land if circumstances allowed. Why should we not take over Jinmen-Mazu [Quemoy-Matsu] if there came an opportunity?”

This is not to imply that China had little concern over US shipment of state-of-the-art military hardware to Chiang Kai-shek from 1955 to 1958. Mao was certainly reacting to American attempts to redress the balance of power situation in Taiwan, but the bombings were merely meant as a probing of American attitudes, given that the United States had not signed a formal treaty obligating it to come to the defence of Taiwan in the case of a Chinese invasion.

A similar modus operandi is seen in another event in the pattern: the prelude to China’s invasion of India in 1962. New Delhi’s stubborn refusal to declassify diplomatic documents has made an already difficult issue controversial as well, with some scholars heaping the blame for the conflict on Jawaharlal Nehru and India. Nonetheless, China’s behaviour with India has interesting parallels with the Taiwan crisis. As Nehru saw the Himalayan Crisis, the question of a few square miles of barren wasteland was not merely a question of sovereignty or international prestige, but one of whether Chinese belligerence could be allowed to intimidate smaller, non-aligned countries, and whether they could survive free from a mantle of Chinese leadership.

Beijing carefully maintained Nehru’s faith in diplomacy throughout the 1950s and early 1960s; Chinese praise of India’s role in the Korean War, the warmth Mao showed towards Nehru, and the signing of the Panchsheel Treaty between the two Asian giants were markers of a positive relationship. Chou Enlai had explicitly stated that China had no territorial claims against India in 1951, a claim that was reiterated by other senior officials even as late as 1960. In a high-level meeting between the two countries in April 1960, Marshall Chen Yi and Chou Enlai assured India’s ambassador to Beijing, RK Nehru, that war between India and China was inconceivable. In another meeting, Chou Enlai repeated to the Indian vice president, Sarvepalli Radhakrishnan, his earlier assertion that China had no claims south of the MacMahon Line and that China had no intention of laying claim either. However, the very next day, both Chen Yi and Chou Enlai told the Indian finance minister, Morarji Desai, that they had no intention of ever accepting the McMahon Line.

As the British Foreign and Commonwealth Office noted:

“It looks as if the Chinese intended one day to challenge the McMahon Line, quite apart from the Tibetan disturbances. Otherwise why did not Chou ever let Mr. Nehru have anything in writing recognising the Line and why did[n't] the Chinese Government do anything about the maps? It seemed… that this was deliberate, that Chou’s reassurances to Mr. Nehru about the Line were purely tactical.”

There is another dimension to the Sino-Indian War that is usually overlooked in India: the contribution of Sino-Soviet rivalry. The Indian Embassy in Beijing reported back to New Delhi in late 1960 that: “In their ideological battle with the Communist Party of the Soviet Union (CPSU), India’s non-alignment had become a target for the [Chinese Communist Party].” While Chou Enlai opposed the aggressive tone of Chinese policy towards India, Liu Shaoqi pursued it relentlessly. These “leftist dogmatists” in the CCP saw Nehru not as a nationalist leader, but as a reactionary bourgeoisie. Therefore, they argued, non-alignment was just a ploy and it was only a matter of time before India joined the Western Bloc. Chinese brinkmanship in the Himalayas was, thus, meant to expose the weakness of Indian neutrality and the duplicity of Soviet peaceful coexistence, and had much less to do with Nehru’s “aggressive forward patrolling” or Tibet as many believe.

The same pattern is observed in 1965 and 1971 (albeit with some US encouragement), when China threatened the use of force against India’s “aggressive patrolling” of the border region, and in 1979 during the Third Sino-Vietnamese War, when the supposed and actual reason for the initiation of hostilities didn’t line up.

Returning to 2013, these patterns from the past are immediately visible: proclamations of the desire for peaceful coexistence; feigned anger at a supposed slight; ambiguous diplomatic positioning; and military risk-taking with the hope of usurping territory and rights undefended. Enough ink has already been spilled on how the Indian military might better defend the country’s frontiers, how India lacks a coherent China policy, and how Indians need to calm down about an incident that is more routine than one would like. However, it might also behoove policy makers to take a step back and see the larger pattern of Chinese behaviour with its neighbours: duplicity, opacity, and belligerence when they can get away with it. The recent border skirmish is not an isolated incident but fits uncomfortably well with Chinese strategy over the past few decades. India needs to consider the entirety of Chinese strategy and not restrict its response to a singular event but develop a range of options by which to undermine China’s game.

*[Note: This article originally appeared on Chaturanga and Tehelka Blog.]