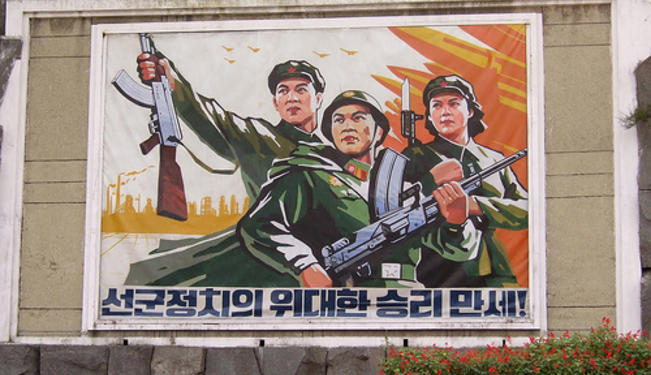 [Note: The views expressed in this article are the author’s own and do not represent those of the US Government, the Department of Defense, or the Navy.]

The passing of Kim Jong Il was a surprise. Despite the 2008 stroke, Kim Jong Il had been looking better recently and most believed he might have another year or two. But that was not the case and so begins the watching and waiting to see how the second transfer of power in the history of the Democratic People’s Republic of Korea (DPRK) transpires, this time from Kim Jong Il to his 28-year-old son Kim Jong Un.

In fall 2010, Kim Jong Il began the process of moving his son into positions of power, with the most important being Vice Chairman of the Central Military Commission in order to prepare him for succession. However, Kim Jong Un has held these positions for only a short time, and has not acquired sufficient leadership to be fully in control after his father’s passing. Instead, a collective of the party and the military will rule North Korea with extensive guidance from Kim Jong Un’s uncle, Jang Song Taek and his aunt (Kim Jong Il’s sister) Kim Kyong Hui.

When the Korean Workers’ Party announced Kim Jong Il’s death, the party made it clear that Kim Jong Un is “the great successor to the revolution” and “the eminent leader of the military and the people.” These words indicate that in name, Kim Jong Un has succeeded his father, but true power will be held by senior leaders for the time being. Some have predicted that Kim Jong Un will not be in power for long, but his lineage is an important reason to keep him as the leader of North Korea. Kim Jong Un is still the grandson of the “Great Leader” and the son of the “Dear Leader,” which counts for a lot in North Korea.

Among the many questions shared by Korean analysts is the impact Kim Jong Il’s passing may have on North Korea’s foreign policy. As with many assessments regarding North Korea, it is a difficult question to answer because the Democratic People’s Republic of Korea (DPRK) is one of the most opaque regimes in the world. Yet it appears unlikely that there will be much change in North Korea’s foreign policy positions in the short term. The North Korean leadership will be far too preoccupied with domestic matters for there to be any significant shifts or new initiatives in foreign policy in the months ahead . Moreover, given the political uncertainties, it is doubtful that any North Korean leaders will be willing to take the risk of proposing major changes to the existing foreign policy. Thus, it is too early to tell if there is any possibility that there will be even slight adjustments in DPRK’s foreign policy.

In many respects, the dynamics that have influenced North Korean foreign policy have not changed. North Korea remains in a complex strategic region and faces what it sees as a number of serious security challenges. For the moment, senior leaders in the party and military dominate decision-making and it is unlikely they will have much interest in pursuing different foreign policy directions. This includes their nuclear weapons program—even with Kim Jong Il gone, it is unlikely that the DPRK will give up its ambition to be a nuclear power. One potential wildcard is the possibility that North Korean leaders will take some type of provocative action to bolster Kim Jong Un’s national security credentials, of which he has few, or to deter adversaries that might believe North Korea is vulnerable during this uncertain time. Among the potential provocations is a ballistic missile test, a third nuclear weapons test, possibly one based on its new uranium enrichment program, or another Yeonpyeongdo-type military incident. However, North Korean leaders will likely be more reserved on this front than many analysts predict, particularly for any type of military action.

The DPRK leadership knows they are likely to face a more determined response from the South than in the past. Seoul has said it would respond forcefully to another military provocation and there is little doubt this would not be the case. There is also evidence that China has expressed strong displeasure to North Korea over past provocations, albeit far more quietly than South Korean and US leaders had wished. North Korea desperately needs to maintain good ties with China and is unlikely to risk provoking Beijing’s ire. The chief danger here is that North Korean leaders may believe that the costs of a provocative action will be outweighed by the domestic political gains in unifying the country through a challenge to South Korea and the US, an action that could be a serious miscalculation. However, it does not appear that current circumstances will push the DPRK leadership to act desperately. It is possible that North Korea might conduct short-range missile exercises, as it did prior to announcing Kim Jong Il’s death, but these would not be viewed at the same level as other more serious actions. The more interesting question is how other countries such as South Korea, the US, and China may adjust their policy toward North Korea.

With the death of Kim Jong Il, is there an opportunity to reach out to North Korea sometime in the future to probe for the possibility of even slight change in Pyongyang’s foreign policy? There are signs that Seoul and Washington are already exploring possible initiatives in this direction. The likelihood of success given the uncertainty of DPRK politics is unclear, but is worth the effort in an attempt to test the waters for greater flexibility in the future. In the end, there may be little anyone can do outside North Korea but wait patiently to see how the transition progresses.