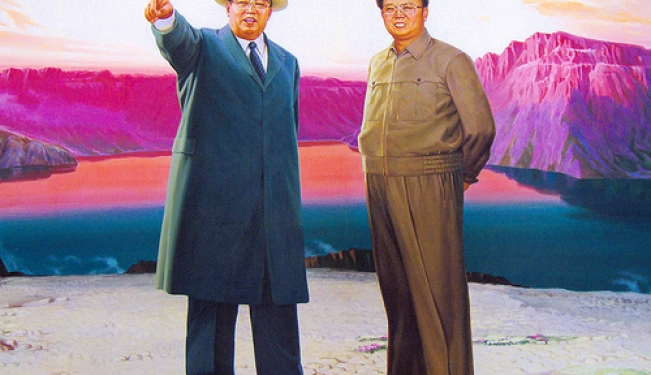 North Korea is home to one of the most hated regimes in the world. ‘Supreme Leader’ Kim Jong Il and the ruling elite surrounding him have hardly any allies and many enemies. Yet, although the regime is widely feared and hated, there are few who hope for a sudden regime change in North Korea. All major states involved in the Korean peninsula have reasons to prefer that the regime stay in power.

North Korea is without doubt one of the most infamous states in the world. The regime brutally suppresses its own people and is well-known for its disdain for any international norms and values. North Korea is illegally building and testing nuclear weapons, is highly involved in international organized crime, and launches irregular and unpredictable attacks at South Korean targets. Yet, no matter how much the regime is feared and hated by other states, almost nobody hopes for a sudden regime change in North Korea. An overview of the most involved states, which are also part of the Six Party Talks to resolve the nuclear stalemate on the Korean peninsula, illustrate the reasons for this.

South Korea is the country suffering most due to North Korean provocations; recent examples are the torpedoing of the South Korean naval ship ‘Cheonan,’ and the shelling by North Korean artillery of the small South Korean island Yeonpyeong, both of which occurred in 2010. Actually, all aggression by the Pyongyang regime is targeted at South Korea, which is considered a vassal of the United States and, as such, is suspected of planning to force a capitalistic reunification of both Koreas. Pyongyang’s nuclear weapons and massive conventional forces are especially aimed at South Korea and the United States, which is typically reflected by the rhetoric often issued from North Korea.

Nevertheless, few people in South Korea wish for a sudden regime change in Pyongyang. Every now and then Pyongyang threatens South Korea’s capital, the economically important and densely populated city of Seoul, with a nuclear Armageddon. Such an attack does not require the use of nuclear weaponry: given that Seoul is located only 60 kilometres from the border, the existing collection of conventional weapons (such as artillery and short distance missiles) is enough to destroy Seoul without much difficulty. The South Koreans will try to prevent war as much as possible. They know that despite help from the US, a war with its northern neighbors will cause too much harm to their country to be worth the risk. In regards to its southern neighbour, regime change in North Korea would prove dangerous: if current leadership felt the threat of political shift, it may attempt destroy Seoul as a last act of despair.

In the last few decades, South Korea has been focussing not on the consistent tensions with its northern neighbour, but on successfully instituting stability and economic prosperity. Regime change in the North – due to international activities or internal developments – is also seen as a threat to this stability and prosperity.

Moreover, South Korea is well aware that regime change in the North will raise another question: how to manage reunification of both countries that were involuntarily separated after the Second World War? Reunification will be the most logical step after the regime fall of the Kim family, but this will be a long-term, difficult, and expensive process. During past decades, the differences between both Koreas have increased dramatically. Considering the brainwashed population and the devastated economic, political, and cultural circumstances in the North, the costs of redeveloping the ruined country will be enormous: the RAND Corporation in 2005 estimated these costs to vary between 290 billion and 3.2 trillion US dollars. Especially younger generations in South Korea seem hardly enthusiastic to cut back on their modern, luxurious living standards in order to be able to invest in their northern neighbour. As long as North Korea is not really threatening daily life in the South, most people prefer to maintain the current status quo as opposed to addressing the challenges linked with regime change in the North.

In turn, the United States acknowledges the vulnerability of its important South Korean ally and will not easily act militarily against North Korea without consent from Seoul. Moreover, as long as the United States and its citizens are not directly targeted by North Korea, there is little reason to become militarily involved in this geopolitical hotspot, one which could potentially disturb diplomatic and economic relations with other surrounding nations.

In addition to other involved states, the US is also well aware that winning a war against North Korea is only a first step towards solving the problems in the Korean peninsula. What to do next is a far more challenging issue. Because of the lack of political opposition in the centralized system of North Korea, a removed or collapsed regime will not be easily replaced by new leaders in the short term, so anarchy and chaos may spread easily through the country (and beyond its borders). Some experts argue that North Korea could become an ungoverned territory split up between local warlords – one possibly involving biological, chemical, and nuclear weapons. Such a failed state could become an unstable hotbed for crime and terrorism, perhaps comparable to Afghanistan in the period between the Soviet withdrawal and the rise of the Taliban in the 1990s. Stabilizing North Korea would require much effort, involving the dispatch of military forces, and it would take many years.

Separated from both Koreas by the Sea of Japan, Japan shares South Korea’s sentiments and is not in favor of a war in the region that may also affect the Pacific islands; North Korea also considers Japan an American vassal state and thus a potential military target. Japan prefers to prevent any conflict and regional instability, and focuses instead on its own economic goals.

Although China is generally considered to be Kim Jong Il’s last ally, the diplomatic situation changes only superficially. Indeed, China offers the North Korean regime its last lifeline of economic and diplomatic support. Nevertheless, the Chinese leaders are often irritated by North Korean provocations that destabilize areas of Chinese interest. China is well aware that the regime in Pyongyang is an unreliable ally, which only occasionally heeds Beijing’s advice. However, this is not enough reason to severe the strategic partnership. The Chinese have two concerns regarding what will result when they end their support of North Korea – without which the regime will not last long. The first concern is that a collapse of the regime in Pyongyang will result in chaos that will affect Chinese border regions and possibly even spread further. China fears large flows of hungry refugees, destabilizing the economically important border provinces.

The second concern is geostrategic. The Chinese government considers North Korea to be a welcome zone of influence at their border. If the current North Korean regime were removed, reunification of both Koreas would be the most logical next step. This is not preferable for China, because they fear that the US sphere of influence will, in this way, expand from South Korea to North Korea, thus encircling China even further after the existing American military presence in Taiwan, Japan, South Korea, and Central Asia. All in all, it is more profitable for China to keep the situation in North Korea stable as it is now, even though it is not ideal. This is why China continues supporting the regime in Pyongyang both politically and economically.

Finally, Russia, which was an important ally of North Korea during the Soviet era, now plays only a minor role in the Korean peninsula. It has better economic ties with South Korea and Japan than with North Korea, and has little sympathy for the tension-seeking regime in Pyongyang. The reason that Russia seems to support Pyongyang in diplomatic negotiations to some extent is two-fold. First, Moscow is not in favour of American involvement in what it considers to be Russia’s area of influence. Second, Russia fears the chaos that will arise if the regime in Pyongyang were to collapse, and anticipates flows of hungry refugees over the Russian border.

As far as it is known, even the North Korean people themselves do not wish for a regime change. The few that do are mostly in forced labour camps or soon to be executed. After decades of totalitarian propaganda and brainwashing, most North Koreans seem to believe what they have been told since their childhood: that all problems they experience are caused by the enemies abroad – and that there is no country where quality of life is better than in North Korea. Within the North Korean regime, no opposition is known, thanks to the effective policy of offering the elite all the luxuries they need, therefore ensuring that any change will be to their detriment. Serious internal conflicts during the power exchange from Kim Jong Il to his son Kim Jong Un are therefore not to be expected.

In the end, it is hard to find anybody in the region who desires swift regime change in North Korea. Kim Jong Il and his comrades are well aware of this, and they know perfectly how to use this reality to their benefit. As long as the regime respects some limits, it can continue to use tension-seeking behaviour to force concessions, especially economic aid such as food and energy assistance.

Nevertheless, there is broad support for gradual regime change. Everybody hopes that the North Korean regime will at some point finally understand that their policies are not viable in the long term, but that they could gain (economically, and in international status) by slow economic reforms similar to those carried out by the communist regimes in China and Vietnam. However, this hope has been slumbering for at least the last ten years, and the first cautious experiments in North Korea have all ended shortly after their start. At the moment, there are no signs of even gradual change.

As long as all powers involved consider regime change in North Korea more risky than maintaining the current status quo situation, the elite in Pyongyang do not need to worry. As long as the North Korean leaders are able to import their luxury goods, as well as the minimally necessary requirements of food and energy for the population, they may well stay in power longer than we imagine.