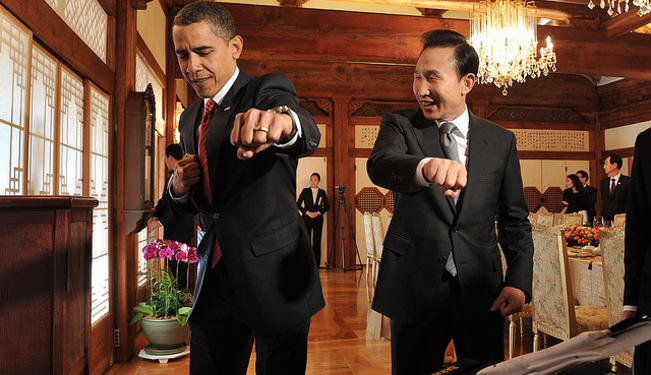 Obama' reelection may be what the US needs in a Kim Jong Un era.

In the movie Memento, the main character suffers from short-term memory loss. He cannot remember anything from day to day, so must write himself notes to explain what happened to him in the recent past. He is desperate to resolve a central mystery in his life. But with his memory a blank, all he can rely on are the cryptic scribbles that he cannot even remember writing.

Tragically, the United States is trapped in a similar pattern with North Korea. Washington is desperate to resolve the nuclear crisis. But every time a new administration takes office, it behaves like the amnesiac in the movie. The new team seems to forget what happened over the course of the previous administration. It reads the transcripts of past negotiations and the accounts of former officials as if they are notes in a different language. Faced with North Korean behavior it does not comprehend, it throws up its hands in confusion and complains that the country is a “black hole” for the intelligence community.

As a result, each administration launches its own review of North Korea policy and then proceeds to make the same rookie mistakes as its predecessors. The Clinton administration nearly went to war with Pyongyang over its nuclear program only to back up just in time to negotiate the Agreed Framework in 1994. The Bush administration came out with both barrels blazing only to turn around in its second term to negotiate in good faith with the North Koreans. And the Obama administration tried out its own version of malign neglect, which it euphemistically dubs “strategic patience,” only to realize that ignoring North Korea does not somehow make the country or its nuclear program disappear from the map. Pyongyang simply went ahead and tested a second nuclear device in 2009. Just before Kim Jong Il’s recent death, the Obama team appeared to change its mind and began to hammer out an agreement on food aid and denuclearization that promised to restart both bilateral and multilateral discussions. And so the cycle begins again.

Dictatorships like North Korea have an advantage in this regard over democracies. Whatever turmoil has surrounded the two political transitions that North Korea has experienced in its 65-year history, the country has maintained considerable continuity in both personnel and policy focusing on the West. Administrations come and go in the US, and congressional interest in North Korea waxes and wanes. But North Korea doesn’t have to deal with that kind of politics. It can develop a strategy and stick with it, if necessary for decades.

A country that has had only three leaders in its history is necessarily going to rely on this institutional memory during a transition period rather than on the specific characteristics of the leaders themselves. Indeed, Western observers looking at North Korea’s newest leader, Kim Jong Un, often fall prey to the personality fallacy. They assume that personalities matter in politics the world over, and particularly in countries with personality cults. They ask questions about Kim Jong Un’s influences, whether his Swiss education will give him a western orientation, if his youth will prompt a break with longstanding tradition. No one outside of North Korea—and most people inside that country—know very much at all about Kim Jong Un, so he can serve as a blank canvas on which we paint whatever picture we like. But it is not very likely that Kim Jong Un, whatever his personality, will steer the country in a radically different direction.

The North Korean system, more so than Western political systems or even rigidly hierarchical systems like China, enforces institutional roles for its public figures. It does not matter if Kim Jong Un took a fancy to Swiss fondue, Western sports idols, or democratic processes. He will not have the political opportunity to shape North Korean institutions to his individual predilections. He is bound by the conventions established by his grandfather Kim Il Sung and maintained by his father Kim Jong Il. He must operate within a narrow ideological space circumscribed by the nationalism that has replaced communism as the touchstone of governance. To deviate from this path would be a violation of political protocol and, more powerfully, filial devotion.

That is not to say that North Korea does not change or cannot change. But the changes fall into two categories—bottom-up transformations and collective decisions from the top down. The changes at the grassroots have included the private markets that emerged from the wreckage of the public food distribution system. Top-down changes have included the shift toward engagement with South Korea during the “sunshine era” from 1998 to 2008. But this happened not because of Kim Jong Il’s individual character but because it was a response to South Korea’s altered policy.

Rather than play the Kim Jong Un guessing game, it’s a better bet to look at North Korea’s recent foreign policy trajectory, in which the government has reached out to practically every major country except South Korea. It has essentially signed on as a subsidiary of China, Inc., pursued energy deals with Russia, and sought bilateral discussions with the US. It even began tentative discussions recently with Japan. North Korea needs to show that it is making a quantum leap in 2012 toward becoming an economically prosperous and militarily strong power (kangsong taeguk). To accomplish this goal requires foreign investment and some acknowledgement of its nuclear status (even as it trades on this status for economic benefits). Rapprochement with the US is essential not only to translate nuclear status into economic transformation but also to balance increased dependency on China. The succession of Kim Jong Un, unlike shifts in administration in the US, will likely confirm this trajectory rather than initiate a policy review and a big-picture rethink.

The challenge for North Korea is that its big year of hoped-for accomplishment coincides with elections in the US, South Korea, and Russia as well as a leadership transition in China. In other words, these countries will be preoccupied with their own domestic issues and will have less time to devote to North Korea policy. In the US in particular, the Obama administration will be rather reluctant to make any significant overtures to Pyongyang for fear of enabling its Republican opposition to play the “appeasement card.”

If Obama loses in 2012, North Korea will have to endure yet another period of amnesia in US foreign policy formulation. If the Obama team wins, however, it can maintain enough institutional continuity to learn from its early mistakes, much as the George W. Bush administration did in its second term. Only then, perhaps, might it be possible to resolve the crisis in US-North Korean relations once and for all before America’s periodic memory loss inevitably kicks in again.