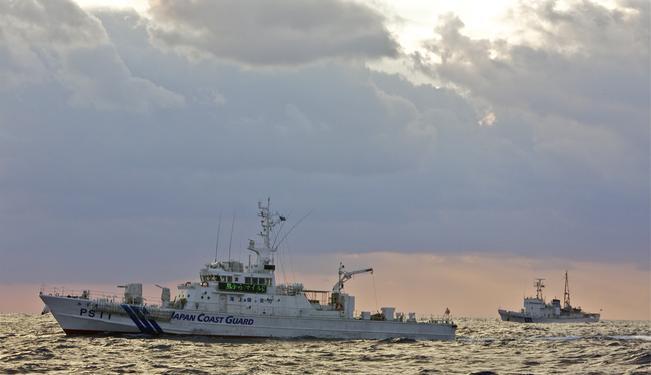 China seems to have changed its strategic approach in the territorial chess game against Japan.

On August 15, the anniversary of Japan's defeat in the Second World War, members of the Hong Kong-based Action Committee for Defending Diaoyu Islands attempted to land on the contested island chain. The activists managed to evade the Japanese coastguard and ran their ship aground near one of the islets in the island chain. Some of the crew were also able make it on to the islet with their Chinese flags held high.

It should gratify us that over the past dozen years or so, the Chinese have repeatedly managed to successfully land people on the Diaoyu Islands. What should worry us is the price that has been paid to allow for this success.

According to media reports, the activist's boat was rammed by the Japanese coastguard many times, the front of the vessel and the steering wheel were damaged. Of more concern than the damaged vessel is the fact that the 14 activists were detained by Japan's coastguard, and [at the time this commentary was published] their fate is still uncertain. (The activists were taken to Okinawa by the Japanese coastguard. They have since been deported and have all returned to Hong Kong. –Ed.)

This dispute regarding the issue of sovereignty over the Diaoyu Islands has become a test which has been placed at the feet of the Chinese government. Public attention, which had originally only been focused on these heroes defending the Diaoyu Islands, has now started to shift towards the government.

Before the government had issued an official response, rumors began to spread that China would announce "strong measures", which one would associate with the supposed "strong state" or "age of prosperity" that many assume China is entering.

There were many rumors including one that said:

"The spokesman of Ministry of National Defense of China announced that from Aug 16 to 30 at noon, our army will carry out annual planned military maneuvers in the waters close to the Diaoyu Islands. The maneuvers will cover Diaoyu Islands and its affiliated islands, and during the maneuvers, all vessels and airplanes are prohibited to pass through this area."

In fact, every time China has faced a diplomatic incident that was considered an example of "foreign humiliation," you can always count on the “Ah Q” spirit of Chinese internet users. Ah Q is a well-known character that appears in some Lu Xun novels, who is famous for "spiritual victories", a euphemism for a kind of self-deception people engage in when they're faced with extreme defeat or humiliation. Under the influence of this Ah Q spirt, Chinese internet users are able to make up rumors that help them win "spiritual victories".

Normally, these kinds of articles will always end with the line "China is playing on a grand chessboard". By using such a deep and strategic phrase, the articles seem to imply that the final result will be positive. After these diplomatic incidents pass, and the rumors are proved to be just rumors, talk of "the grand chessboard" for which people have such deeply-held expectations is also undermined by news released through official channels. It turns out this chessboard isn't so big and it's hard to make out any kind of strategy. This latest round of controversy involving the Diaoyu Islands is the same – it's hard to make head or tail of it.

In China, if you type in the phrase "Diaoyu Islands" into Google, you will get a message saying "this link has been blocked." In fact, this message has also been the consistent attitude that China has held on the Diaoyu Islands issue, that is, stifle the amount of attention that the public pays towards the issue. Among the various rumors that fly about, we're able to make out that the non-governmental groups concerned with the Diaoyu Islands have also had many restrictions placed on them.

One rumor, which is impossible to confirm, even said that at the end of September 2009, a group planned to go to Diaoyu Islands to protest, but later core members of the group were invited by officials to a high-end hotel for a meal, during which the government officials engaged in "thought work" to try and persuade the activists not to go.

The contrast between attempts to play down the issue back then and today's more up-front approach has surprised many people.

When the Hong Kong-based Action Committee for Defending Diaoyu Islands set off for the Diaoyu Islands, not only did CCTV, the most direct loudspeaker of the official government line, air a lot of coverage, China's Ministry of Foreign Affairs also changed its approach, sending a very rare direct message to Japan that "no action that will jeopardize the safety of Chinese personnel or property should be taken."

In addition, the fact that this group could make the trip also had something to do with the Hong Kong authorities giving them permission. China and Hong Kong operate according to the principle of one country-two systems, but defense and foreign policy are firmly in the grip of the Chinese government. In order to support China's silence on the Diaoyu Islands issue in the past, the Hong Kong authorities have often stopped similar groups from making the trip on grounds that they had made illegal modification to their vessels.

In this most-recent action, the Hong Kong authority has apparently received instructions to not "enforce the law strictly." From these many changes, we can be sure that China's strategy towards the Diaoyu Islands issue has changed. Let's put aside for the moment the debate about which strategy is best. No matter how it has changed, it's obvious that it is not some move on the "big chessboard" that's behind the new approach.

Because, if such a chess game is truly being played out, given that the regional strategic situation has not seen any fundamental changes recently, there is no need to change the overall strategy of the chess game. Thus, the only reasonable guess is that the chess players have changed. For a mature country, when it comes to many important issues, no matter if the people making the big decisions change, the overall strategic approach won't change much.

For example, U.S. president Obama continued on with many of the foreign policies that he inherited from his predecessor and America's attitudes to most major foreign policy issues has remained unchanged since he came to power. If Obama had just come in and made all the changes he wanted to, then the strategy pursued by his predecessors on "the grand chessboard" would have come to nothing. What will happen to the grand game of chess being played out in relation to the Diaoyu Islands?

It seems the skill of one particular player won't decide the outcome, but we should let rational forces influence the peak systemic powers. No matter how the chess game is played out in the future, in the end, a good result can only come about if we return to playing by the rules and adhering to the rule of law.

Original content by Wang Xiaoxia of Economic Observer Online on August 17, 2012. Translated by Zhu Na. Made available to Fair Observer by the generosity of our partner site Dongxi.