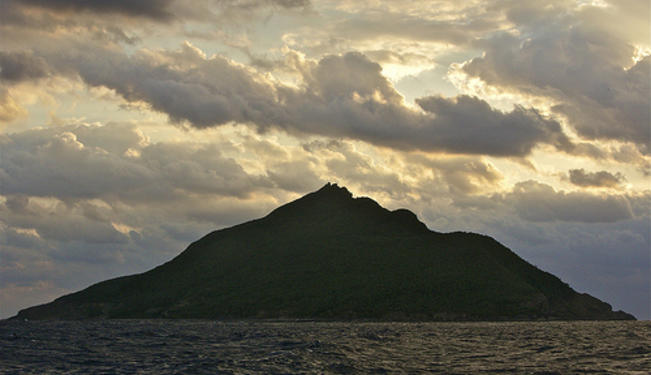 The Japanese name for the Diaoyu Islands is Senkaku, or “Pinnacled Pavilions,” which sounds far more fitting for a sitcom setting than for an international flashpoint. Yet flashpoints they are – a cluster of uninhabited islets and rocks jutting from the East China Sea, over which China and Japan are once again drifting towards war.

This latest round of confrontations, which began in 2012 and has since become a steady stream of saber rattling on both sides, poses potentially disastrous consequences for the region. With Chinese and Japanese military assets patrolling the islands, three of the world’s largest economies are one provocation or accident from a shooting war, since the United States is obliged by treaty to aid Japan. Earlier this year, former US Secretary of State Hillary Clinton assuredthe Japanese of America’s support and commitment, warning unnamed actors against “unilateral actions… to undermine Japanese administration [over the islands].”

While this is not the first time the islands have been a focus of conflict, the intensity and willingness on the Chinese side to escalate, from quietly encouraging anti-Japanese riots to deploying military patrol boats, and now the alleged use of fire-control radar to target Japanese craft, is unprecedented. The Chinese authorities, if perhaps not willing to bite, no longer seem willing to settle for mere barking, and the domestic pressures that favor escalation – particularly within Chinese media and society – will continue to drive future behavior.

To many outside observers, China is the clear aggressor; after all, they’re trying to assert control over Japanese-owned territory. According to the Chinese, however, the current crisis is the result of Japanese provocation. On September 10, 2012, Noda Yoshihiko, then Prime Minister of Japan, announced the nationalization of three of the islands. This move aimed to block Ishihara Shintaro, the hardline former Governor of Tokyo who planned to purchase the islands. But given the historically fraught Sino-Japanese relationship, it is difficult to imagine a more spectacularly inflammatory timing for the announcement, coming just one week before the anniversary of the Manchurian Incident, when Japanese officers staged a bombing by “Chinese dissidents” near Mukden (modern Shenyang) to justify the invasion of northeastern China.

Chinese reaction to the announcement was swift, angry, and eventually violent. While diplomatic protests and patrol boats were launched to “guard” the islands, demonstrationsin major cities across the country turned violent, and riot police had to be brought in – but not before Japanese shops and factories were torched or forced to close. While this violence hasn’t reoccurred, Chinese authorities have since actively protected their claim to the islands with even more patrol boats and aircraft, coming within three miles of the islands and repeatedly encountering Japanese crafton similar patrols.

Tough rhetoric has accompanied these escalations. Xi Jinping, who assumed leadership of China in November, declared in a speech on foreign policy that the islands were a “core interest” over which the “Chinese people” could not be expected to retreat. The media, especially online, animatedly notes Japanese provocations and speaks of preparing for war. Of course, there is nothing better for bolstering a new leadership, especially one that lacks democratic legitimacy, than some full-throated nationalism. Yet, though authoritative statements make the Chinese leadership sound in control of societal sentiment, the true picture is far more complex.

We the Revanchist People

Foreign observers have offered varied interpretations of the relationship between Chinese nationalism and the authorities. One explanation suggests that nationalism, particularly the militant variety, is a stick wielded pragmatically by the Party and government. Tolerated when the state is on an even keel, it can be whipped up to exert pressure or provide a distraction, and then reined in at the end of each crisis.

However, while this might have been more accurate in 2008, amidst a booming economy and stable leadership, the current conflict has come at a time when the government is under unusual scrutiny. Political transitions are always excitable periods, even in democratic societies, but China’s most recent transition produced a number of dramatic moments – not the least of which was the sudden fall of Bo Xilai, once a contender for the top post.

The legitimacy of China’s government, in the absence of elections, depends on other methods of sensing and reacting to social pressures. For instance, the Communist Party’s primary narrative, wherein it rescues China from foreign powers and leads it to greatness, depends heavily on economic growth. But economic growth has been slowing due to the global financial crisis and income inequality has been increasing for years. At the same time, increasing awareness of the environmental and social cost of China’s economic rise, as well as persistent corruption among government officials, has formed a reservoir of discontent. These internal pressures, built up in an environment with limited means of political expression, have begun to explode in the form of nationalist fervor; in effect, as the economic route loses its luster, society started to look for more direct methods of asserting China’s greatness.

Last September’s riots hinted at the possibility that the government’s control over China’s militant nationalist sentiments had begun to erode. During the previous Diaoyu crisis in 2010, when a Chinese fishing trawler collided with a Japanese Coast Guard vessel, the Chinese crew was arrested and detained. This, on the surface, appears an even greater cause for conflict; indeed, large protests were held at Japanese embassies. Eventually, however, under diplomatic pressure, Japan released the fishermen and pressed no charges.Nationalism might have reared its head, but the solution was peaceful and pragmatic.

Rocks and the Deep Blue Sea

Seen in this light, the Chinese readiness to escalate in this instance stems not from inherent aggression or arrogance, but rather from insecurity. While private nationalist groups are nothing new in China  – different “Diaoyu Protection Societies” have existed in China since the 1990s – their ire increasingly targets their own government, for failing to both solve problems at home and exercise power abroad. China’s actions might alarm outside observers, but a frequent complaint among Chinese netizens is that they are inadequate and the Party, ultimately, plays to the home crowd.

Such circumstances are not new in the history of Chinese revanchism; the Boxer Rebellion of 1900, for example, was as much against the ruling Manchu government as it was against the foreigners that the court could not resist. The current government is still a long way from being as inept and fractured as the late Qing regime, but the internet allows complaints to spread more freely, to the extent that government spokespersons have had to respond to calls in the media to “have at [Japan] over the Diaoyu islands” (original in Chinese).

Now, several months into the crisis, the nationalist stance appears to have crystallized around some watchwords in the media and commentariat. “Proactive” is one, as is “initiative”; China, they argue, has only reacted to Japanese aggression, and should begin to seize the initiative. Compared to this, Xi’s line on “core interests” sounds positively cautious. Recent Chinese actions, such as the frequent patrols around the isles and the fire control radar incident, can be seen as a way to square the circle – the actions stop short of warmongering, but they are far more provocative than what has been done before, satisfying a national appetite.

In being proactive and assertive over the issue of the Diaoyu Islands, China’s new leadership is in turn reacting to pressures at home that cannot be ignored. The islands have become a focal point of a difficult-to-control revanchism, with roots in Chinese history and current status of the country, but placating those at home means running risks abroad. More even-handed commentators in China have noted the backlash on both economies should there be even a limited, small-scale conflict. Given the government’s actions, their calculation appears to be that it is better to do something than to appear weak and adrift. But continued provocation with no effort at resolution will also cast China adrift, and the destination is much more dire.