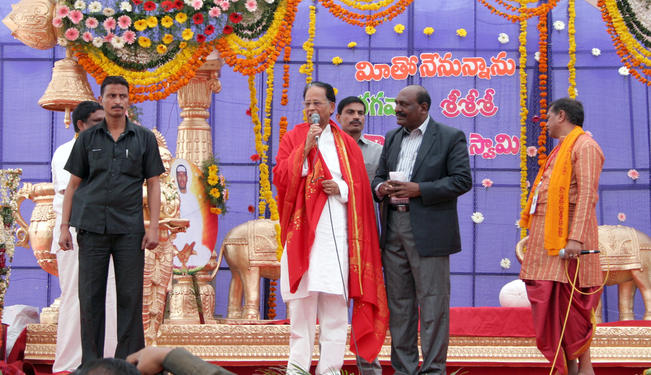 With scores dead and over five hundred thousand refugees in government protected camps, with violence which refuses to abate, Assam is staring at a human tragedy of humungous proportions.< The vote bank politics practiced by the Indian political masters has transformed the North Eastern Indian state of Assam into a simmering cauldron of communal violence between the indigenous Assamese Bodos and the Bangladeshi Muslims who have migrated illegally into the Indian territory. The violence in Assam has exposed the fault lines, and is capable of exposing and worsening the communal divide in Assam. The volatile situation was summed up by Tarun Gogoi, ironically, the Chief Minister of the state, as "living on a volcano".

History
Assam shares an international border with Bangladesh and has been plagued with the problem of illegal migration of Bangladeshi Muslims for the past four decades. The Governor of Assam in a secret communique to the Central government in 2005, revealed that “upto 6000 Bangladeshis enter Assam every day.” As per conservative estimates India is host to around ten million illegal Bangladeshis migrants. Assam itself is inhabited by around five million illegal migrants.

Successive governments in New Delhi have tried to brush aside the problem for the fear of offending and alienating minority interests and alienating the valuable votebank, much to the chagrin of the BJP and its partners like the AGP. Clearly, Delhi has always adopted a myopic view of the problem; and Assam seems to be paying for Delhi’s mistakes.

In 1947, Pakistan was separated into a Bengali speaking East and an Urdu speaking West Pakistan by the geographical presence of India. In 1971, it became clear that religion could not bind the two disparate entities into a nation. The revolt against the linguistic hegemony of the West Pakistanis resulted in genocide of the East Pakistanis.

Unable to withstand the brutality of the Pakistani army, millions of Bangladeshis crossed over into the safer climes of India. Indian states like Assam and West Bengal bore the brunt of this influx. Although India provided sanctuary to these refugees, it nonetheless referred to this influx as “bloodless aggression” which could impair the “economic and political well being” of the country irretrievably.

Indian military intervention against the Pakistani army’s genocide of the East Pakistanis, led to the creation of Bangladesh in 1971.

However, despite the creation of Bangladesh, India did not get any respite from the influx of Bangladeshi Muslims. The magnitude of this influx can only be assessed from the fact that the period between 1971 and 1991 witnessed the growth of Muslim population in Assam by 77.42 per cent as compared to a Hindu growth of 41.89 per cent. The population explosion has subsequently stabilized but even then the decadal growth of 1991-2001 at 29.3 percent for Muslims remained abnormally high as compared to a Hindu growth at 14.9 percent.

Dhubri, a district in Assam, which shares a long riverine border with Bangladesh, exemplifies the illegal infiltration into the state which continues unabated. As per provisional census details for the period 2001-11, the decadal population growth for Dhubri at 24.4 percent was distinctly higher when compared to the population growth of Assam at 16.9 percent for the same period. With the Brahmaputra River providing convenient entry points, the district is being virtually overrun by Bangladeshi infiltrators. Incidentally, Dhubri became one of the flash points during the violence in the state.

The Indian polity, with its penchant for encouraging illegal migration for the sake of vote-bank politics, however prefers the ‘ostrich in sand’ approach to this issue, which has grievous national implications.

Porous and inadequately defended international borders coupled with a lack of political will to counter this menace, has ensured a massive and uncontrolled demographic upheaval in the state. Taking advantage of this demographic shift, the illegal migrants have staked their claims to the resources of the state. This in turn has raised the hackles of indigenous population of the state which is now poised to become a minority in its homeland. The latter are obviously disgruntled. And neither side is in a mood to back down.

The lack of political will to confront this illegal migration manifested itself in the blatantly perverted Illegal Migrants (Determination by Tribunal) Act of 1983 (IMDT Act). The Act was introduced specifically for Assam, replacing the Foreigners Act of 1946 which remains in vogue for the rest of India.

The provisions of the IMDT Act ranged from the bizarre (the state can only act against the illegal migrants on the basis of a complaint and not suo motu); to the tragic (the onus of establishing the foreign origin of the accused lies on the complainant and not the accused).

Such  provisions made it virtually impossible to deport any illegal migrant from Assam. It did not come as a surprise to many when 1,481 illegal immigrants were expelled upto April 30, 2000 based on over three hundred thousand enguiries.

The Supreme Court of India struck down the IMDT Act in 2005 as ultra vires to the Constitution of India. The Court referred to the Act as the “main impediment or barrier in the identification and deportation of illegal migrants." The court also compared illegal migration to “external aggression,” which had made the life of the people of Assam "wholly insecure and the panic generated thereby had created fear psychosis."

In a revealing observation, the Supreme Court called upon the Government of India to protect “Assam from such external aggression and internal disturbance.” Ironically, it was this “bloodless aggression” which India had used as a pretext to go to war with Pakistan in 1971.

The Congress which has been the dominant political force both at the Central level and in Assam post independence, has often been accused of tacitly encouraging this infiltration for their political gains. So far, the Mr Gogoi and his friends seem to be in no hurry to dispel this accusation.

The illegal migrants are mobilized to vote en masse for the Congress candidates as quid pro quo to unhindered access to every national resource. In catering to myopic political returns, the party and the government have turned a blind eye to the destabilizing impact of the socio-economic volatility arising out of this influx. In a statement which is telling  of the party’s abetment of illegal migration, the Chief Minister Tarun Gogoi was quick to rescind his initial statement of Assam “Living on a volcano,” with a “There are no Bangladeshis in the clash but Indian citizens.”

Evidently, the vote bank cannot be disturbed and therefore national interests are being sacrificed at the altar of political expediency. It is disturbing to know that the political class (by their actions) believe that the two are mutually exclusive.

Encouraged by the pusillanimous approach of the governments, the fundamentalists have started manipulating the illegal migrantsfor their own gains.Fundamentalist Muslim leaders in Assam have already issued calls for “jehad” if the indigenous Bodos involved in retaliation during the violence were not arrested.

Even attempts by the Government of India to prepare a National Register of Citizens (NRC) based on the 1971 rolls in the state for an authentic documentation of the population have failed to make any headway in the face of strong opposition from these Muslim groups.

The fundamentalist groups are apprehensive about political power slipping away from their hands, once the process of identification of the illegal migrants is initiated in earnest. That the effort to prepare the NRC is abandoned at the slightest resistance exemplifies the connivance of the politicians with this illicit activity of migration.

Political shortsightedness has resulted in a situation where most of the Indian cities are getting burdened with these illegal Bangladeshi migrants, who have started shifting to greener urban pastures which offer greater economic opportunities. However, it is in Assam where the conflict between the Indians and the illegal Bangladeshi Muslims is in ascendance. Emotions have been running high ever since the migrants started obtaining squatters rights on the lands which they were initially employed to till.

With the demography being dramatically altered by this steady influx, the illegal migrants have started wielding enormous political power in Assam. Muslims have become the majority in 11 out 27 districts in the state and the dominant factor in determining electoral fortunes in 54 out of 126 constituencies in the local assembly. A stage has been reached where no party can expect to attain political dominance without support from the Bangladeshi Muslims.

It is this conversion of the illegal migrants into a political force, which has made the indigenous population apprehensive of losing its identity and culture.

This unfettered illegal migration has ominous implications for national security and socio-economic stability. Intelligence inputs indicate that the notorious Inter Service Intelligence Agency (ISI) of Pakistan is utilizing these migrants as conduits to ferry in terrorists and arms into India. Counterfeit Indian currency with its origin in Bangladesh has flooded the border areas, crippling the Indian economy in these parts of the country.

It is often said that those who forget history are condemned to repeat it. Kashmir is a case in point. Mr. Gogoi and his friends are surely better suited to brush up their history.