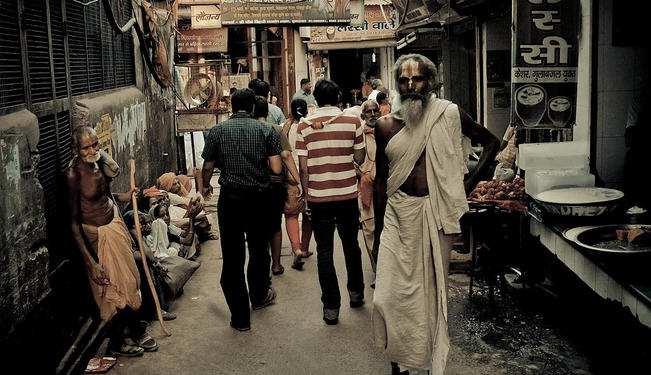 The scarcity of  food, water, education, and transportation is negatively affecting both urban and rural populations in India.

More than sixty percent of the Indian population depends upon agriculture and agriculture-related activities for their livelihood and live in rural areas. When they followed traditional practices, all agricultural inputs were locally available such as seeds, fertilizers, and pesticides. But, after the green revolution, while crop yields increased very significantly, all inputs became commercial commodities to be purchased seasonally from the market. Seeds, fertilizers, and pesticides – all specific to each crop separately – have to be purchased by farmers. Supply of these commodities is totally inadequate to meet the requirements of farmers. People have to wait for days anxiously in queues away from home to buy their requirements. All this involves a lot of money to be available with the farmer. The returns on agricultural produce to the grower are never enough to meet all his expenses plus feeding his family for the entire year, and he is forced to borrow. Banks are supposed to extend loans liberally to the farmers. However, this is also scarce, forcing the farmer to borrow from private money lenders who charge heavy interest. Thus, there is scarcity of agricultural inputs and scarcity of finances. Lately, thanks to the Mahatma Gandhi National Rural Employment Guarantee Scheme (MNREGA) agricultural labour has also become scarce as many workers are taken away by the scheme, causing a scarcity of manpower.

Turning to the food front, the central and state governments are committed to providing essential food items at subsidized rates through the public distribution system (PDS). PDS operates through certified ration shops. In a city like Hyderabad, a ration shop is expected to cater to the needs of about 1000 ration card holders every month and supply them such essential food items as food grains, pulses, cooking oil, and also kerosene oil as fuel. The quantities per capita and subsidized rates are fixed by the government. Actually, it is understood that rations for about five to six hundred card holders are provided by the government every month and that too in several installments. Thus, there is scarcity of food items to the low income groups. The result is forty percent of all children below the age of five are either undernourished or malnourished and even pregnant mothers do not get enough nutritious food during pregnancy. No wonder, then, that the maternal and infantile mortality rates continue to be high and mortality of children up to age five also is quite high. It is only those children who somehow survive up to the age of five that grow up to adulthood. Scarcity of food occurs despite the fact that enough food is being produced in the country for all and government warehouses have stocks of food which either rot or are eaten by rodents. Another scarcity is safe drinking water.

The net result of the scarcity of food and drinking water is that people are prone to sickness, infections, and disabilities. This leads us to examine the availability of medical facilities and access to them for the low income groups. The best hospitals are in the private sector and their number is continuously increasing. They are essentially intended to make money for the owners. Therefore, they are very expensive and beyond the means of most people. On the other hand, multi-specialty hospitals of the government are very few. They provide medical aid either free or at very modest charges. But, they are overcrowded; hospitals are forced to entertain two or three times more patients than the hospitals are designed for. For lack of funds many posts of doctors and paramedical and non-medical staff are kept vacant and much of the sophisticated medical equipment is rendered useless due to lack of maintenance. In a state like Andhra Pradesh with nearly nine crore population there are less than ten multi-specialty government hospitals. Thus, medical aid at affordable rates is very scarce for the poor and low income group families. In fact, one of the two factors identified as the cause of converting an average family into a poor family is serious illness of a family member. Having survived the first five years of their precarious life, children need to get educated. Educational facilities at every level i.e., primary, secondary and tertiary are woefully inadequate and substandard. Much has been written about the condition of our schools, colleges, and universities and it is not necessary for this writer to elaborate on it.  Let it be said that both quantity and quality of education is utterly poor. A recent survey of education at the highest levels globally hasn’t found a single institution in India worth including in the top five hundred institutions of the world. There is acute scarcity in the educational sphere both by way of quantity and quality.

Another essential item for a decent life of an average family is availability of public transport. Inside a city the common man depends on public buses or local trains. These are not adequate for the fast growing cities. Even for long distance travel, the railway system in the country has not spread wide enough after independence. Large parts of India have no railway lines even though they are the cheapest mode of travel for an average family. In the absence of adequate provision of railways, people are forced to travel by bus or stay put at home.

One can write about many other scarcities, such as housing in urban areas or electric power. Suffice it to say that there is not a single item required for a decent life of an average Indian, which is available in sufficient quantity at affordable cost. In most cases, to give an analogy, where a loaf of bread (twenty slices) is required, we have hardly one or two slices. Pieces of these slices are distributed to different sections of the society in a discriminatory manner. The unfortunate fact is politicians seem to have a vested interest in maintaining these scarcities rather than eliminating them one by one. Between elections they use their influence to help individuals in need and hopefully get their votes at the time of election. In the election manifestos they use the various scarcities to make tall promises that if they come to power they will provide everything needed in plenty for the underprivileged sections of society such as scheduled castes, scheduled tribes, other backward classes, and minorities. The election system is such that one gets elected even with hardly 20 percent of the voters supporting the candidate and the politicians hope to get elected with the support of certain targeted sections of the voters. Once they get elected, they have no clue as to how they are going to fulfill any of their tall promises. Politicians may come to power and politicians may go out of power but scarcities of essentials will probably continue forever.