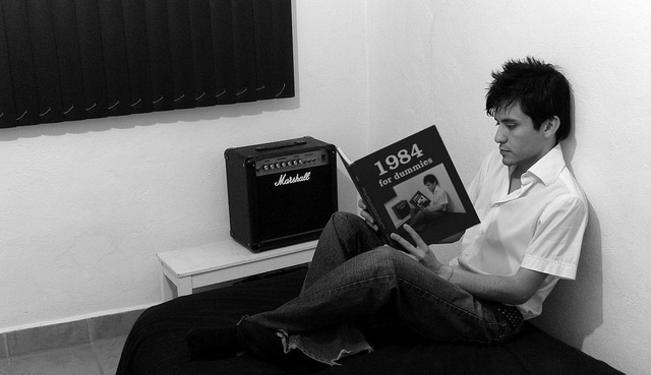 The technological age, where ink has been substituted by software, has brought literature to a crossroads.

The era of digital omniscience – the precepts of its zeitgeist – has changed literature. The technological component, its praxis, has deeply transformed the way we create, communicate and read literature. It is the hostile takeover by the electronic medium, where the reader has become a surfer to whom a novel or a poem is, more than anything, downloaded. But even through mouse clicks and pdfs, literature is a beacon in this transformation; it casts a critical eye on these paradigm shifts and provides a perspective which will convey meaning in and for the future.

The 21st century is defining itself as a paradoxical era. With globalisation and interconnectedness we have the world at our feet, one without boundaries. Yet, whilst this interaction – through instant messaging, email and smartphones – has ostensibly brought us together, it has also riven us apart. This oxymoron concerns not only the dialogue with the “Other”, but it also the way such an entanglement is depicted. We are obliviously distant. The type of language which has been adopted along with this new technology is fostering a kind of illiteracy that prevents any possible comprehension of a classic. Thomas Mann? You need to be a rocket scientist to read that. The west may have higher levels of literacy and education than it has ever had in the past, but there is an increasing apathy and impatience for the way we imbibe language. Now we have new verbs: we tweet, we skype – we utter the dictatorship of the hinc et nunc. The challenges regarding education are therefore immense, namely, the unresolved debate of how these new isms of the www.com era have been changing the humanities.

We often make the assumption that history and social change is progressive. Modern technology has developed at an astounding rate andit is tempting to see it as inherently working towards some superior end. Do we feel this with literature? In the past, with the page only being accessible to a privileged, homogeneously educated few, there was a distinctive hierarchy and highbrow consensus of what texts people should read. There was value placed in the mysticism of historic works and the struggle to comprehend them. We clung to tradition. In everyday life too, people had to confront difficult language. Religion ran its vein through society, and held the monopoly on discourse for centuries. It was only in the 1960s that the Vatican ruled that mass could be conducted in the vernacular rather than Latin. Although this traditional practice was hardly egalitarian, stepping outside the pascalian autopilot of everyday language opens the doors of reflection. It allows us to discover that we are indeed losing something in our living language. Jeanette Winterson recalled how, brought up in a northern English mining townin the 1960s, everyone was familiar with the King James VI Bible. Many working men studied Shakespeare at evening lectures and none of them found it difficult, because it was a type of discourse they had been brought up with. Such exposure relief us in situations where easy language does not necessarily convey meaning as valuably. By supposedly “democratising” language, we lose connection with our “living” past and the aesthetics of its language. It is not just a discloser of meaning, a mirror held up to reality, but something to be played with and enjoyed.

In a sense, this is what authors retrieved in the 20th century. The concept of literature was picked apartand pushed to its very limits. After the horrors of the two world wars, the arts were wounded. “Writing poetry after Auschwitz is barbaric” Adorno famously declared. If society’s meta-narratives – such as belief in a benevolent God, reason or the human spirit – had led us to such atrocities, they are too false and flimsy to be espoused in literature. Gone were the familiar and empathetic protagonists; linear storylines and the comfort of a detached and omniscient narrator. It was Samuel Beckett who went further than any other. He began to dismantle narrative, characters, sentence structure, and even grammar. Idealiter, language should be distrusted, for words can be deceptive. But ironically, what Beckett chose as his paintbrush was the very thing he was trying to negate. For if language is a “veil that must be torn apart in order to get at the things (or the Nothingness) behind it”, then an ineluctable circularity is drawn. The pinnacle of this process was “The Unnamable” (1953) – a self-contradicting title if ever there was one – where we are confronted with a shapeless, characterless voice spouting incoherent nonsense.

Inevitably, the “veil” is built back up again and conceals this “nothingness”. In the west at the beginning of a new century, we have taken on a new self-deception. Most of us have not experienced the same shattering illusions as the generations before us. But although we have returned to the comfort of a traditional form, themes have changed, and literature is grappling with them.

To Infinity and Beyond: Everything is Becoming Science Fiction(ism)

An overwhelming facticity determines us as individuals, for we live in a world that is not totally of our making. This mundane horizon is now, technologically, a rapidly developing mesh, where we lose foothold in the familiar. The ubiquity of science fiction, once a marginalised cult genre, is symptomatic of this change. Authors can sculpt the limits of humanity in a thriving, boundless landscape. This is why science fiction is not a strict category, but more a thread that runs through a spectrum of works. It is a lens through which we can glimpse at “progress” in our world and its repercussion to the human condition. Kazuo Ishiguro, not a science fiction writer by any means, uses clones bred for organ harvesting as his protagonists in “Never Let Me Go” for example. With an unsettling present-day dystopia, he removes the trappings of the everyday that clutter up our perception to show that, in an unalterable situation of despair, love and friendship still remains.

The arts at their heart constitute a critical standpoint regardless of its era. Hence, themes which were developed in modernism and post-modernism are still being forged. To a certain extent, we are that not far from Baudelaire, Woolf, Borges or Brecht. The subversion of axiomatic systems, its mockery through an existential discourse, or the fragmentation of the subject areall still very much present. Novelty is still the sign of death – the singing of the ephemeral and ineffable, ultimately, the triumph of oblivion. There may be no industrial revolution to raise doubts and certainties about progress, but there is the economic apocalypse, the conspiracy of new world orders, new age “heavens on earth” and magic beans. In short, uncanny, bearable absence. Perhaps Robert Musil was a prophet. Nevertheless, intellectuals are still chewing the same stone.

On a more basic level, literature is entertainment, and most importantly, a shared entertainment, a shared partaking in fiction and reality suspension. “Robinson Crusoe” (1709) is often cited as the first novel – at least as we now know it. This is astoundingly recent. Literature was experienced, for much of human history, very differently. In societies where most were illiterate, stories, plays and poetry were performed. Rhythm and oral intrigue were paramount; words needed to not only convey a desired meaning but also the desired sound. If we think of great works of the past, such as Homer’s “Iliad”, Virgil’s “Aenid”, Chaucer’s “Canterbury Tales” or Milton’s “Paradise Lost”, they are epic poems and communal entertainment. Such irony then, that as an increasing number of people became literate and the form of literature changed, this did not connect us more than ever, but made words retreat into the idle and solitary drawing rooms of middle class women.The novel established itself in the trashy gothic and romance genres. We lost something in this shift: the way we read is now self-consciously individualistic.

It is changing yet again in the internet era. For even those of us who still read classics are not free from these changes. Do we read a book until the end? We, the Internet addicts; jumping from website to website; surfing through the “whooshing of headlines”, worshipping pamphlets and abstracts? Well, some of us still do. We can self-select information how we want, hone our personal interests and identities by choosing which blogs we read and which tweets we follow. We have become less patient, we have become… bored. It is thus more important than ever for books to be palatable enough to have mass interest. The Leitmotiv are the promising best-sellers, specialised target audiences and the gracious market research. We now have self-published authors, self-help books, “Plato and Prada”; blogospheres and instant access to commentaries on commentaries on commentaries of masterpieces; e-Books and the “thingness” of a strange compilation of symbols written on a material called paper. All of that, with colour pictures, nice advertising and the reassuring 20 likes of its release. Yes, two “lol”s, one ":-)” and a couple of superfluous labels negating whatever it was supposed to be.