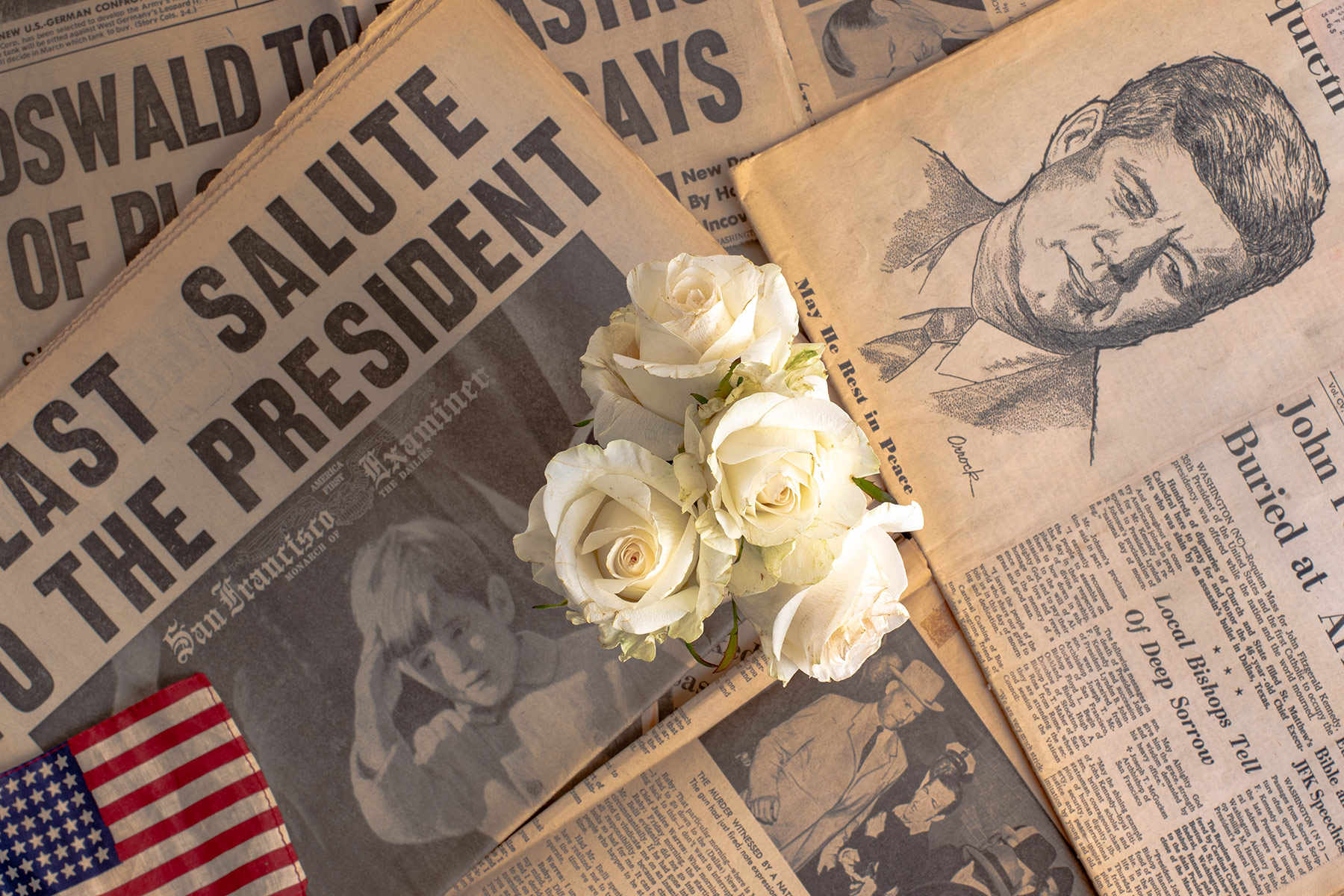 Newspapers with reports about the death of John F. Kennedy in 1963. © Suzette Leg Anthony / Shutterstock

Everyone understands that democracy requires access to the truth about how the government acts, in the past as well as the present. US President Joe Biden’s administration was under pressure to release, on October 26, the carefully hidden documents that his predecessor, Donald Trump, decided to keep under wraps in 2018 when he was pressured to open the archives. The White House has just released a document explaining why it will follow Trump’s lead and kick the can down another road.

The White House memorandum published on October 22, exactly 58 years and one month since the assassination of John F. Kennedy, seeks to explain as transparently as possible its commitment to opacity. Referring to an act of Congress in 1992 that foresaw the future release of all the archived documents concerning the assassination, finally revealing all the sensitive things that embarrassed people in government five decades ago, the White House has produced a long, legalistic document whose message is clear: It’s too soon for the public to know the truth.

The memorandum explains that “the profound national tragedy of President Kennedy’s assassination continues to resonate in American history and in the memories of so many Americans who were alive on that terrible day.” People apparently still want to know the truth. Furthermore, it acknowledges that “the need to protect records concerning the assassination has only grown weaker with the passage of time.” So far, so good.

Two generations later, the government is intent on revealing the truth, but, apparently, not too boldly and not all of it. “It is therefore critical to ensure that the United States Government maximizes transparency, disclosing all information in records concerning the assassination, except when the strongest possible reasons counsel otherwise,” the memorandum states.

The White House believes there are “reasons” that “counsel” its dedicated truth seekers to hide the truth, even truth that is six decades old. Who needs to be sheltered from the light historical truth? Most of the people involved have died and all of the decision-makers are no longer in office. On the other hand, could it be that some of our existing institutions may have had an undisclosed role that would be revealed in the unreleased documents? Can protecting such sacred institutions constitute “the strongest possible reasons” for not admitting documented historical truth?

Clearly, the most sacred institution requiring protection is the one whose very name indicates how central it is to the operations of government: the Central Intelligence Agency. In detailing the compelling reasons for continuing to conceal the truth, the White House inadvertently reveals that the CIA is a prime candidate. The act passed by Congress “permits the continued postponement of disclosure of information in records concerning President Kennedy’s assassination only when postponement remains necessary to protect against an identifiable harm to the military defense, intelligence operations, law enforcement, or the conduct of foreign relations that is of such gravity that it outweighs the public interest in disclosure.”

One part of the excuse the White House offers for delays in disclosure belongs to the category of “the dog ate my homework.” The memorandum states that “unfortunately, the pandemic has had a significant impact on the agencies,” requiring “additional time to engage with the agencies and to conduct research within the larger collection to maximize the amount of information released.”

Once again, the White House wants to “maximize,” which really means to reveal everything except the smoking gun, which, given the precautions taken, must still be smoking. The comedy continues with this remark: “The Archivist has also noted that ‘making these decisions is a matter that requires a professional, scholarly, and orderly process; not decisions or releases made in haste.’” Fifty-eight years after the event, the scholars want to avoid haste? Some “scholars,” including true investigators and forensic pathologists, who have worked on the case for decades and unearthed plenty of troubling conclusions about what actually happened, have had enough time to hasten to their grave or are settled into tranquil retirement after decades of being ignored.

The White House then offers one of the most admirable circumlocutions in the fabled history of bureaucratese: “The Archivist therefore recommends that the President ‘temporarily certify the continued withholding of all of the information certified in 2018.’” The verb “recommends” is meant to sound wise and serious coming from someone with the title, “The Archivist.” But the gold medal goes to the phrase, “certify the continued withholding.” Usually, achievements are certified. “Withholding” is a non-achievement or a failure to act. Yet that is what is being certified. Not only that, but this contains the utterly surreal notion of certifying the withholding of something that was certified. Lewis Carroll wouldn’t have imagined subjecting Alice to this kind of convoluted reasoning.

But there is more. It promises “two public releases of the information that has ‘ultimately’ been determined to be appropriate for release to the public.” The adverb “ultimately” may never have been used as creatively as in this tale of perpetually repetitive postponement. And the idea of “determined to be appropriate” raises the unanswered questions of who determines, when and how. The word “postponement” appears three times alongside the synonymous euphemism, “extension of time” in that paragraph.

The document then repeats the list of institutions that need protection: “Temporary continued postponement is necessary to protect against identifiable harm to the military defense, intelligence operations, law enforcement, or the conduct of foreign relations that is of such gravity that it outweighs the public interest in immediate disclosure.” Apart from the comic effect of justifying the avoidance of “immediate disclosure” nearly six decades after the event, this confession offers the serious historian the choice of possible culprits. The suspects are: “the military defense” (the Pentagon), “intelligence operations” (the CIA), “law enforcement” (the FBI), foreign relations (other governments). The last one may have been added to the list to keep open the idea that the Russians were behind it, the same people who hosted Lee Harvey Oswald and now are focused on attacking upstanding Americans with the Havana syndrome.

The one item in the memorandum that may comfort anxious historians is the promise made bureaucratically official in the following sentence: “Accordingly, by the authority vested in me as President by the Constitution and the laws of the United States of America, including section 5(g)(2)(D) of the Act, I hereby certify that all information within records that agencies have proposed for continued postponement under section 5(g)(2)(D) shall be withheld from full public disclosure until December 15, 2022.” There is now an official date scholars can note in their agendas, but a closer look reveals that the promise is not to release anything before the date. It doesn’t promise to open the cornucopia after it. And if the COVID-19 pandemic endures, the dog will have more homework to digest.

Things become even murkier as we learn about the probable scenario for the coming 12 months: “Over the next year, agencies proposing continued postponement and NARA shall conduct an intensive review of each remaining redaction to ensure that the United States Government maximizes transparency.” Maximized transparency means just enough opacity to effectively hide the truth.

The rest of the document contains specific instructions drafted by talented jurists capable of making black (censorship, mendacity) seem white (maximized transparency). The aim is to ensure people still believe they live in a democracy. One detail, however, seems to point to the crucial evidence that has been obvious for decades to most lucid critics of the Warren Commission’s report. Among the parties charged with reviewing the documents to be released in 2022 is “The Office of the Director of National Intelligence if the agency proposing the redaction asserts an anticipated harm to intelligence operations.” Translated into conversational English, this means that if the revelation of the complicity of the CIA in the assassination is deemed to have a harmful effect on the image of the intelligence community, further concealment of the truth will be justified. Allen Dulles would be proud of this provision.

Some may wonder why a modern administration would go to such trouble. Maybe because it identifies with the same military-industrial complex that killed JFK less than three years after another president, Dwight Eisenhower, dramatically denounced it.

America Is on the Edge of a Critical Precipice