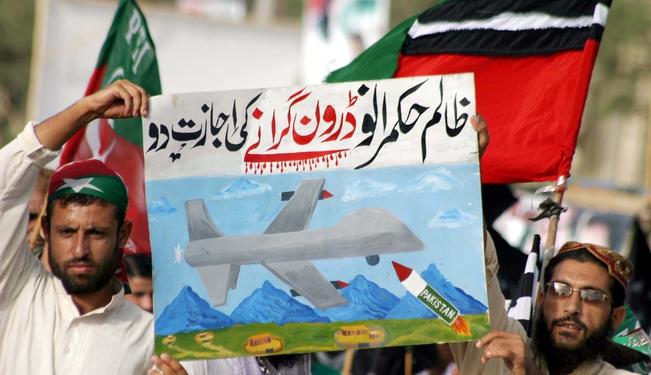 Pakistan’s new leader, Nawaz Sharif, faces acute domestic issues and a troubled relationship with the United States and Afghanistan. His solution calls for an end to US drone attacks, and the start of talks with the Taliban.

Nawaz Sharif, leader of the Pakistan Muslim League-Nawaz (PML-N), begins his third term as prime minister having to face mounting domestic issues, while Pakistan’s relations with Washington and Kabul is in a critical phase. The people of Pakistan and much of the world await with trepidation to see how the new government handles these challenges during the crucial American withdrawal from Afghanistan.

Sharif takes over at a time when Pakistan is living through an increasing militancy within, which most Pakistanis believe is a consequence of an unpopular partnership with the US in the “war on terrorism”. Solutions to these problems are urgently needed and will have a wider regional impact.

Domestically, Sharif’s immediate challenge is to fix Pakistan’s tanking economy, which is a cause of so much religious extremism, social unrest and criminal activity. During the recent vote, militants, branded as Tehreek-e-Taliban-e Pakistan (TTP), effectively thwarted the election campaign of the three coalition partners in the previous government. While over 100 persons were killed during the bloody election campaign, polling went off smoothly enough except for one bombing incident which killed 11 people.

A relatively high voter turnout at 55 percent, compared to 44 percent in the 2008 elections, overwhelmingly voted for the PML-N and Imran Khan’s Pakistan Tehreek-e-Insaaf (PTI). Both condemn the US drone attacks, are against Pakistan’s participation in the US-led war, and seek new terms of engagement with Washington.

On the external front, the US withdrawal from Afghanistan by the end of 2014 and how the Afghanistan situation evolves, pose a major challenge which affects Pakistan’s own peace and stability.

Drones the Point of Contention

The main contentious point between Washington and Islamabad is the US’ secret drone attacks over Pakistan’s tribal areas that have killed 4,700 Pakistanis during the last six years. While they traumatise civilians, these attacks have killed only two percent of high value targets and they breed radicalism, according to a recent study by the law schools of New York and Stanford universities.

Documents presented in the Pakistan Supreme Court in March reveal that Pakistan lost over 49,000 civilians, with its military suffering 15,681 casualties fighting this “war against terror”. This is many times more than the combined losses of others. Damages in destroyed infrastructure are staggering, causing much of social unrest in the country. The Pakistani public has firmly demonstrated that it has no appetite for a US-sponsored military campaign by voting for the two major parties opposed to the war.

Sharif believes that the drone strikes over Pakistan’s tribal areas is a direct infringement of Pakistan’s sovereignty and must stop immediately. His political rival, Khan, vowing to shoot down drones, blames US actions for rising extremism in Pakistan. Both state publicly that fighting the militants is not the way to resolve terrorism. For Sharif, “talks with [the] Taliban [is the] only option”. Similarly, the PTI, which emerged as the leading party in the sensitive Khyber Pakhtunkhwa (KPK) province bordering Afghanistan, is seeking consensus to begin talking to the militants.

The United States will be worried with such an approach; especially if it leads to the Pakistan army’s withdrawal from tribal areas creating a power vacuum, which the militants could easily exploit to launch attacks against the coalition forces. The army cannot keep sacrificing its men in a war without end, with little public backing.

Washington would be wary of a repeat situation when overland NATO supplies were torched along the way, some allege, with implicit consent of Pakistan security forces. In a process of withdrawal, this would be a nightmare for the US. Appeasing Washington by publicly condemning and privately condoning drone attacks, like the previous regime did, will not work and will dent the new prime minister’s credibility with the people.

There are layers of interest, both local and foreign, in this militancy in Pakistan. Its current phase corresponds to the troubles in Afghanistan. Sharif should be mindful of examples of earlier botched agreements with the militants; they fail to understand that for any agreement to succeed, Islamabad must also be seen to dissociate itself from the US war. If that does not happen, no bargain can hold.

Relations with Washington depend also on the Afghanistan situation leading to the American withdrawal. After contemptuously refusing to talk to the Taliban insurgents for years, the US is belatedly seeking to talk to them, leaving little time for a negotiated settlement. The US departure from Afghanistan will create an enabling environment for peace within Pakistan that everyone needs to support.

Despite campaigning on opposing “America’s war”, a visibly chastened Sharif hinted as much when, on May 13, he said he would support “our friends”, the Americans, as they prepare to withdraw from Afghanistan.

With this commitment to “our friends”, Pakistan too expects that its voice, expressed through an overwhelming vote, will be heard loud and clear and more importantly respected in Washington.

Sharif will need all the wisdom and understanding from the US, and good luck to steer Pakistan out of its complex challenges.